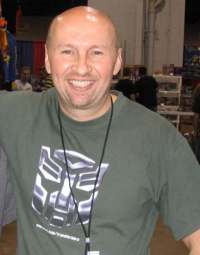 The Transformers Hispanos boards have posted an interview that they conducted with Transformers comic book scribe/historian/fan, Simon Furman.

Check out the translated version of what Simon had to say here.


"5. You always seem to have a lot on your plate! So what other projects are you working on right now? Any news or teasers you can throw in about The Thirteen?

SF) The Thirteen is probably not going to happen for a while, as it’s become more of a Hasbro thing than an IDW thing, and Hasbro need to crystallise the whole concept before it can be turned into a comic book. I think and hope it will still happen, as it’s a story I’d dearly love to tell, but I have no firm grasp or when or in what form it will eventually see print. Other than that, I’m working on Tales of the Fallen for IDW, Transformers UK vol 2 for Titan, Starcraft for Wildstorm, a movie script and I have two books out in June: Transformers: The Movie Universe and Rad Robots."

"7. I usually say you are to Transformers what Straczynski was to Spider-man (you made it look fresh again and more mature than it had been before). My little brother calls you “the Chris Claremont of Transformers” and I think you can understand why. I read somewhere that you’ve actually been influenced by Claremont’s X-men multiple subplots...

SF) Yeah, I got a lot out of Claremont’s X-Men run. Mostly how well he managed multiple characters and sub-plots, something I’ve applied to my Transformers work as much as I can ever since. I always love to have other storylines building in the background while the main action is unfolding. The sense of brooding mysterious things to come helps maintain momentum in a monthly comic, I think. But right from the get-go, I never tried to tell anything but ‘mature’ stories in what was primarily a kid’s comic. I hated dumb or lazy storytelling when I was a kid and reading comics, so I wasn’t going to inflict that on my audience."

"14. Now, saw this somewhere else and liked how it turned out so let’s do some word association if that’s ok with you.

- Beast Wars – Bob Forward, lovely chap and he really got me going on the TV animation side of things.
- Animated – Fun! I like their dumb, lovestruck Dinobots.
- Grimlock – Greg Berger, another lovely chap.
- Nemesis Prime - Badass
- G2 – Some of the most fun I’ve had in the many worlds of Transformers.
- WW Age of Wrath – Unfinished business!"

See the rest of the interview translated to English here.

Posted 3 days ago
News Categories: Toy News, Movie Related News, Cartoon News, Comic Book News, Site News, Rumors, Event News, Digital Media News, Collectables, Game News, Sponsor News, Site Articles, Store News, Company News, People News, Press Releases, Sightings, Reviews, Unlicensed Products News, Auctions, Transtopia, Interviews, Knock Offs, Collector's Club News, Editorials, Heavy Metal War, Podcast, Contests, Book News, Top Lists
Click here to post your comment about this news story!
Re: Simon Furman Interviewed At Transformers Hispanos (958720)
Posted by Fearing on July 20th, 2009 @ 8:20pm CDT
Nice interview. I hope the 13 project gets moving eventually. I'd love to see it as a non continuity specific/non continuity conflicting story at least for the G1 universes. As much as I enjoy IDW's G1 stuff, I'd love to see more stuff that could fit into the original comic or animated G1 universes or the DW one. Probably tough to do though.
The unifinished business comment about Age of Wrath is too much of a tease though, I really would like to see that finished (as well as some resolution to the War Within universe as a whole... heck the whole DW universe as a whole... or at least mesh it into the original G1 animated universe and keep it going like that some how. Guess it'd just be nice to see the original G1 universe get some love and some refinement some how some way. Maybe someday.)