Sneak Preview of Nintendo DS version of War For Cybertron 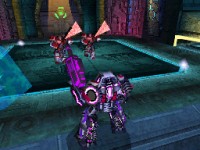 Kotaku.com, the Godzilla of Gaming Websites, has given us a big sneak peak at the Nintendo DS version of War For Cybertron. Check out a little bit of what they have to say and a couple of pictures below....

Transformers: War For Cyberton on the Nintendo DS is being made by Vicarious Visions, the veteran studio behind other, recent well-regarded portable 3D Transformers action games. Like the previous ones, the new entry will be sold in Autobot and Decepticon versions, though this time the games won't link to a web-based meta-game war between the owners of each.

...while you can check the rest out at Kotaku here.