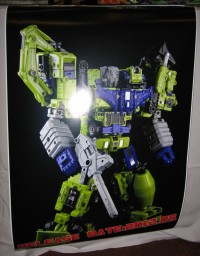 Haven't spent enough money on your massive TF Hercules yet? TFC announced 007 - Hercules upgrade at this years Animation On Demand. This set will trump other 3rd party products currently under development by offering several products in one kit. This set will include:
-a new, G1 influenced head
-an optional "rage" face
-a battle damaged visor
-a new rifle with combining features
-new shoulder extensions that will add even more girth
-new forearms that not only appear more G1, but allow the treads to fold up to the body and seem more reminiscent of the G1.

This set is scheduled for a May release but no information on price has been made available.

Would like to get the new gun, but I don't really care about anything else in the set. A proper G1 head might have swung me, but then again those shoulder extensions will probably allow for a greater range of movement.

Kinda at a loss right now, I really like the gun, definitely think anything they could add to Mad Blender's arsenal is welcome. Don't really need/want a new head. I will agree that the shoulder extensions are needed!

I only really want the shoulder addition though, the rest isn't all that interesting to me.
Re: TFC -007 Hercules Upgrade (1349036)
Posted by GetRightRobot on February 18th, 2012 @ 8:26pm CST
I'm ashamed to admit that I will buy this. I don't care if it's another 100 bucks. Those treads on the shoulders, wider, bigger gun, G1 forearms, optional faces and head. Throw in the reprolabels stickers and....With what I will end up spending on this guy, I could have bought a Star Saber in the box....

Absolute Zero wrote:It's getting kinda out of hand with the third party upgrades.

Dude, out of hand is the 7 upgrades I have on my Classics Magnus!

I can even add the iGear or Dr. Wu face and a God sword for 9 upgrades on one figure! THAT is out of hand!

1. Gun: is awesome. The problem with the original combined gun is just that - the combination, though very, very good, looks a little gimmicky. This remedies that. Verdict: Want it.

2. Shoulder Extensions: are awesome. Hercules has decent shoulder articulation, but as anyone who owns it can attest to, there is much to be desired in that arena. This remedies that. Verdict: Want it.

3. Rage Face: pretty cool. I honestly like the Dr. Wu design better, since it has the wide open mouth versus and allows for light piping to show through the mouth. But Dr. Wu "borrowed" the design, and I'm wary of them. TFC's design is one of more controlled rage, and I though I like Wu's design better overall, the subtlety of TFC's design is growing on me. I wouldn't buy it outright, but as part of a kit, I'll take it. Verdict: Want it.

4. Head/Visor: 'Meh'. The thing TFC did very well with Hercules was walk the tightrope between the blocky, retro design that is a G1 transformer and the smoothly integrated modern styling that collectors have come to expect. The new head is therefore a backwards step. It's blockier, less elegant, and though styled right, I don't think it fits with the overall aesthetic as well as the original head does. And the visor? No thanks. I like my Hercules without it. Verdict: Don't want them.

5. Forearms: NOOOO!!! Again, it's the tightrope (see 4). I love the Hercules arms because the whole toy is perfectly integrated, with the treads as forearms. One reason I bash MakeToys' Giant is because I hate the look of just sticking the vehicles on as shoulders and adding separate mechanisms for the forearms. I know it's more G1 accurate, but I feel it's too clunky. On the flip side, there are peg holes that might allow for Exgraver's shovel to be used as a melee weapon, and the design may give better arm articulation. But those positives don't outweigh the negatives to me. Verdict: Don't want it.

Overall: I would get this at a decent price point. The overall package is nice, and I might change my mind on a few of my more negative assessments. Plus, I totally respect the fact that TFC is preempting efforts to '3rd Party' their own 3rd Party product. Honestly, it's what Hasbro/Takara should have been doing all along.

That said, TFC, you're breaking my heart. Stop stealin' my money!

It is also smart to put out many of the upgrades people have been asking for.

While I'll probably get this set simply for completeness, I doubt I'll use any of it.

I may prefer the added shoulders, but how I have him on the shelf, he looks fine the way he is.

Toss in the purple barrel though, and I'll definitely get this!

Make a barrel upgrade that can stay in bot mode and Devastator and all his parts will be perfect IMO.
Re: TFC -007 Hercules Upgrade (1349122)
Posted by Gauntlet101010 on February 19th, 2012 @ 12:05am CST
You know, I just realized that if they colored that head right you could slap the visor on it and make a good cartoon head. Maybe that's what they're thinking? Because I'd buy the entire set just for that. Yes, I throw away my money like that!

Someone's bound to make a purple barrel. You wouldn't even need to make an entire barrel either, the "skin" is just screwed in.

Head aside one other thing I'd want ... is a reworked HL hip. From somebody else, prefferrably. I applied the hip fix and lubed it, but ... I don't trust it to work, so I haven't pressed my luck.
Re: TFC -007 Hercules Upgrade (1349123)
Posted by Oilspill on February 19th, 2012 @ 12:06am CST
Woah, nicely done. Though I think TFC's "forearms from treads" design is genius and don't really need the more G1-accurate arms as separate pieces.

Anyway, I'm interested, but it depends upon the cost and seeing the final colours.

I would definitely be interested in more G1-accurate heads for the individual bots though. I'd happily pay $20 for a 6-pack of heads.
Re: TFC -007 Hercules Upgrade (1349124)
Posted by wilcosu35 on February 19th, 2012 @ 12:21am CST
good effort from TFC, but i'm not interested in this
though he could use some better shoulder acticulation, i think hercules looks fine the way he is, especially with the tread-forearms. the whole combiner is just perfectly integrated
Re: TFC -007 Hercules Upgrade (1349132)
Posted by El Duque on February 19th, 2012 @ 1:11am CST
TFC Toys have posted official images of their recently announced TF-007 Rage of Hercules upgrade set. The display at AOD listed a May release date, their facebook page states "Product will be release on 20th". A May 20th release date perhaps? No information on pricing.

Thats all I can really come up with right now...

I will say my FP Bruticus is now officially...

I do wish TFC would have given us a redesigned head that was a bigger departure from the original. And the rage face make me think he needs more fiber.
Click here to view additional comments about this topic at the Energon Pub Forums ...