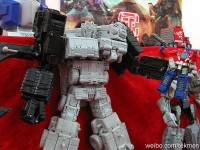 TFC Toys made quite a showing at a recent toy convention in China. They had many of their upcoming unofficial Transformer related products on display including the one you're probably most interested in hearing about Project Deva, or as he's now called Hercules. We see him in fully combined mode........sort of, he's assembled using two Structors (aka Scrapper) and two Scavengers. They've also given their own names to Hook, now known as Dr. Crank, and Longhaul, now known as Heavylabor. Structor is also seen in both modes.

Also on display were their WWII style PCC upgrade limbs. We see them in full color, in both modes, and combined with PCC Commanders Heavytread and Bombshock.

Here we see their Reflector-esque trio DSLR in a black deco and it appears their lens accessory transforms into a weapon of some sort with a light-up feature.

Not wanting to miss out on repaint opportunities we see Ultra Magnus, Thundercracker, and Skywarp Targetroids and a black version of Primars.

Lastly Junkion Blacksmith had their upcoming Headmasters on display.

Please, sir. May I have some more? Bonecrusher and Mixmaster?


That is exactly what I thought of!

Hercules, is art! I love Hercules. Perhaps it is because he resembles some other decepticon combiner... Oh well Hercules is my favorite combiner!!!!
Re: TFC Toys: Updated Images (1215941)
Posted by Sodan-1 on May 1st, 2011 @ 7:49pm CDT
I'm not a fan of the PCC line either, but those units attached to Heavytread look pretty damn cool. Not enough for me to invest, but a vast improvement.

Apart from giving us our first idea of what a complete Devastator would look like, aswell as names, they haven't really given us anything new (i.e. RELEASE DATE & PRICE!!!!!)

And I wouldn't be surprised if that all-black colour scheme on the DSLR will put a lot of its supporters off.
Re: TFC Toys: Updated Images (1215948)
Posted by metaphorge on May 1st, 2011 @ 8:45pm CDT
I'm liking the not-Ultra Magnus, not-Blaster and not-Megatron Headmasters are looking pretty sweet; I'm not really sure what I'm supposed to DO with them though.

Also no-one seems to have mentioned the Ultra Magnus-style repaint of Opti-aim (or whatever the Convoy-inspired Targetmaster ended up being called); have we seen it before, and what will it come packaged with if they stick to two-pack shakers selling these).

Hasbro should hang there head in shame. Or at least take some notes on what combiners are supposed to look like when they see what these guys are puttin out.

It's not as hard as Hasbro seems to make it.
Re: TFC Toys: Updated Images (1216025)
Posted by krenger99 on May 2nd, 2011 @ 2:29am CDT
Get to Target if you haven't got a Bombshock figure. They have the same mold on clearance. It's called: Steelshot w/ Beacon. It's the exact same mold but as an Autobot Variant.

Devastator is going to devastate by bank account. Based off of the sheer size and detail, he'll be going for several hundreds of dollars, if not over a thousand, for the set.

The new camera trio looks very nice but I think it lacks something. Maybe it's a little too modern looking, I'm not sure.

bvzxa wrote:Now the bigger dilemma will come down to whether the Crossfire03 set by FP will be worth the money to buy if you didn't have Energon or Classics Devastator, or just go out and get this set. Though FP's project should be brilliancy, this Deva' is a better representation. I really want it. Please let the quality be on par with FP.

Yes...because it's not going to be for Dev...at least not according to Venksta, who's pretty plugged in with the on goings of FP.

Agreed, it isn't set in stone to be Devy. But I'm not certain anyone has come out and said it wasn't either. Venksta has said things to make it seem it was and wasn't so I don't know what to think.

I believe FP actually said themselves they wouldn't be doing Devastator and that Crossfire 03 had nothing to do with Combiners. One of the reasons for not doing Devastator is that they stated they won't be tackling projects others are already doing since their G3 trailer tanked due to the BTS Classics Prime trailer.

That sucks about the trailer. I still want one but I don't have a way to display it. I didn't like the BTS trailer at all.

I guess I jumped on the bandwagon of thinking Crossfire 03 would be Devastator. That's cool because every time I see this Devastator it makes me glad I sold my Walmart set. I still have the Target Constructicons I got from CP which I am fond of, but if this project comes to light...I will have a true Deva'.

Off topic a bit:
I would love to see some original designs into a combiner. If Cx03 is a new group, aww man I can't wait because I want to recreate Scramble City so bad...my wallet must be fortified!!!

He means the sales tanked, not the trailer. The trailer itself is amazing.

I recall them saying that at Botcon a couple years ago I believe. Then Venksta came out and said they changed their mind and to not be surprised if we saw it first in green. Shortly after he said that, he came out and pretty much retracted the entire statement. So, who knows really. It will be impressive most likely no matter what it is.

My biggest pull for them to do it is scale. The TFC Devastator will most likely be cool, but out of scale with all the other combiners I own.

No I am aware that he was talking about the sales...duh?

I was commenting that "yeah it sucked it didn't sell well" which I probably should have included in my earlier post.

I see there are more pics added. The camera does not look bad to me. I guess closer pics will give me an idea if I want to drop the cash or not. I like the size. P.E. toys don't do it for me. Shadow warrior was way too small and should have been $30 less than what I paid for it.

krenger99 wrote:Get to Target if you haven't got a Bombshock figure. They have the same mold on clearance. It's called: Steelshot w/ Beacon. It's the exact same mold but as an Autobot Variant.

Please be a reasonable price

... hell even if he isn't, I think I could get em' anyways due to my lack of interest of the next movie line (with the exception of like 3-4 toys)

Until then...nothing from me.
Re: TFC Toys: Updated Images (1216084)
Posted by Maldroth on May 2nd, 2011 @ 7:32am CDT
I keep seeing people want the purple chest shield on this guy. I think it looks fine with out it. Considering that piece was to cover up gaps in the original robot, this one doesn't seem to need it. The only thing holding me back on this is how they choose to release it and the price. If it's way above the average of what we see for customs then I might have to pass.
Re: TFC Toys: Updated Images (1216086)
Posted by GuyIncognito on May 2nd, 2011 @ 7:54am CDT

Kibble wrote:^^ Not to mention if Hasbro did this and charged $500-600 "we" would probably throw a friggin' sissy fit of epic proportions. As T-Mack stated, they're perfectly capable, it's just not necessarily in their best interest...and probably couldn't put out the same figure and still adhere to safety laws.

But it wouldn't need to cost anywhere near $500 if it was official would it?
And this devy isn't gonna break the supreme class size either is it? I thought rough comparison shots put them around deluxe size each? Supreme starscreams arms and legs are biger than deluxes.
Or am I just talking out my ar*e again?

I'm afraid only half out of that rear end.

You see, the cost mainly comes from:

- Length of Development
- Size and Number of pieces on the toys
- Number and size of Production Runs
- Promotion, including commercials, TV shows and comics.

Factors that influence the above include:
- Target Audience and by extension, projected sales.
- Local Toy Safety Laws

All is tied within a budget, and the development of a proper Devastator would take so much resources, it would probably take the budget of a line and a half! Can't really do much with a line consisting of a single figure, can you?

so I was half right then?

That's the kind of answer I was looking for. Cheers. So, I'm guessing the reason it's different today than back in the 80's is due to 2 things: Each constructicon back in the day had virtually no parts due to their simplicity compared to today's standards thus cheaper to produce, AND they were in the cartoon?
That's why Energon combiners only had 2 of the 4 limbs designed, to cut all of these factors in half. And again, they were in the show. Understood.

I wonder how succesful sales of the ROTF Devastator set were? Or the individual transforming 'constructicons' put out for that matter. Be interesting to see if having a blockbuster movie behind them did actually substantiate their belief in their system. Or would any loss made on toys not matter due to the ridiculous money Hasbro would get for rights and stuff?