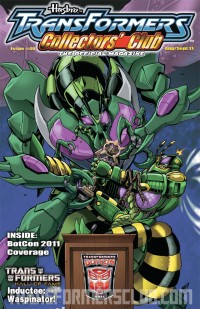 The Official Transformers Collectors' Club has revealed the cover art for issue #40 of their TFCC Magazine. The cover features the Beast Wars and Animated versions of this year's Hall of Fame winner Waspinator struggling for the trophy, by artist Matt Frank. Be sure to visit the The Official Transformers Collectors' Club to view a full sized image of the cover.

The next issue of the TCC Magazine will begin shipping in the next couple of days, but the cover can be seen right now! Click the story thumbnail to see the incredible cover done by Matt Frank (the artist behind this years Hall of Fame Waspinator profile art). In this great scene created just for the TCC Magazine, we can see there is a bit of a disagreement between Beast Wars Waspinator and Animated Waspinator as to whom actually receives the trophy for "Waspinator's" induction in to the Transformers Hall of Fame!

Issue 40 will give club members a detailed look at BotCon 2011 and the Transformers Hall of Fame as well as ALL-NEW MTMTE character profiles, an interview with Transformers Prime Voice Actor Steven Blum, Part 4 of the ongoing comic "Transformers: Battle Lines" and more!

To each his own though.

The Dude wrote:PLEEEEEEEEASE let this ship with Sideburn!

. Unfortunately, Sideburn was not with the magazine

The Dude wrote:PLEEEEEEEEASE let this ship with Sideburn!

This is going out to all members.

Provided that your membership was in good standing on March 16th (which makes you eligible to receive this year's free figure) the domestic figures are now in the mail. If you joined after that date, you will receive next year's figure.

Your Sideburn will arrive via standard rate mail so this can take as much as 3-4 weeks. If you do not receive your figure by Sept 1, please let us know. Please do not contact us before that date.

The mailing list has been CASS certified and addresses have been changed based on the Post Office's change of address software (COA). However, if you have moved in the last month, the address on your piece may not be correct. You will need to arrange with your old Post Office to have your standard rate (used to be called 3rd class) mail forwarded as they do not do this automatically. You have to pay them to have your standard rate mail forwarded.

The foreign mail pieces will depart by next Tuesday. They go via DHL Worldmail. DHL forwards them to your county's mail system and then your postal carrier will deliver your piece. These should be in your country's mail system by the end of next week.

Thanks for your patience with the delivery on these figures!