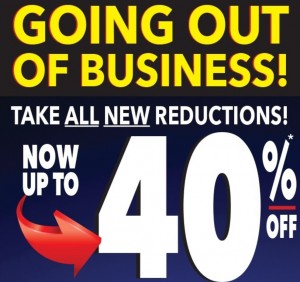 In the wake of Toys R Us Rejecting the buyout bid of the CEO of Bratz, the company has sent out an email confirming that, as of today, clearance sales have now reached up to 40% off, from the 30% they've been holding on to for several weeks.
This all but confirms the initial reports of the sales going up 10% a week, as it now appears the chain just attempted to give themselves a head start of sorts by starting the sales at 30% and holding it at that percentage for exactly three weeks. Now those three weeks are up, and we're seeing the discounts raise as a result. Time will tell if this theory is entirely true, being confirmed if they raise the clearance to 50% next Friday.

As it relates to our own fandom, Seibertronain AlvinC reports that Transformers toys are now 15% off, up from 10%.
Stay tuned to Seibertron.com for more updates during the final weeks of Toys R Us. 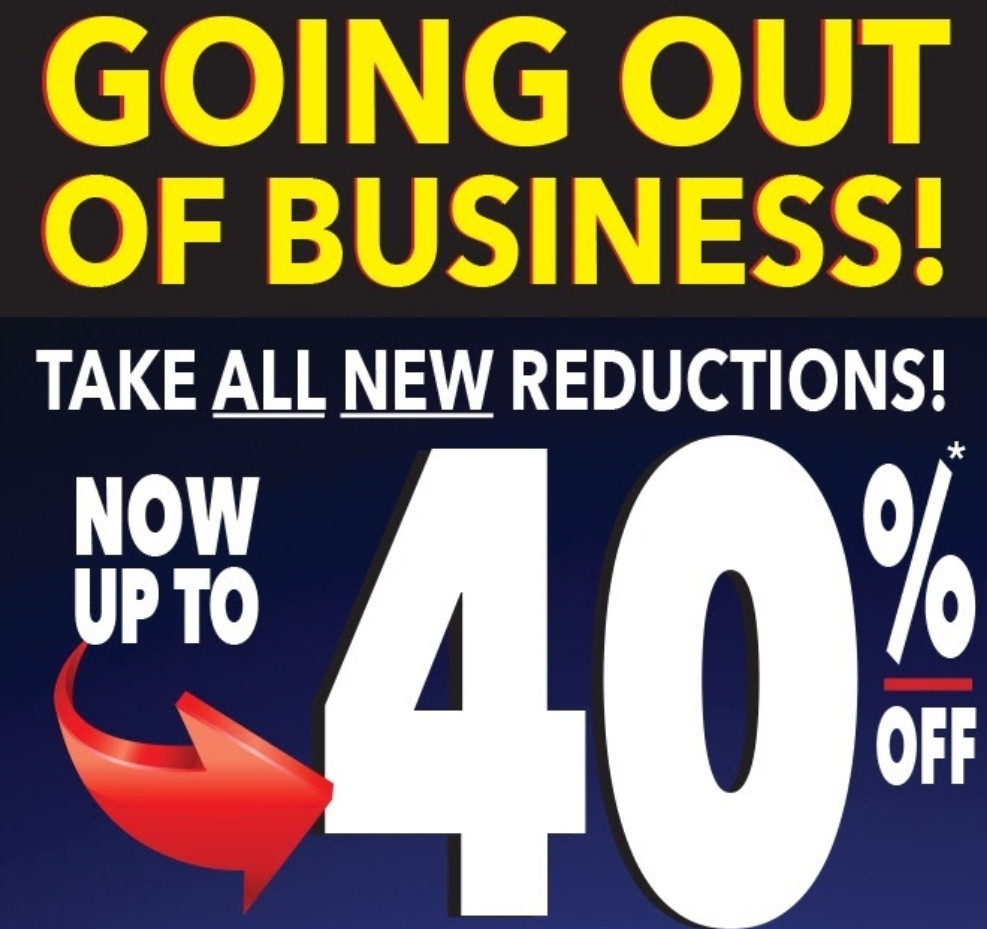 Posted 4 days ago
News Categories: Toy News, Movie Related News, Cartoon News, Comic Book News, Site News, Rumors, Event News, Digital Media News, Collectables, Sponsor News, Game News, Site Articles, Store News, Company News, People News, Press Releases, Sightings, Reviews, Unlicensed Products News, Auctions, Transtopia, Interviews, Knock Offs, Collector's Club News, Editorials, Heavy Metal War, Podcast, Contests, Book News, Top Lists
Click here to post your comment about this news story!
Re: Toys R Us Raises In-Store Clearance Discounts (1954558)
Posted by Rated X on April 20th, 2018 @ 5:37pm CDT
At this point, TRU going out of business sales isnt even relavant to transformers collectors anymore. I went in a TRU last week and they only had a few one step changers left. The entire action figure aisle was looted.
Re: Toys R Us Raises In-Store Clearance Discounts (1954571)
Posted by DeathReviews on April 20th, 2018 @ 6:15pm CDT
Indeed. The bigger discounts would be wonderful, if everything good hadn't already been taken. There's nothing left but the chum now. Though I did see about 12 boxes of the 'Infernicus' TRU exclusive on the shelf at our nearby TRU, and about 3 'Cybertron' figures.
Re: Toys R Us Raises In-Store Clearance Discounts (1954578)
Posted by Ironhidensh on April 20th, 2018 @ 6:50pm CDT
Yeah, that 40% off is bullshit. It's only on an extremely tiny selection of items. Most things are only 15% off at most. Hell, the fucking Legos are still only 5% off.

This right here. My TRU is still 10% off everything. Normal sales gave discounts for more than 10%.

Absolute Zero wrote:Aside from some stuff no one wants, like movie figures, TRU hasn't been getting anything in for Transformers.

If no one wants them, then how come some toysrus stores are completely cleaned out of TFs at only 10% off?

Also, why are all these toys sold out at only a 10% discount when HTS routinely has 20% off and the older stuff just sits there?
Re: Toys R Us Raises In-Store Clearance Discounts (1954628)
Posted by Wolfman Jake on April 20th, 2018 @ 11:22pm CDT
I went in tonight to see what was shaking now that things are "up to 40%." Of course, I didn't see anything that was actually 40% off, but that's beside the point. The store did claim to have "trucks coming every day" so they could liquidate their warehouses too, so maybe some more Transformers stuff will come before the bitter end. I was happy with what I picked up, though. Mostly just a few TRU exclusives I hadn't gotten yet, like Infernocus and Skullotron from TLK and Studio Series Thundercracker. Also picked up TLK Berserker, as it was the only other movie on the shelves that I needed and didn't have. My partner and I are going to take a trip around the Twin Cities tomorrow to check out the other stores that are still open and see if they've got anything different in stock.
Re: Toys R Us Raises In-Store Clearance Discounts (1954662)
Posted by Absolute Zero on April 21st, 2018 @ 3:58am CDT

Absolute Zero wrote:Aside from some stuff no one wants, like movie figures, TRU hasn't been getting anything in for Transformers.

If no one wants them, then how come some toysrus stores are completely cleaned out of TFs at only 10% off?

Also, why are all these toys sold out at only a 10% discount when HTS routinely has 20% off and the older stuff just sits there?

We have at least a dozen Infernicus. And still have 3 Windblades from RID. The only thing that moved quickly were the Power of the Primes, and those don't appear to be coming back.

I spoke to the liquidator. We are not getting anything new. What we have in the warehouses is what we are getting. No new lego sets, no new consoles, no new Transformers. If your store hasn't had wave 2 figures by now, then they likely won't get it. Now, it's possible we could get some old MP figures, but we don't know whats in the warehouse, and we don't know what we're getting until a day or two before the truck arrives.

o.supreme wrote:Not the closest TRU to me, but one about 10 miles out, on the other side of town. LOL...Yeah Windblade is definitely a "fan favorite"....

That's not fair ... that's the BS "face shield" version. Notice the regular version (of which the one shown in your photo was a remold) has been nowhere to be found in quite a while.

i like the face shield version. She becomes my Reformatted SKYFEATHER!
https://tfwiki.net/wiki/Skyfeather
Re: Toys R Us Raises In-Store Clearance Discounts (1954763)
Posted by carytheone on April 21st, 2018 @ 12:27pm CDT
Our TRU was a blow out before the liquidation and is an even bigger blow out now. I was there today and was shocked that the vast majority of the store has only increased to a 15% discount.

I will give you a little spot of bright light though. I spotted and purchased the studio series Thundercracker today for just a hair over $25. That figure was not there a week ago.
Re: Toys R Us Raises In-Store Clearance Discounts (1954767)
Posted by Bronzewolf on April 21st, 2018 @ 12:47pm CDT
Why is it that they can't run a clearance sale correctly? I mean, seriously, I've never been able to wrap my head around their business decisions and their prices when they were a thriving company, let alone now. I'm just scratching my head. In most cases, that 10%-15% only takes the products down to the regular retail price of Walmart and Target. We haven't even hit an actual "discount" on most toys yet. I refuse to still pay $10 for a TLK Leigon class figure, which is what it STILL COSTS, even with the discounts.
Re: Toys R Us Raises In-Store Clearance Discounts (1954779)
Posted by carytheone on April 21st, 2018 @ 1:22pm CDT

Bronzewolf wrote:Why is it that they can't run a clearance sale correctly?

Well they fucked up their normal operations, why should they be capable of a "liquidation" sale.

william-james88 wrote:That was the most low ball offer I have ever seen, literally pennies on the dollar. TRU Canada's real estate is estimated at close to 1B$

Does TRU own the real estate the vast majority of their stores sit on? I find that hard to believe seeing as how every one I have ever seen has been located in a strip center, most consisting of several other big time retailers. So if they do not own the property and are leasing it, why would that factor into the buy out? That would be for the buyer to deal with once possession was transferred and said buyer had to determine whether to keep said stores located where they are or move locations depending on desired leasing agreement/pricing.
Re: Toys R Us Raises In-Store Clearance Discounts (1954993)
Posted by lakebot on April 22nd, 2018 @ 1:13am CDT
I was able to stop by our local TRU today and would echo pretty much what was already stated: most toys people would be interested in actually purchasing(IMO anyway) are nowhere near the percentage off the giant signs at the door suggest. They do have what I would consider a fully stocked store though. I mean, when you walked in, had you not known the store was closing, you'd never have guessed.

I think the failure here lies in the fact that most of what is there is obviously not brand new and a lot of it is actually old/older(although finding the new Jurassic World toys there was a treat). Ok, that makes sense as they are closing. Why expect new product? However, as a collector/fan/parent shopping for their kids/whatever label you choose, for me to be driven to buy something, it needs to be something I don't already own or something that I may have passed up (for one reason or another) and now I've been given a new reason to buy it.

Simply put, they're not giving anyone a reason to buy a lot of what is on the shelves. The only figure they have left I'd be willing to consider is Cybertron and it would have to have such a steep discount for me to consider it, at this rate, I don't think it's happening.
Re: Toys R Us Raises In-Store Clearance Discounts (1955309)
Posted by william-james88 on April 22nd, 2018 @ 11:27pm CDT
Here's a fun fact. Did you know that there were 93 Toysrus stores in Germany, Austria and Switzerland combined? That's quite a bit of stores for such a small landmass. Other fun fact, all these toys are now owned by Ireland's very own toy chain Smyth's Toys. That's right, the family owned chain which only had 110 stores yesterday will now add these 93 to their tally of owned stores. They also inherit 4 Toysrus websites and will take on all current staff and management.

This is great news since that means it is business as usual for fans, and more importantly Toysrus employees, in Germany, Austria and Switzerland. It also brings Toysrus back to its routes of being a family entreprise.

Here is what Smyth's Toys co-founder Tony Smyth said about the deal: “We are convinced that multi-channel toy retailing will develop positively and that we can successfully introduce and expand our brand in Europe.”

This news was reported by Reuters and sent our way thanks to TF fan Alex.

Re: Toys R Us Raises In-Store Clearance Discounts (1955340)
Posted by Rated X on April 23rd, 2018 @ 1:06am CDT
And yet another TRU article that has nothing to actually do with Transformers. This obsession with TRUs demise is getting ridiculous. Its a toy store. Someone else will rise from their ashes to sell Transformers. Hello...Transformers anyone?