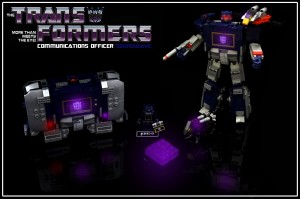 Here's something a little different, and very cool, for everyone's Friday afternoon. Construction toy designer from Germany, Alexander Jones, has spent quite some time developing, planning and building a set of over thirty Generation One Transformers figures out of Kre-O bricks to celebrate in his own way the 30th anniversary of the franchise. He reached out to Seibertron.com for an exclusive interview about what went into the project, and share a video and images from the models. All 34 will finally be revealed on 8th May, but check out what he's done so far below!

- What inspired you to make the new Transformers out of Kreo bricks?

The inspiration to build Transformers out of bricks in general came very soon, once I started building again back in 1999. The idea of having all of my favorite childhood characters built with LEGO never really left me.

So the idea to revisit my designs and try to build them with KRE-O came through the pleasure I had working with HASBRO on a freelance level for the last two years. I developed brickbuilt model concepts for their KRE-O team from 2011. So naturally I also got introduced to their brick system, which is close to what I am used to working with LEGO. There is also another fact, which made it easier to start building the characters in a lot more detail: the dedicated elements from the KRE-O setlines, like the headmolds or the hands. This was always the more frustrating part with LEGO to get the heads to a level were you don´t cheat (cut, glue, paint) too much and just get it done with simple bricks. Another important aspect is the balljoint system, which helps to get the transformation to a smooth and easy level. Articulation is very important for the robot mode too!

Then the idea of having them all in one fitting scale to each other also was something that just had to be done. For those of you who collect the TRANSFORMERS Masterpiece line, you might recognize the scale I built all the models.

- What was your biggest challenge? Which model was the hardest and why?

The biggest challenge was not the models itself. Building the collection and see it growing was and still is the biggest, most fun factor. But to keep the focus all the way through a timeline of a couple of months, while always coming back to the same theme and make it all match is something else. Hours of taking pictures and photoshopping, and shooting the video! So, the biggest challenge sometimes really is to bring it all to an end, where the time you spent bears fruit. The hardest model to build, though, was Blitzwing. He is a triplechanger (Bot/Tank/Jet), so three models in one, really.

- How long did each model take?

It is hard to say, because each model was revisited a couple of times. In the beginning of the project, around November 2013, I had plenty of KRE-O bricks to sort out and see if the colours would work and if I have the right elements to even start on the models. It was all trial and error to start off with. I think the MENASOR combiner took me around two weeks straight. I was curious to see if I could build a real combiner, which stands over 50cm tall in combined mode.

- What motivated you to create these models? And why the fascination with Transformers in particular?

The motivation behind all of the models I build is simply creativity and the need to have an output as an designer and artist. You have a vision in your head for a long time, a project, which needs to be done. In my childhood, the 80s, when TRANSFORMERS was really big, I didn't have that many TF toys, so I actually started very early rebuilding what I saw on the Saturday Morning Cartoon show.

The fascination with TRANSFORMERS is that it is so timeless and the universe is growing every minute, with all the fans around the globe who have the same passion. There are so many great characters to enjoy! I also really like the colour schemes of the designs, like Optimus' iconic red & blue truck! TRANSFORMERS is my favourite 80s theme ever!

- What advice would you give to model makers who would like to do the same?

My advice would be to first go see a doctor and make sure they're okay with the idea of anyone building with bricks for a very long period. Then you have to talk to your boss and ask them if it is okay to not be super focused at work over the next few months and if they might be into sponsoring your brick orders for company benefits. Then you need to invest into a new coffee machine and a good amound of coffee. You can sell your bed on eBay. You don´t need it anymore. Since you will be watching endless TRANSFORMERS Generation 1 episodes, make sure to get used to scratchy voices and horrible sound effects, like sampled R2D2 screams and Tie-Fighter engines. But other than that you only need a lot of patience! And bricks! But seriously, my advice to other model makers would be to spend a lot of time on the research phase and a lot of trial and error builds, to develop a nice style and transformation for the models you want to build.

- Do you plan to sell the models? And if so how much?

Since I am only a concept idea developer, I'd only hope for a company like HASBRO or TAKARA looking into what I did and come up with a similar product on for collectors. I would be always available to work on them, of course, but these models are strictly from a fan to all you fans, to make sure we celebrate the 30th Anniversary of TRANSFORMERS in the best way! So I just want to add my talent and creations to a pool of great designers and passionate fans out there!

Re: Transformers 30th Anniversary Kre-o Fan Project - Exclusive Interview with Creator Alexander Jones (1568708)
Posted by Vicalliose on April 25th, 2014 @ 2:18pm CDT
When wubs start in the middle of him talking and then don't stop for the rest of the video. Amazing.

If Hasbro/Kreo is smart (he says jokingly), they'd offer Alexander Jones an obscene amount of money for the design specs on each and every one of these magnificent creations of his. These puppies will sell!
Re: Transformers 30th Anniversary Kre-o Fan Project - Exclusive Interview with Creator Alexander Jones (1568722)
Posted by kirbenvost on April 25th, 2014 @ 3:13pm CDT
^ To be fair, he was one of the designers working on KREO. I'm sure Hasbro chose to make them non-transforming for cost reasons.

Mindmaster wrote:I'd like to see more of Starscream and the Seekers. Can barely barely make them out in the group-shot image.

In the link there's a closeup of Skywarp. Would be nice to see Starscream since it's on a black background.

These are simply amazing. I would certainly be a lot more interested in KREO sets if they looked like this. But I'm trying to cut back on collecting, not branch out, so it's probably for the best. But this is some amazing work and I applaud him for it. :applause:
Re: Transformers 30th Anniversary Kre-o Fan Project - Exclusive Interview with Creator Alexander Jones (1568742)
Posted by zodconvoy on April 25th, 2014 @ 4:13pm CDT
Holy crap, these are amazing! Now, I like the fact that you have to take the apart and reassemble them for the official ones (that's the whole point or else they'd just be blocky model kits) but those are pretty amazing. I'd get that Optimus and Soundwave in a heartbeat!

Can't wait to see the rest!

Censor that all you want, but at this point, I believe my point would be comprimised if I censored myself.

Edited by Mindmaster: Please refer to the General Forum Rules on cursing. Keep it classy, not crass-y!
Re: Transformers 30th Anniversary Kre-o Fan Project - Exclusive Interview with Creator Alexander Jones (1568860)
Posted by noctorro on April 26th, 2014 @ 3:08am CDT
I don't understand your point Mindwipe
But such passion, wow

I thought they were images of a new line of G1 classics figures with a good Megatron/Optimus.
Then I zoomed in and saw they are kreo's -_-

They look great, much talent and kudos for the builder there.
Re: Transformers 30th Anniversary Kre-o Fan Project - Exclusive Interview with Creator Alexander Jones (1568938)
Posted by triKlops on April 26th, 2014 @ 10:37am CDT
Great work on this project; the video alone was worth the buildup.
Amazing job!