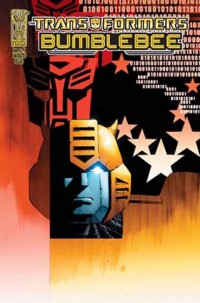 In the new lineup of IDW TRANSFORMERS comics, it's really hard to compete with THE LAST STAND OF THE WRECKERS. And then it's also just as hard to not be quite as bad as TRANSFORMERS ONGOING is. This is exactly the kind of book we have here, something in between the fun, and fantastic story of LSOTW, and the overly 'drawn' out and serious TRANSFORMERS ONGOING series. Puns intended always...

So here you have a review of the middle child of the IDW TRANSFORMERS books, TRANSFORMERS BUMBLEBEE Issue #4.

The series has been slow-paced until now. Snail slow. Its art does not lend one to openly love it, or berate it (like its two brother titles), but at least you don't need name drops, or tags everywhere to know who's who. The book's cast of characters is stuck in neutral, not really seeming to grow or change, all hiding from the government now that they have been duped.

And yet with one single issue (albeit, the last issue), we now 'RATCHET' things up a notch, so to speak, as Bumblebee deals with the situation he created in the last issue.

Bumblebee feels time running out on his newly found freedom, as Skywatch seems to get closer and closer to discovering his little secret, and thus, putting a quick end to any ideas the Autobots had of escaping this alliance that they so hastily joined.

But wait! We have a savior for Bumblebee and friends, as the creator of the control board for their badges left his spare around for the bots (and cons) to track down to his home.

Ratchet and Wheeljack communicate to Bumblebee that with the right tinkering, the next time the board is activated it can burn out all the control badges! Hooray shouted the Autobots...

Boo shouted the readers as Bumblebee used the poor, lonely daughter of the engineer to procure the control board, offering her false friendship and security for the ability to modify the board, under the false pretense of protecting her father (That statement sounds a lot like one of those, 'your mother tells you what your father always says is a lie, and your father says what your mother states is always true...OUCH!).

Anyway issue #3 left us with bad feelings all around as Bumblebee gets the job done, but at what cost to his conscience?


Enter Issue #4 (which takes place before events in TF ONGOING #5). Since nothing happened last issue something has to happen this issue. It is only a four issue mini-series, right? It's now or never!

In that sense the story in issue #4 does pay off. As I said, something does happen. Something that might make you actually want to pick this book up this month, and not ignore it. Something so spoilerific that I cannot mention it anymore specifically here, or IDW would have my head for ruining the book for everyone.

What I can tell you is expect that Skywarp is FINALLY ready to make his presence felt, as he takes the penultimate step in being prepared for Megatron's supposed return to Earth. His goal is nothing less than Autobot enslavement, and to beat Soundwave, and Starscream out for the spot of Megatron's right-hand lackey. Who knew Skywarp cared for such things? We do now.

The issue mainly focuses around Bumblebee, Skywarp, and the father and daughter that Bumblebee was using/protecting. Credits to Ratchet and Wheeljack for their straight-faced performances as uncaring robots, and to Cliffjumper for his devil-may-care scene stealing attitude. Be on board as we see humans inside a transforming TRANSFORMER. Whether they are squished or not, you'll have to see for yourself.

Stay tuned as the young, reluctant, heart-on-his-sleeve hero/leaderbot makes some drastic changes to his thinking, and perhaps, makes the ULTIMATE sacrifice!!! (Or maybe something else entirely).

**Story Note** Does anybody else cringe when they see Blaster and wonder why the control badges are even a factor with him around? Seriously, he's the communications dude. He can't 'jam' a little Earthman made signal? Blaster, Blaster, Blaster, one too many Kremzeeks jumping in and out of your chest plate, I guess. Might want to work on that jamming thing if your group is ever set free, even though they probably should not have been duped in the first place. Shenanigans all around!**

Like I said, it is way too easy for me to ruin this comic for you (and thus, the series), so I suggest a purchase if you have been paying attention to the Bumblebee series at all. This one is interesting, and exciting (sort of). Some readers will no doubt still be disappointed, as the story is still revolving around humans, and showing the Transformers as pretty helpless beings compared to the might of the human race! GO EARTH!

If you read my reviews, you know I don't break down every aspect of the book. Mostly I just pick up on story points, and comment some on overall art. These are the two aspects that are the reasons we read the comics, so to me they are the most important to comment on. I'm not a page by page guy, nor am I one who will give away the main 'GOOD' stuff. I want you to still read it for yourself, and make your own conclusions, and maybe even pop back into my review, and think to yourself, "oh that's why he said that comment that made absolutely no sense."

Thanks for reading. Pick up the book if you want, or don't (and wait for the trade), but if you've been waiting, like me, for something to happen in this series, well, you can actually say that something actually did happen in it after reading issue #4.

Check out the five page preview here, if you want to get a feeling for the book. Then head to your local shop and pick it up this WEDNESDAY, if you're interested in reading the rest before a trade is released down the road.

Written by Zandar Cannon and art by Chee, Cover by Chee and Guido Guidi

When BUMBLEBEE has a change of heart and goes back to help a little girl whom he had used to discover her father’s secrets, he finds himself pursued by the terrifying and unstoppable SKYWARP! BUMBLEBEE’s big adventure as leader of the AUTOBOTS comes to an explosive and thrilling conclusion!
Transformers: Bumblebee
32pg.
Color
$3.99 US

Dead Metal wrote:Judging by those cut off pics of Bumblebee his body changes, judging by the black stripe and the door wings and what little I can see of his chest, he changes into the more recognizable Movie Bumblebee design, grate.

And he'll somehow get his vocal processor damaged and learn to communicate by using his XM Sirius satellite radio, too!
Re: Transformers: Bumblebee #4 Reviewed - Something Happens! (1053670)
Posted by First-Aid on March 11th, 2010 @ 1:07pm CST
He HAD to get an upgrade. as the new leader of the Autobots, that makes him a permanent target for the Cons. He's not a Camaro I don't think though...looks more like a 70's muscle car of some type. And, if anything, he looks MUCH more blocky than before. I'm not fond of it in this art style. Maybe it will look better in the ongoing series. It is definitely not more movie-ish. Much the opposite. It looks ridiculous.
Re: Transformers: Bumblebee #4 Reviewed - Something Happens! (1053982)
Posted by cybercat on March 12th, 2010 @ 5:56pm CST
It was...okay.

The art was pretty hideous (that has to be the UGLIEST little girl in comic history...ever. What is wrong with her neck? A *goiter*? SRSLY!) and I presume they're Setting Something Up with Skywarp.

The major flaw here for me (beyond the eyehurt) was the Bad Guy Spills His Guts to His Enemy Syndrome. I didn't buy it when I was eight watching Scooby Doo, and I don't buy it now. And both this and Ongoing are seriously suffering from an overdose of Long Winded Seeker.

The science was pretty suck too. If you make an EMP that could destroy the badges, but suddenly it's so strong if you don't have a badge it'll destroy *you*, huh, what now?

Still, I've stuck through worse and this is maybe going somewhere and unlike the last ongoing I didn't catch any grammar errors that made me foam at the mouth with Pure RAGE, so....

I'm hoping that the other side series are better.

First-Aid wrote:He HAD to get an upgrade. as the new leader of the Autobots, that makes him a permanent target for the Cons. He's not a Camaro I don't think though...looks more like a 70's muscle car of some type. And, if anything, he looks MUCH more blocky than before. I'm not fond of it in this art style. Maybe it will look better in the ongoing series. It is definitely not more movie-ish. Much the opposite. It looks ridiculous.

And TF/New Avengers is at the bottom of the ladder ...
Re: Transformers: Bumblebee #4 Reviewed - Something Happens! (1057681)
Posted by Hairball178 on March 24th, 2010 @ 12:34pm CDT
So are we to presume that at the end of the Ironhide mini-series he will be upgraded into a black pickup truck? A Ratchet one where he becomes a green hummer? A Jazz one where he...gets torn in half?...whoops.
Click here to view additional comments about this topic at the Energon Pub Forums ...