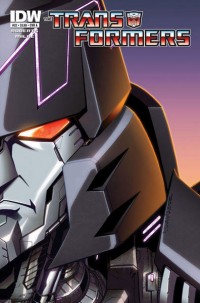 "And of course, nothing will ever be the same again!"

Transformers: Ongoing has been kicking around for the past year and a half or so. We've seen our favorite enemies revived, and our dearest characters written off. Everything will be taken to the extreme, as explained by the fine folks over at Comic Book Resources. They got a chance to interview IDW Lead Editor Andy Schmidt about Transformers: Chaos. Chaos will begin in July, and with that we've got some tidbits of information, and some sneak peeks at the artwork of Chaos. Check it all out in the interview!

"Chaos" will represent the convergence of the ongoing series with the more galactic events of "Infestation" and "Heart of Darkness" -- both written by Dan Abnett and Andy Lanning -- but readers who have only been following the core book will not have to play catch-up. "The ongoing series has been taking place for the most part on Earth, while Dan and Andy's two series are really going on in outer space. With 'Transformers' #20 and 'Heart of Darkness' #4, we've got one scene that overlaps both books, as they come out in the same month. So readers who have followed one series but not the other are perfectly fine going into the 'Chaos' event. And all is made clear. From that point, everything 'Transformers' is in the bi-weekly ongoing series from July all the way through December -- I told you big stuff is happening!"

Hehe, the thought bubbles are open to perspective:

Prowl: So, Megatron, how was your day?

Megatron: It was terrible! I lost to Prime AGAIN! I'm going to kill everything!

Prowl: Eh, well. You probably won't like what you see now, look down.