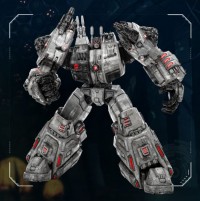 Hidden beneath the streets and amongst the buildings of Lacon lies Metroplex. One of the ancient titans of Cybertron. Metroplex is awakened by Optimus Prime to defend Cybertron as an Autobot. His size requires a vast amount of Energon, which limits the amount of time Metroplex can stay in robot mode.

Once a Seeker who served alongside Starscream, Jetfire broke rank during the early days of the war to join Optimus Prime and the Autobots. Jetfire is one of the few Autobots with flight capabilities, which makes him an important resource in the war for Cybertron.

Bruticus is the combined form of all five Combaticons. The combining technique limits Bruticus' processing power, making him a weapon Megatron just needs to point in the right direction.

As a member of the Combaticons, Brawl enjoys the destruction he causes on his own, but always looks forward to the devastation caused by uniting into Bruticus. Brawl has the shortest temper of all the Combaticons.