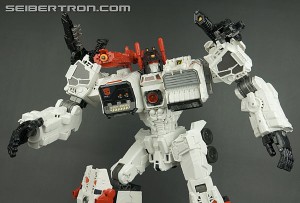 Comics and media news website Comics Alliance has produced a number of lists of Best.. of 2013 items, including comic book covers and toys. Our favourite transforming robots take their place in two of them: Best Toys of 2013 and 2013 Holiday Gift Guide! Click on the links for the full features, and take a look below at what they have to say about Generations Metroplex and Masterpiece Soundwave.

When writing up our “Best Toys of 2013” list we were torn between giving the title to Hasbro/Takara’s humongous Metroplex or the equally awesome Masterpiece Soundwave. It was a tough call, so you’ll have to forgive us for relegating Soundwave’s current ultimate figure to the Gift Guide. Think of the inclusion of Soundwave and his compatible team of transforming cassette tape robots (Laserbeak, Ravage, Rumble, Buzzsaw and Frenzy) here as a plug for the best Transformer you can buy someone this year… that’s shorter than 2 feet tall. Good luck finding one for its approximate $120 retail, however, as this SDCC 2013 debut/Toys “R” Us exclusive figure is now going for closer to $200 and higher online. One alternative is the less accessorized Takara version from Japan, or you can just bite the Energon cube and splurge for your favorite Transformer fan.

After seeing it up close at Toy Fair and going hands-on with Hasbro’s massive San Diego Comic-Con 2013 exclusive version of Metroplex, CA can assure any fans on the fence about picking up the $125 retail version that it is, indeed, as substantial as it looks. At roughly 24.5″ tall in robot mode, Metroplex appropriately towers over every other Transformer EVER. Sure, he’s not in perfect scale with Hasbro and Takara’s more pocket-sized robots in disguise, but considering a 1:1 Metroplex would probably take up a full city block, this toy is about as good as it gets. Metroplex has a sturdy build despite its proportions and transforming it from a robotic warrior to two styles of battle station/cityscape is a relative snap. If anything, applying its dozens of decals is the most strenuous part of playing with Metroplex, but the stickers are still a nice bonus even if you’re as bad as popping them on as a certain CA Senior Editor.