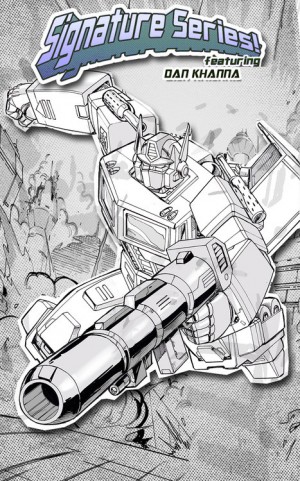 Another episode update from the DeNA Mobage mobile device game Transformers: Legends - and it's a signature series events featuring artist Dan Khanna! Check out the personalised update below, including a look at some of the artwork.

Dan Khanna here! It’s been an honor to be featured in my own TRANSFORMERS Legends Signature Series event! I’ve really enjoyed the opportunity to get a chance to draw some of my personal favorite all-time classic characters. I hope you get a kick out of my character selection, and enjoy the artwork I drew up for this event. So welcome aboard, and have fun playing this new event!

After the DECEPTICONS fail to steal the superfuel that has been given to the AUTOBOTS, their leader decides that they need their own land-based forces. After some choice thefts and modifications with Cybertronian technology, the STUNTICONS are born. But as powerful as they are, they lack the spark of life. And the only place to obtain it is Vector Sigma.

The AUTOBOTS learn of the DECEPTICONS’ plan, and realize that the newly created STUNTICONS will need to be taken to Cybertron to be given true life. In order to counter this, a group of AUTOBOTS returns to their home world to create their own sky-worthy forces.

Both groups arrive at Vector Sigma nearly simultaneously, and the AUTOBOTS and the DECEPTICONS bring life to their new allies in time for a major showdown. On one side, MOTORMASTER and the other STUNTICONS rise to life, while on the other, FIREFLIGHT, ALPHA BRAVO, and the AERIALBOTS stand tall, fighting for control of the key to Vector Sigma!

The battle starts to go badly for the DECEPTICONS, but as things look grim for them, the STUNTICONS join together to become the colossal MENASOR! With the increased firepower of their gigantic foe, the tide begins to turn against the AUTOBOTS.

Will the AERIALBOTS be able to defeat the vicious STUNTICONS? Or will MENASOR and the DECEPTICONS drive the AUTOBOTS out of Vector Sigma? Find out in TRANSFORMERS Legends - “The Key to Vector Sigma, Part 1”!

Please note that the reward card listed for the top 100 prize, MENASOR, is an Evolution card, and not a Trans-Scan card as is shown in the Join the Event screen. The top 100 prize will NOT include this version, only the Evolution version of the card. Thank you.

Re: Transformers: Legends Mobile Device Game - Dan Khanna Signature Series Episode Details (1653400)
Posted by Va'al on February 19th, 2015 @ 4:30pm CST
Via the Transformers: Legends blog, we have news and art for the new episode in the mobile device game featuring our favourite transforming robots - get out your amps, turn it up to thirteen and check out below the description for Knights of Unicron!

Even before they were the hottest band in the universe, the Knights of Unicron were still the stuff of legends. Loved by fans from Antilla to Zarak, these true metalheads shredded like no one else could. With the powerful riffs of MEGATRON and SOUNDWAVE, and the crazy vocals from OPTIMUS PRIME, nothing was going to stand in their way, not tonight!

After years of melting faces and blowing roofs off of houses, the Knights of Unicron found themselves in need of new talent and possibly a new pecking order. MEGATRON and OPTIMUS PRIME both vied for the position of frontman and lead singer, each claiming to have the touch.

Into this entered young AUTOBOT JAZZ. An up and coming musician known for his smooth grooves, AUTOBOT JAZZ was eager to prove himself in the Cybertronian music scene. He went to the Knights of Unicron audition with his friends LASERBEAK AND RATBAT in hand, to show the Knights what they could do.

Will AUTOBOT JAZZ and LASERBEAK AND RATBAT make it into the band? Will they win, if they dare? Can the group stand withstand the turmoil within their ranks? How will this look on CH1’s “Behind the Digital Audio File”? Find out on TRANSFORMERS Legends - “Knights of Unicron”!

Please be aware that with the arrival of the Ultra Legendary reward cards, like the mighty MENASOR, the difficulty of our events have increased to rise to the challenge of these and the other, more powerful cards!

Aboard a dimly lit DECEPTICON spacecraft, TARN turns to KAON and asks for a situation update. KAON reports that everything is going to plan, and that they should be close to their targets soon. The leader of the DECEPTICON Justice Division nods, and prepares to set their ship down on planet Clemency.

On the surface, BLACK SHADOW seeks refuge in the wrecked hulks left behind from a previous war. On the run for taking bribes from the AUTOBOTS to destroy a fleet of DECEPTICON War Worlds, the Phase Sixer stops and takes a breath inside a ruined ship when he runs across FLYWHEELS and the other Scavengers.

As the group finishes their conversation, a crunching noise outside alerts them to the presence of TESARUS, VOS, and the rest of the DJD. Unwilling to roll over and die, FLYWHEELS and BLACK SHADOW draw their weapons and prepare for battle.

Will BLACK SHADOW and FLYWHEELS escape the clutches of the DECEPTICON Justice Division? Or will TARN and his deadly crew eliminate their targets with extreme prejudice? Find out on TRANSFORMERS Legends - “Rules of Disengagement”!

Casey W. Coller, reporting from my underground workstation! (basement studio) I’m honored and ecstatic to be a part of the TRANSFORMERS Legends Signature Series, following in the footsteps of some amazing artists! I had the chance to choose some of my favorite Transformers to include (and it was hard to narrow it down), and I hope you enjoy playing the game! Good luck and have fun!

“til all are one”-Casey W. Coller

Re: Transformers: Legends Mobile Device Game - Dan Khanna Signature Series Episode Details (1663272)
Posted by Henry921 on March 16th, 2015 @ 5:59am CDT
They've finally cut out the middle man and just offered a fully MTM Scorponok for 5000 cybercash ($49.99 US). The sad part is this is an improvement over the usual random chance we had before when using the premium space bridge.

Back on Earth, the DECEPTICONS discover that the key to Vector Sigma is able to transmute whatever it touches into metal. Knowing that they have this, and the might of MENASOR, the DECEPTICONS decide that they will turn the Earth into a new Cybertron.

Teletraan 1 detects the energy of the key being used to convert parts of the area around a major northwestern city into metal, and alerts the AUTOBOTS. The AERIALBOTS join their new allies and head there, intent on stopping the DECEPTICONS from destroying the Earth’s environment with the key.

The STUNTICONS, upon seeing their hated rivals among their newly arrived enemies, charge towards them, intent on turning them into scrap. An instant later, a mighty battle erupts around them and the AERIALBOTS, leaving members of both factions out of commission.

As the fight rages on, MOTORMASTER, DEAD END, and the other STUNTICONS combine to become MENASOR. With a mighty roar, he lumbers onto the battlefield, knocking combatants flying as he storms towards the AERIALBOTS. Seeing the giant approach, they merge to form SUPERION, surprising their rival. Without a moment’s hesitation, they take MENASOR on hand-to-hand.

Can SUPERION turn the tide back against the DECEPTICONS? Or will MENASOR finish off the AUTOBOTS’ newest warriors? Find out on TRANSFORMERS Legends - “Key to Vector Sigma, Part 2”!

Cobotron wrote:That is an AWESOME painting. I would frame that, and hang it in my house.

Agree great artwork except they made that car in the background too large.
Re: Transformers: Legends Mobile Device Game - Dan Khanna Signature Series Episode Details (1666679)
Posted by Va'al on March 25th, 2015 @ 5:18am CDT
Fellow Seibertron.com member Starsaber468 has spotted a new update on the Transformers: Legends blog, detailing the new event for the mobile game, including some new planet-tastic artwork. Check it all out below, and feast your eyes on the cosmic brothers Primus and Unicron!

TRANSFORMERS Legends - “Battle of the Brothers” has begun!

The AUTOBOTS and DECEPTICONS are locked in fierce battle over an experimental space bridge designed by JETFIRE. GALVATRON, intent on using it to transport weapons of mass destruction straight into enemy territory, orders his forces to use any means to secure it.

A stray shot from someone’s weapon strikes the space bridge, causing it to overload and explode. RODIMUS, JETFIRE, and GALVATRON and their teams are blown backwards through time, to before the creation of Cybertron.

There they discover the two brothers, PRIMUS and UNICRON, locked in titanic combat. The universe trembles with each blow, until finally the both withdraw, summoning forces to their sides to aid in the battle.

GALVATRON, in his madness, decides to ally his DECEPTICONS with UNICRON, ignoring the fact that the destruction of PRIMUS will spell his end as well. Meanwhile, RODIMUS, JETFIRE and the AUTOBOTS, realizing the stakes, throw all of their strength behind the creator of the Cybertronians.

Will PRIMUS prevail over his brother, the Chaos Bringer? Or will UNICRON finish the creator and erase the AUTOBOTS and DECEPTICONS from existence? Find out in TRANSFORMERS Legends - “Battle of the Brothers”!

UPDATE - All players in this Team Battle Episode have a chance of receiving a reward of 40 Battle Cubes from any of the bosses encountered. This is on top of the normal Boss payouts.

Starting in April we will be re-running classic TRANSFORMERS Legends episodes. All character and weapon card stats featured in these classic episodes have been updated.

Since there have been numerous changes over the years to TRANSFORMERS Legends, you may notice that some of the events have different reward payouts. This is intentional; we did not want to put in cards that were not there during the Episodes original launch dates.

We hope you enjoy the Best of TRANSFORMERS Legends, starting with “Dark Cybertron”!

We are currently experience technical issues deploying builds to iOS. Because of this you will be receiving an ‘ui_eventmanifestfailure’ error when launching the game.

This episode is currently in pre-registration so this will not effect forming teams when the event starts tomorrow.

We are working hard to resolve the issue and hope to have it fixed as soon as possible.