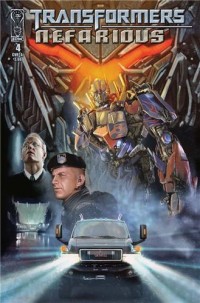 Simon Furman's blog has updated with some intriguing information about Nefarious #4, due to be released this Wednesday.

Simon Furman wrote:A sort of combined deal this time around, a script (w)rap for Transformers Nefarious #4 and also a pre-release teaser for the same, as it hits stores this coming week (June 16th in the US, 17th in the UK). Last issue saw Soundwave slip through the Autobots’ collective fingers and this issue he’s decided enough is enough. The human organization responsible for both the resurrection/usurping of Ravage and the manipulations that landed Soundwave in trouble in the first place is going down — hard! But the Initiative has tricks up its sleeve that, once again, even Soundwave hasn’t seen coming. And at last we learn some of the how and why about this mysterious and far-reaching organization (which seems to have an uncanny grasp of Cybertronian technology) and its coldly calculating director, Carter Newell. Just how long does his relationship with the robots in disguise go back? What traumatic event eventually gave rise to the Initiative? The answers will surprise you. And, meanwhile, director of national security Theodore Galloway is well and truly in the firing line — hunted by none other than Ransack! Things are looking distinctly terminal in that direction! Nefarious #4 is out in the next few days, with story by me art by the incredible Carlos Magno. Don’t miss it! The post can be seen at Simon Furman's blog here.

For the latest in Transfomers comic news, stick with Seibertron.com!