Transformers Power of the Primes Commercial 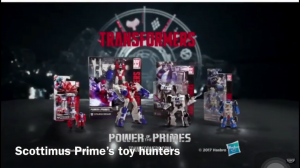 Our regular source of news Scottimus Prime Toy Hunter has sent our way a notification of a new TV commercial for Hasbro's Transformers Power of the Primes line! With only 15 seconds running time in total, the clip - which has been embedded below for your viewing pleasure - we have an animation of Jazz and Starscream racing against each other to reach Prime Master Micronus, and his enhancing powers.

Check out the clip, and let us know what you think of the new toyline so far! Any pleasant surprises, disappointments, expectations from the first wave, now almost entirely spotted at general retail, with wave 2 revealed and confirmed (see here) - join the discussion in the Energon Pub.

Posted 1 day ago
News Categories: Toy News, Movie Related News, Comic Book News, Cartoon News, Site News, Rumors, Event News, Digital Media News, Collectables, Game News, Sponsor News, Site Articles, Store News, Company News, People News, Press Releases, Sightings, Reviews, Unlicensed Products News, Auctions, Transtopia, Interviews, Knock Offs, Collector's Club News, Editorials, Heavy Metal War, Podcast, Contests, Book News, Top Lists
Click here to post your comment about this news story!
Re: Transformers Power of the Primes Commercial (1927677)
Posted by Cybertronius Primus on December 22nd, 2017 @ 8:51am CST
Wave one power of the primes legions and masters are at forbidden planet stores in the UK.
Re: Transformers Power of the Primes Commercial (1927681)
Posted by o.supreme on December 22nd, 2017 @ 9:25am CST
So I got my Ramhorn and Prime Masters from HTS yesterday. Not only did I not hit the lottery of a double PM, But with Cloudburst/Micronus, there was no instruction sheet. Not that those are needed mind you, I just like to collect the ones I get, and its just the principal of getting what you paid for.

Also what's the deal with all the extra tape around the packaging of each figure from HTS??...

(we need a Jerry Seinfeld font)

I love the Prime Masters -- I originally only got Cloudburst & Metalhawk, since I didn't have their G1 incarnations. But when I saw Skullgrin at TRU, I liked his Liege Maximo "face" and bought him, too.
IMG_9449.JPG
IMG_9457.JPG
The Skullgrins look great together.
IMG_9459.JPG
Re: Transformers Power of the Primes Commercial (1927697)
Posted by Sunburnninja on December 22nd, 2017 @ 11:03am CST
Dang, I didnt even think they would make a commercial, it's been so long since the last time there was one.

Re: Transformers Power of the Primes Commercial (1927698)
Posted by Dr. Caelus on December 22nd, 2017 @ 11:08am CST
I'm looking forward to seeing the Decoy armor/weapons attached to some combiners. I'm planning:

Totally read that in his voice

Pretty happy with him. Put the combiner boots on his forearms and attached the fists to the boots - looks pretty cool that way.

Edit: It's also pretty entertaining that he can store a Titanmaster/Primemaster/Enigma in his Dino mouth.
Re: Transformers Power of the Primes Commercial (1927746)
Posted by Bronzewolf on December 22nd, 2017 @ 5:17pm CST
We have some big news coming out of our friends up north! We have confirmation that the Power of the Primes Leader Class figures have been spotted at a Toys R Us In Broussard, Quebec! While all the other size classes have been spotted, the leader class figures have been notoriously hard to find all around the world. We have some photographic proof, as Well, of the wave 1 assortment (Optimus Prime and Rodimus Prime) on store shelves, from Seibertron reader Daniel on Facebook. Daniel also spotted the wave 1 Prime Masters and Voyager Starscream and Grimlock at the same Toys R Us store! Get hunting, Canadian fans, and let us know down below what you find! 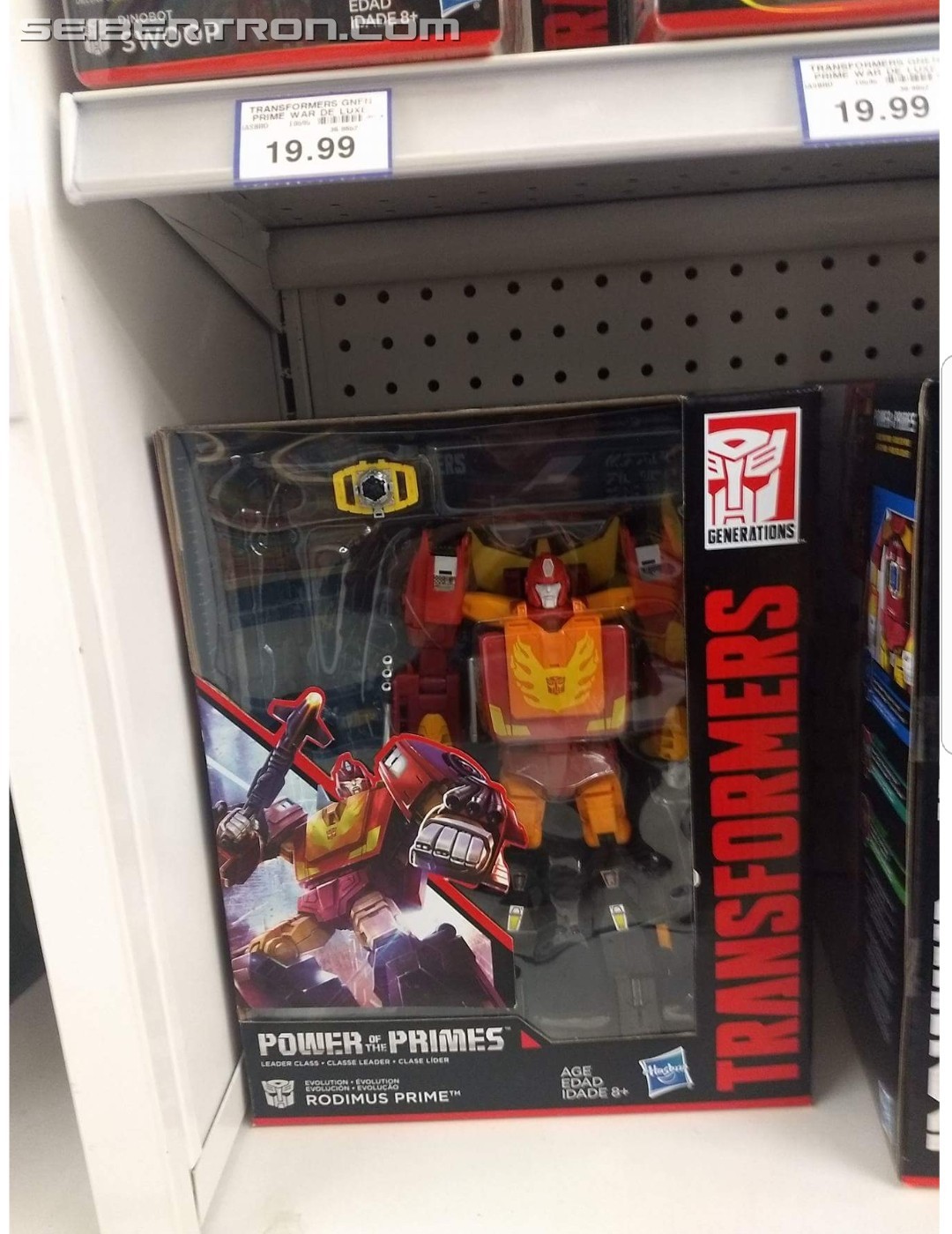 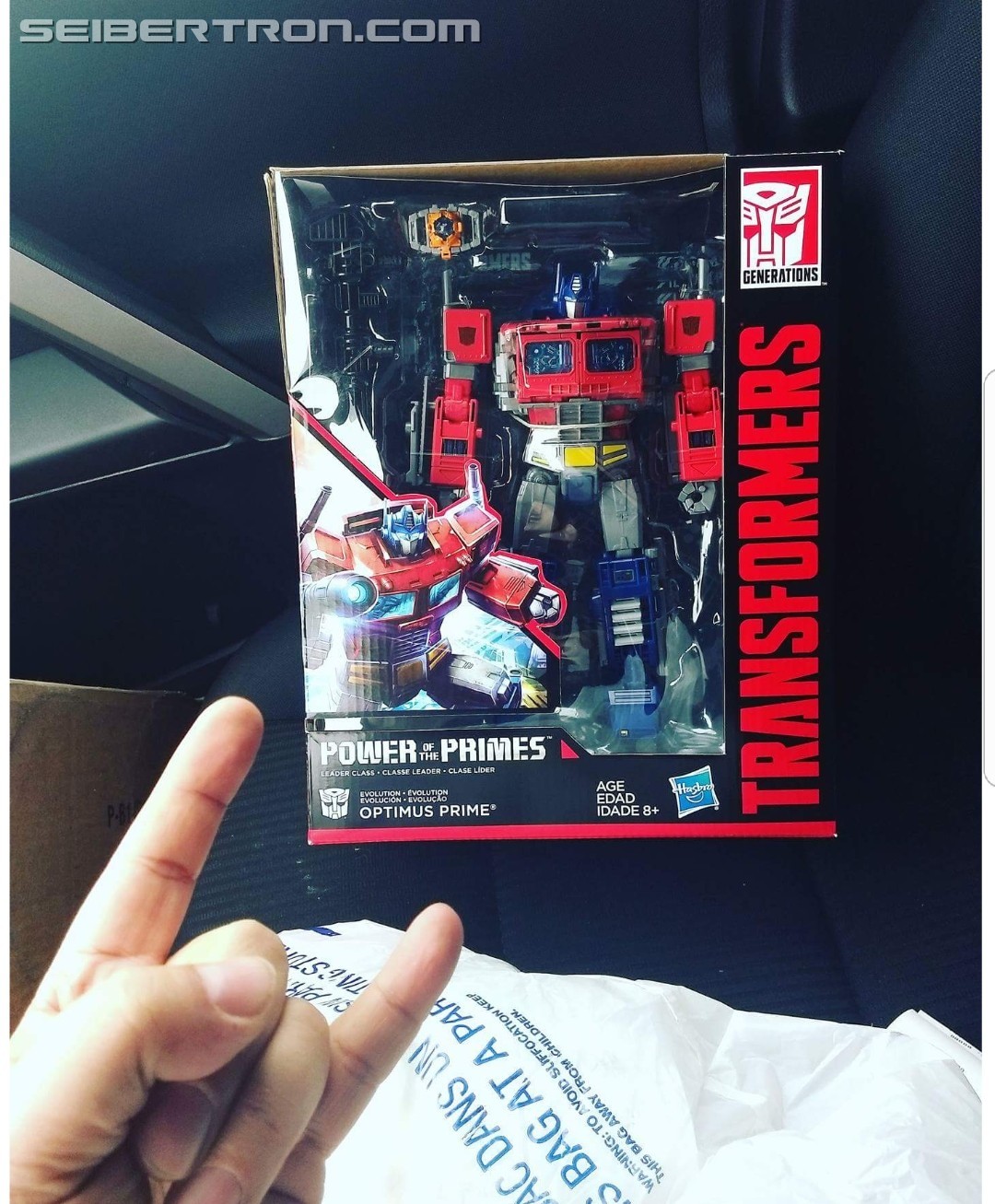 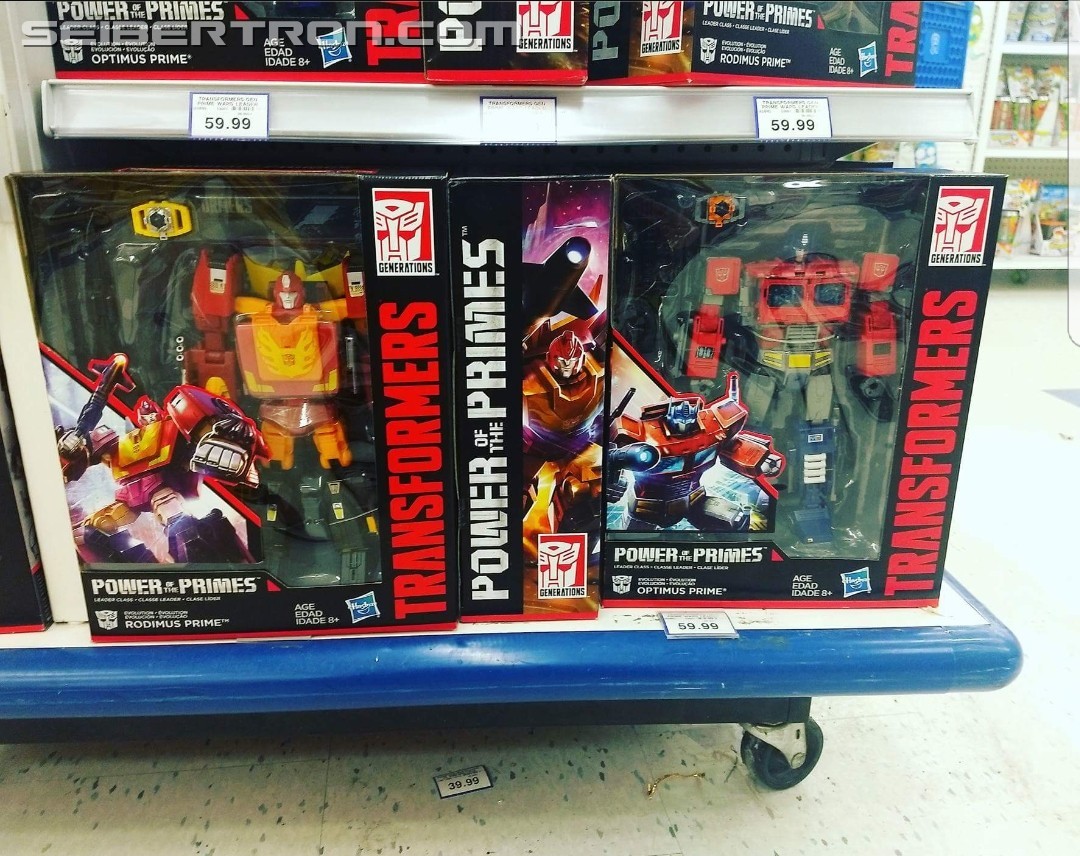 WANT!!!!
Re: Transformers Power of the Primes Commercial (1927751)
Posted by Regimus Prime on December 22nd, 2017 @ 6:03pm CST
Can't wait to get my hands on these two. That Rodimus looked awesom on display this year at SDCC.

Cheetron wrote:I'd be happy to just see one power of the primes figure at retail. Especially Prime

Can no one photoshop them out?

I can, but I don't know what you're expecting to see.

The wave 2 figures in package, or is that not how Photoshop works?
Re: Transformers Power of the Primes Commercial (1927905)
Posted by bacem on December 23rd, 2017 @ 8:53pm CST
There's now an english review for optimus and rodimus, by chefatron.

Re: Transformers Power of the Primes Commercial (1927916)
Posted by Skritz on December 23rd, 2017 @ 9:46pm CST
My local TRU finally had some PotP stuff and only Voyagers. Considering this was the size class there was a massive sale of last week I can only come to the conclusion that the rest of the first wave is collecting dust until these shelves are cleared of all the other stuff. And considering how much of it is self-warming RiD 2015 crap and too many TR deluxes and leaders?

In any case, got my hands on the already-infamous Voyager Starscream. He's not as horrible as I expected him to be, even if its true that his stickers are pretty damn fugly. Maybe its because I've never owned a Starscream figure and am just glad I got one in a size class that scale decently with my Megatron (the TR one). Voyager and deluxes, I've come to realize, really are my preferred size classes for Generations as I find it weird when some characters are blatantly larger than characters they shouldn't be. Leader works fine for huge bots like Overlord, Sixshot or Ultra Magnus but personally I find the Deluxe and Voyager to be my sweet spot both in terms of budget and shelf size.

So, back to Starscream: people say he's hideous and all wrong and an abomination. But is he? Well right now I got him in robot mode and he's not exactly the greatest modern Starscream by any stretch of the imagination. Sadly I've never got my hands on the 'Classics Seekers' mold so this Starscream will have to do. If there ever was a figure which I bought and went 'this will need third party stickers' this will be the one. So final verdict? He's not great and will need some fixing but is he atrocious? No, not really. Plus you can give him a literal dickhead, which is funny in a truly immature way.