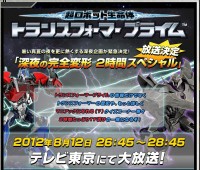 Thanks to Seibertron member Sabrblade, we're now aware of a fan translation of a TakaraTomy advertisement for a late night, 2 hour Transformers Prime special that's set to air in Japan on August 12th. From 2:45-4:45 am! The special will consist of a look back at all of the episodes and story, so far. It also has a section dedicated to showing the differences between the American and Japanese versions of Airachnid's introduction episode, Predatory, along with director Yoshikazu Iwanami's commentary on the episode.

As some of you may know, Airachnid's character is partially changed in the Japanese dub, making her statements and antics somewhat questionable for certain audiences. For those who don't know, our Airachnid is cold, intelligent and a murderer. Japan's Airachnid is "boy crazy", kooky, but still dangerous, among other things.

The special will be hosted by the voice actors for Miko, Sierra and the Vehicons, with comments from the cast, plus a special segment retrospective dealing with Transformers series of the past.

And here I thought her lame toy was the worst injustice her character would suffer.

Bumblevivisector wrote:So, how much of Prime has aired in Japan so far? All of season 1?