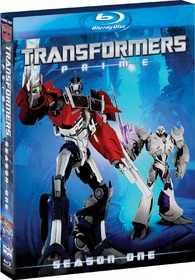 Transformers Prime: Season One's 1080p transfer isn't all that consistently pretty. Certainly, there are moments when the animation sparkles, but aside from its flatness, there are some technical bugaboos that drag it down considerably. First, the image is greatly hindered by what is oftentimes intense banding. Huge chunks of the image often suffer through terrible bouts, with entire backgrounds sometimes reduced to large masses of bands of poor color transitions. Unfortunately, many a line are jagged, and aliasing appears with some frequency, too. As noted, the animation is naturally flat and often looks to have a plastic-like texture to it. There's no real flow on anything but the Transformers themselves; human hair and clothes offer no real movement or textures. Such elements are very much flat and stiff, but that's inherent to the original elements, not a fault of the Blu-ray transfer. On the flip side, those Transformers can look quite good in close-ups; the digital artists have taken the time to create some fairly complex elements within eyes, faces, various exposed gears, and the like. Their metallic exteriors are scratched, dented, dirty, and generally well-abused, but that's mostly the extent of fine detailing. Colors, likewise, are very flat and lack much range outside of basic shades. The yellows, reds, greens, whites, and blues that make up the Autobots are bright but monochromatic. The Decepticons are a bit colder, favoring rather flat shades of purple and gray. It's all relatively simple, but it's that intense banding, frequent jaggies, and occasional aliasing that really hurt this one. The banding is nothing short of an eyesore, so audiences sensitive to that might want to rent before committing to a purchase.

acchillyaout wrote:...Having Michael Bay add some insight would have provide this series a huge lift...

I hope you equipped your flame shields, because you're gonna catch A LOT of flak for that statement.

I'll respectfully disagree, though. And leave it at that.

Re: Transformers Prime: Season One Blu-ray Review and 2 new promo videos (1347657)
Posted by Bouncy X on February 15th, 2012 @ 11:27am CST
i found this on my own and read it last night. gotta say i dont get his complaints about the animation. its gorgeous and awesome animation for a tv series. there are a lot of CGI kids shows out there and many look exactly like what they are, cheaply and quickly produced. but this show looks great and you can tell time and effort is taken.

this and Clone Wars are just beautifuly animated tv series. of course they don't have the finesse of a theatrical release, it be silly and even stupid to expect that at all. all that said i am surprised to see his comments regarding some of the video issues. CGI animation is usually pretty flawless on blu-ray, regardless of the actual quality of the animation...the picture is usually always top notch. and it seems that behind the scenes thing is just the segment from the hasbro special that featured this and G.I. Joe before the shows started. was hoping they might have made something new and longer for this release.

First off, "Banding" is a color issue that can be caused by either poor rendering or poor display. A good example would be if you are looking at a shaded sphere. The actual image should be a smooth, continuous gradient, without any sign of transition as the grayscale changes around the surface of the sphere. If the sphere was poorly rendered or you have a display (monitor or TV) that has poor color rendering (either by design or improperly calibrated) you will see what look like stripes (or bands) of colors around the sphere. The grayscale is NOT transitioning smoothly, creating hard transition points that look like lines. I haven't seen much of this in Prime, but I also wasn't doing an in-depth review of the video quality. I've seen more with improper light rendering or lower quality renders on background objects than banding.

While I agree there are plenty of rendering errors to be found in Prime, you have to do an apples-to-apples comparison. I agree with the above posters that when you look at other CGI TV shows, Prime is top-notch. However, this reviewer, being a Blu-Ray reviewer, is probably comparing more to the likes of Pixar, which is in a whole different ball park. It sounds like the Blu-Ray transfer should be pretty faithful to the source material, and I am looking to pick this up.