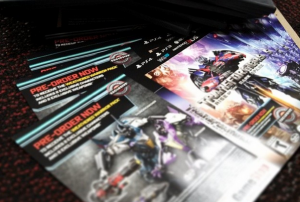 Courtesy of Instagram user dystamine have details on the GameStop Weathered Warriors exclusive for the upcoming Transformers: Rise of the Dark Spark video game first brought to our attention by our own scalan15. This exclusive content pack will allow access to Fall of Cybertron Skywarp and Thundercracker, plus the Glass Gas cannon and Soundwave's Electro Bolter.

Homerjay14522 wrote:Am I the only one Hoping we get a G1 Megs this time around?

Preorder Transformers: Rise of the Dark Spark and receive the GameStop Exclusive Weathered Warrior Pack!
The Weathered Warrior Pack includes two awesome characters - THUNDERCRACKER and SKYWARP - both fearsome masters of combat in service of the DECEPTICONS. The collection also delivers two powerful new weapons: the distortion field-generating Glass Gas Cannon and the long-range, kinetic projectile-spitting Electro Bolter. These potent weapons will also be available for players' use in the story-based Campaign and Escalation modes once they are unlocked.

Online Customers: Code will be emailed within 2 business days after your order ships.

Store / In-Store Pickup Customers: Code will be printed on your receipt at time of purchase.

They both appear to have new shoulder designs...for some reason
Re: Transformers: Rise of the Dark Spark GameStop Exclusive "Weathered Warriors" Content Pack (1571055)
Posted by Sabrblade on May 3rd, 2014 @ 8:17am CDT

Skywarp's forearms and hands are now purple instead of black.
Re: Transformers: Rise of the Dark Spark GameStop Exclusive "Weathered Warriors" Content Pack (1571319)
Posted by Primeultimus on May 4th, 2014 @ 7:43pm CDT
Rise of the Dark Spark Release Date June 24th coming to Xbox One, Xbox 360, PS4, PS3, Wii U and 3DS

Skywarp's forearms and hands are now purple instead of black.

Gotta get that toy accuracy.

Playable in Campaign, too... I wonder how that will work.
Re: Transformers: Rise of the Dark Spark GameStop Exclusive "Weathered Warriors" Content Pack (1571370)
Posted by Sabrblade on May 5th, 2014 @ 7:38am CDT

Skywarp's forearms and hands are now purple instead of black.

Gotta get that toy accuracy. Transformers: Rise of the Dark Spark

Even as Transformers fans cross their fingers that Michael Bay’s next movie iteration turns out well, Activision is moving forward with a new video game for the robots in disguise. For a few years now, we’ve become accustom to new Transformers game iterations that were either part of the War for Cybertron arc, or other (usually less compelling) installments connected to the movie universe. New developer Edge of Reality is breaking that trend, with an entry that attempts to link the two fictions together.

“The player controls Transformers characters on both Earth and Cybertron,” says producer Andy Owen. “Each character looks different and true to lore in each environment. The worlds are connected by the mysterious, ancient relic known as the Dark Spark, which acts as a portal of sorts to flash the story back and forth between them.” In this new twist on the established fiction, the Dark Spark in an antithesis to the Matrix of Leadership commonly carried by Optimus Prime. “It allows anyone who wields it to bend the fabric of the universe to their will,” says Owen – helping to explain how these two seemingly disparate timelines connect up in the story.

In the movie universe, the story is clearly meant to be set around or after the events of the upcoming Age of Extinction movie. Meanwhile, back on the robots’ home planet, Owen explains that this new game occurs before the resolution of Fall of Cybertron – which concludes with the majority of the cast departing the planet. “Fans really love Cybertron, and we really love the environments,” says Owen. “We thought there were still interesting stories that could be told within the context of the war and with the great cast of characters, so we’ve kept it anchored before the Ark launches.”

Gameplay hews closely to the style established in Fall of Cybertron, presenting a discrete single-player story focused on third-person action and shooting, with regular shifts between a multitude of characters. Rise of the Dark Spark also brings the return of the cooperative Escalation mode, in which a team of robots defends against increasingly challenging waves of attackers. Between the two modes, Rise of the Dark Spark includes over 40 playable characters, although it’s fair to assume that at least some of those characters are re-skins of established heroes and villains in the two different universes.

While it sounds like Edge of Reality is maintaining many of the central gameplay elements that made High Moon Studios’ games so much fun, the new studio is also exploring a few innovations. “One of the best [new features] is the unified leveling system, where you can play the game in either Campaign or Escalation mode, and all of your levels and unlocks carry over,” says Owen. XP is earned through defeating foes, but also by completing distinctions and challenges. “Distinctions are small combat-related feats you can complete, and challenges are more level-based,” says Owen. In addition to providing increased XP awards, these tasks also unlock gear boxes that include new items, characters, weapons, and weapon upgrades.

Escalation mode also includes some new twists, such as offensive and defensive installations, as well as a new addition called power foes, in which your cooperative team must occasionally contend with named boss encounters. “You might be fighting a wave of enemies, and all of a sudden you’re facing off versus Megatron himself,” says Owen. Rise of the Dark Spark also includes a new gameplay-altering feature called hacks, which in practice sound like the skulls of the Halo games, letting you set universal behaviors like higher enemy health or exploding robot upon death.

Given the positive reaction I’ve had to the Cybertron games, and the questionable storytelling that characterizes the movie fiction, I’m wary of this move to mix the two together. Even so, I’m hopeful that the best story ideas and gameplay dynamics can rise to the top, even as we all continue to wait and hope for a true sequel to High Moon’s Fall of Cybertron.
» Matt Miller

Details are scarce, but Activision has also brought on developer WayForward to create a separate 3DS game that bears the same title – a tactical RPG starring the Autobots and Decepticons. “This version features a compelling twist allowing fans to play through a tactical strategy game,” says produce Andy Owen. “Players will plot their next move on detailed strategic maps and then engage in epic one-on-one 3D battle sequences featuring over 50 Transformers characters.”

Rodimus Prime wrote:So basically they're putting 2 games together, and cutting the gameplay of each in half. I was interested in this, but considering the movie games aren't nearly to the level of the Cybertron games, I think this won't be as fun. Also, I'm not sure how the Cybertron story will fit in, and if it will mess with the Fall of Cybertron story at all.

Seems like the previous belief of this game's WFC/FOC parts being set in between WFC and FOC was a misinterpretation of this article's info, as it'll really take place during FOC. I'd wager it'd best fit after Chapter IX (Megatron's revival) but before the end of Chapter XII (when Grimlock blows the Space Bridge open).
Re: Transformers: Rise of the Dark Spark GameStop Exclusive "Weathered Warriors" Content Pack (1574598)
Posted by El Duque on May 16th, 2014 @ 8:55am CDT
The official TransformersGame YouTube channel has uploaded a new trailer for the upcoming Transformers: Rise of the Dark Spark. The game will release next month on the 24th for all major gaming consoles. Check out the trailer embedded below:

Will you be ready when two worlds collide? Check out the exclusive new trailer for TRANSFORMERS: RISE OF THE DARK SPARK available June 24 for Xbox One, Xbox 360, PS4, PS3, Wii U, 3DS, and PC.

Re: Transformers: Rise of the Dark Spark GameStop Exclusive "Weathered Warriors" Content Pack (1574605)
Posted by Sabrblade on May 16th, 2014 @ 9:09am CDT
I see a few generic dudes and a big guy. I'm guessing these are game-only opponents.

Still waiting on more info for the 3DS WayForward version.
Click here to view additional comments about this topic at the Energon Pub Forums ...