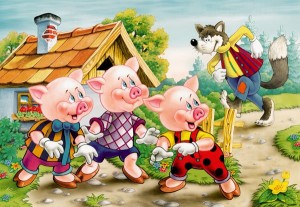 As previously reported back in early June here TakaraTomy has been making mini movies poking fun at the old fable the Three Little Pigs with Optimus Prime, Bumblebee, and Ratchet in their Studio Series molds fending off the villainy of Zoids Wild series Death Rex aka the big bad wolf!

Well we just learned they posted their latest and final episode to their Twitter. Enjoy the embedded prior episodes to get caught up and let us know what you think of this fun little play of pigs in the forum now that it's concluded.


And finally to get you all caught up, Episode 4:


As always stay tuned to Seibertron for the ultimate in Transformers news!


in the year 20XX, three Transformers (Optimus Prime, Ratchet, and Bumblebee) come to a new land to live there, and each decide to build a house for them all to live in.

Bumblebee decides to build a house made of straw because it is light and easy to work with, completing his work in less than a day. Optimus, however, is worried that the straw house may not be able to withstand an attack should one occur, and Ratchet thus decides to build a more durable house. Bumblebee, however, does not take their concerns to heart, basically telling them both not to worry so much.

Nonetheless, Ratchet proceeds to build a stronger house out of wood and made with more care, which takes him two days to complete. Optimus is more impressed with this house, but still can't shake his anxiety.

So, Optimus takes it upon himself to build an even stronger house, this time one made with bricks. Unlike the others, it takes Optimus a whole five days to complete the brick house. And it turns out to be a good thing that he finished when he did, too, because, all of a sudden, the ground begins to shake.

"The footsteps of a sinister sound echoed in the distance."

Yesterday, the three Transformers (Ratchet, Optimus Prime, and Bumblebee) built their respective houses in the land that they had come to and in which they decided to live. But, there was a certain fear about it...

Now, animals have gathered in the land where the three Transformers have decided to live, and peace continued for days. Until one day, when the ground shook and scared the animals away. The three Transformers each fled into their respective houses for safety. Two members of the Death Metal Empire, Death Rex and Gilraptor, arrive in the land with the intent of taking it for themselves.

The two first approach Bumblebee's house. The two demand Bumblebee to open the door, but he refuses and provokes them into attacking his house. Gilraptor responds in kind with his special move, Display Star, which he uses to slice and tear Bumblebee's house to shreds.

Bumblebee manages to escape to Ratchet's house, who lets him inside and shuts the door as Death Rex and Gilraptor make their approach...

The three Transformers had built houses for themselves to live in, but the straw house Bumblebee had built was attacked by the Death Metal Empire. Bumblebee fled from his destroyed home to that of Ratchet, which was built of stronger wood.

The Death Metal Empire approach Ratchet's wooden house and demand they be let in. Ratchet refuses and dares them into attacking his house. Angered, Gilraptor powers up and strikes the house, but is knocked back when he finds the house to be much more durable than expected.

Ratchet and Bumblebee are relieved, but Death Rex steps up to take care of this himself. He powers up his special move, "Death Blast", and rams his weapon into the house's wall, collapsing the structure upon impact. Ratchet and Bumblebee fall to the ground and make haste for Optimus Prime's brick house.

Optimus lets the two inside and shuts the door behind them. Frightened, Bumblebee and Ratchet alert Optimus of how the Death Metal Empire has destroyed both of their houses. Optimus says he has an idea, while Death Rex and Gilraptor make their approach...

The three Transformers have had their straw house and wooden house both destroyed by the Death Metal Empire, and now the final battle will commence at the brick house.

Death Rex and Gilraptor arrive at the brick house and threaten to destroy it if its occupants don't let them in. Optimus, however, is not afraid and insists that his house is too strong for them to destroy.

Angered, Death Rex orders Gilraptor to attack the house with him together in unison. They both power up their respective attacks, "Death Blast" and "Display Star", but when the two strike the house, they are knocked back by its resilience.

The two refuse to give up and Optimus goads them into attacking some more, but the brick house will not break. Finally, the two Death Metal Empire members fall over in exhaustion. Optimus sees this as their chance, but Ratchet and Bumblebee are confused as to why Optimus is not afraid.

When Optimus runs outside, he is stopped when he sees that the animals of the land have returned. He is also surprised to see the animals joined by members of groups called Freedom and Supreme.

Death Rex and Gilraptor get up and also spot the members of Freedom and Supreme. Wanting nothing to do with either of those groups, the two turn tail and leave. Bumblebee and Ratchet rejoice in the Death Metal Empire's retreat.

Stargrave wrote:Sabr you’re the best thank you!! Can you let me know where you found and how you translated those? See I would have loved to have added those to the story. I’m always learning.

I wrote them myself. I turned on the videos' Closed Captions, then switched the auto-translate to English. From there, I wrote up the summaries based on both my best interpretation of the hilariously bad auto-translation and my own limited knowledge of Japanese.
Re: Transformers Studio Series Optimus Prime Bumblebee and Ratchet Star in The Three Little Porkabots (2028849)
Posted by Stargrave on July 14th, 2019 @ 6:38pm CDT
Oh so, you know, no major deal then

Re: Transformers Studio Series Optimus Prime Bumblebee and Ratchet Star in The Three Little Porkabots (2028877)
Posted by D-Maximal_Primal on July 14th, 2019 @ 8:32pm CDT
with SDCC this week, here are my SS hopes:

Devastator shown off in his totality. I am ready to see the other half of him. He needs to be the highlight!

Given the pricepoint and the "within this year" release date, I'm guessing it's the Japanese release of MPM-9 Jazz.
Re: Transformers Studio Series Optimus Prime Bumblebee and Ratchet Star in The Three Little Porkabots (2029939)
Posted by ZeroWolf on July 18th, 2019 @ 6:25am CDT

Given the pricepoint and the "within this year" release date, I'm guessing it's the Japanese release of MPM-9 Jazz.

Looking again it does clearly say mpm 9 so... Mystery solved

Given the pricepoint and the "within this year" release date, I'm guessing it's the Japanese release of MPM-9 Jazz.

Looking again it does clearly say mpm 9 so... Mystery solved

Soundwave with Laserbeak can only mean the DOTM design, which is great news.

Mixmaster is awesome, and I wonder if they'll make him a quadtruplechanger (cement truck, robot, cannon, and Devy head)
Re: Transformers Studio Series Optimus Prime Bumblebee and Ratchet Star in The Three Little Porkabots (2029944)
Posted by ZeroWolf on July 18th, 2019 @ 7:27am CDT
Greetings Seibertronians! Fans of the Transformers Studio Series line have I got some interesting news for you! Fellow Seibertron user, Cyberpath, has pointed us in the direction to regular news source Loopaza's Facebook Account, has released a screenshot of newlistings.

Of the five, only one MPM 09 Autobot Jazz isn't Studio Series. The others are three Deluxe Classes and one Voyager Class, which is Constructicon Mixmaster. The three Deluxes are completely unknown, but one is another Bumblebee, though unknown what Alt it will have. The other two, is Soundwave and Lazerbeak. Lazerbeaks incursion probably labels this as the Dark of the Moon version.

More interesting though is the listing for the Arcee Triplets from Revenge of the Fallen.

These appear to be sold as one set under the deluxe price which means they'll be among the smallest transformers in the line. In the movie these were supposed to be able to combine but the feature was cut from the film and two of the three sisters were redecos of each other in the Revenge of the Fallen toyline, rendering the ability incomplete. Time will tell if these releases are able to combine or not.

That was a Willy's keep not a Humvee
Re: Transformers Studio Series Optimus Prime Bumblebee and Ratchet Star in The Three Little Porkabots (2029949)
Posted by william-james88 on July 18th, 2019 @ 8:10am CDT

I am pretty sure it will be the 2007 Camaro. I cant believe it took this long for that toy to appear in a line dedicated to the history of the TF movies.
Re: Transformers Studio Series Optimus Prime Bumblebee and Ratchet Star in The Three Little Porkabots (2029955)
Posted by UnderYourCloset on July 18th, 2019 @ 9:33am CDT

That was a Willy's keep not a Humvee

I'm not an expert on the vehicles, I just think they look cool

I’m a huge sucker for mini-figs...