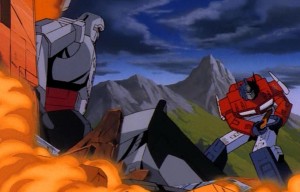 Los Angeles is not the only city to get a Transformers: The Movie (1986) screening in the near future. Thanks to fellow Seibertron.com fan Todd Matthy, we have news of a screening taking place at The Alamo Drafthouse in Yonkers, NY, and tickets can be purchased here!

Director Nelson Shin
Year 1986
Starring Peter Cullen, Eric Idle, Orson Welles, Judd Nelson, Leonard Nimoy
Rating PG
Run Time 84min
Age Policy 18 and up; Children 6 and up will be allowed only with a parent guardian. No children under the age of 6 will be allowed.

Transformers! More than meets the eye.

Beyond good, beyond evil, beyond your wildest imagination, in the year 2005, a war rages between the Autobots and Decepticons. The Autobots have successfully defended Earth from Megatron and his evil band of Decepticons, but they have lost the war at home on Cybertron. Heroes will rise, and evil will be reborn as a new threat in the form of the planet annihilator, Unicron, who sets his sights on Earth and the Autobot Matrix of Leadership.

Hold on tight because the most incredible rock ‘n’ roll adventure is here. It’s the ultimate battle between Autobots and Decepticons as the final confrontation between Optimus Prime and Megatron brings the battle between good and evil to a whole new level. This movie is pure robot-fighting destruction between Dinobots, Junkions, Sharkticons, and robots THE SIZE OF PLANETS. Featuring the voices of Orson Welles, Judd Nelson, Peter Cullen, Leonard Nimoy, and Eric Idle and set to a screaming aural backdrop of Stan Bush and ‘Weird Al’ Yancovic, this movie will obliterate your eyes and ears and leave you crying for more. TRANSFORMERS!!!! (Greg MacLennan)