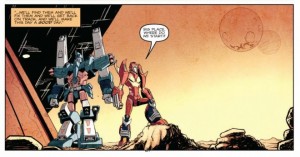 Currently up at Sequart.org, still in their Transformers week of criticism, reviews, readings and interviews, is the first part of a really quite in-depth conversation with True Believers Award nominee and IDW Transformers writer James Roberts - talking all things More Than Meets the Eye! Check out a very brief snippet below, and head here for the rest.

DAVID WHITTAKER: Ok, so starting at the beginning how did the concept of More Than Meets The Eye come about? Had you had any plans for what became More Than Meets The Eye as you were working on cooperative projects such as Last Stand of The Wreckers or Chaos Theory? I ask this because you have seemingly innocuous characters, such as Rung or Whirl appearing in those tales, who go on to become major players. So to speak.

JAMES ROBERTS: Well, the series’ core concept – Rodimus heads off in search of the legendary Knights of Cybertron – was decided back in 2010 by either Andy Schmidt (John Barber’s predecessor as editor of IDW’s Transformers titles) or Mike Costa (who wrote IDW’s first ongoing Transformers title from 2009 to 2011) – maybe both of them. I think Mike came up with the idea of the Knights, although I was never given more than the name when I was asked to write More Than Meets The Eye. Anyway, back in 2010 IDW decided that from January 2012 Mike’s ongoing series would split into two titles, More Than Meets The Eye and Robots In Disguise. One title would follow Rodimus and Drift on their quest, the other would focus on Bumblebee trying to make a go of things on a devastated Cybertron. The Autobots would have fallen out – there would have been some kind of schism – and some characters would side with Rodimus, some with Bumblebee. At the time this game-plan was decided, no one knew what it was that would precipitate the schism, or which characters (beyond Drift) would side with the two Autobot figureheads. It was all really up in the air.

Posted 4 days ago
News Categories: Toy News, Movie Related News, Cartoon News, Comic Book News, Site News, Rumors, Event News, Digital Media News, Collectables, Sponsor News, Game News, Site Articles, Store News, Company News, People News, Press Releases, Reviews, Sightings, Unlicensed Products News, Auctions, Transtopia, Interviews, Knock Offs, Collector's Club News, Editorials, Heavy Metal War, Podcast, Contests, Book News, Top Lists
Click here to post your comment about this news story!
Re: Transformers Week at Sequart.org: Interview with James Roberts (1586445)
Posted by Super Megatron on June 28th, 2014 @ 2:02pm CDT
MTMTE has some of the sharpest writing in any TF books for a long time. Absolutely love the character developments for Prime and Magnus.
Re: Transformers Week at Sequart.org: Interview with James Roberts (1595024)
Posted by Va'al on July 30th, 2014 @ 2:42pm CDT
You may remember the first part of this lengthy, in-depth interview with IDW's Transformers wordsmith James Roberts from a while back. The folks over at Sequart were finally able to post the second part, and you can read it in its entirety here! Take a brief glimpse at some of the great topics discussed, from Chromedome and Rewind's relationship, Megatron's development and the importance of pacing and dialogue, below, too.

WHITTAKER: Knowing you go through that kind of stringent screening of dialogue lends, at least from this reader’s perspective, the characters a certain charming honesty. They seem like real entities rather than just mouthpieces for certain ideas and opinions or to appear simply as catalysts for narrative.

ROBERTS: Thanks! A lot of MTMTE stories are quite high-concept, or if not high-concept then high-density in terms of the plot and the number of things happening at any one time. And because you’re limited to 22 pages and a certain number of panels per page, you only have so much space to convey ideas and information. I try, sometimes successfully, to smuggle exposition into natural-sounding dialog.

I’ve become more confident in how to impart information, and in how good readers are at filling in gaps when you hold stuff back. You can structure a conversation between two characters in such a way that the reader comes in halfway through and discerns the thrust of what’s been said; and then you can dance around a bit and use ‘hard info’ sparingly, but the tone and pace of the conversation, and the order in which certain details are revealed, can lend everything a realistic bounce and ensure that what needs to be established has been established.