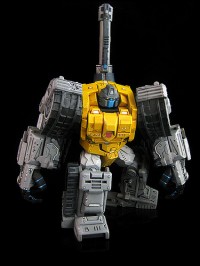 A roundtable discussion with active Transformers Comic readers would likely yield Last Stand of the Wreckers as the best series of 2010. Not only did the series feature fan-favorite characters, but also new additions to the team. They were a handful of obscure Generation One characters, additions that we thought weren't going to make it through the series alive. One of these rookies is Guzzle, a character who hasn't received any love since his small 1988 toy. Customizer frenzy_rumble decided to give the short Guzzle a much needed update From Marvel Crossovers Hulk, check Guzzle out below! Keep it at Seibertron.com - the Ultimate Transformers Resource!

I think impactor and twin twist were both done by AutobotX23. the only other custom I've made from this mold is Universe Warpath.
Re: Transtopia Masterclass - Guzzle (1149400)
Posted by Rated X on November 22nd, 2010 @ 7:14am CST
Hey thats a great use for Marvel and Star wars figures !!! Remove their stuipd heads and put real heads on them. They got a bunch of them Star Wars figures on sale in TJ Maxx for $7.99. I wish I knew how to kitbash. Anyways, nice work dude !!! I like !!!
Re: Transtopia Masterclass - Guzzle (1149417)
Posted by dragons on November 22nd, 2010 @ 8:23am CST
great custom never heard of chraracter wheni see his tank mode it reminds me of this

Re: Transtopia Masterclass - Guzzle (1149502)
Posted by T-Macksimus on November 22nd, 2010 @ 12:21pm CST
Reminds me a bit of War Within Grimlock but I think that has more to do with the color and, in particular, the rear view of the tank mode. Very nicely done custom but then this can be said of all the cutoms that frenzy_rumble does.

dragons wrote:great custom never heard of chraracter wheni see his tank mode it reminds me of this