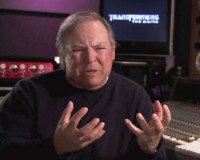 TVWeb.com recently sat down with voice acting legend Frank Welker to discuss his return to the role of Megatron in the ongoing animated series Transformers Prime. Here's what he had to say:

When you first started voicing Megatron and other Transformers characters in the 1980s, did you think this franchise would still be living on through big screen features and new television series almost 30 years later? How do you feel about the way its continued to grow into what it is now?

Frank Welker: (Optimus Prime voice actor) Peter Cullen and I have often talked about that very thing. We had no idea how big the fan base was or how the franchise was growing back then. We never received any fan mail and the only feedback we got was when and if the show was picked up for another season. We didn't have any invites to Bot Cons and the like until just a few years ago, so all of this attention was a surprise, a very pleasant surprise. With the features and the new iterations of all things TF, the new audience and the old supporters seem to remain enthusiastic and that is very meaningful and appreciated.

Frank Welker: I haven't been asked to participate in the new features, but usually we don't know until later because the voice work comes at the end of the production process. I'm not sure if any of the TF's I did in the other features will be returning. I would like to see Soundwave get more screen time he is always a fun character. For Transformers: Revenge of the Fallen, I did his voice in many foreign languages and that was really fun. Hard, but fun. I didn't have a lot of lines but I tried to make the most of them. Japanese was impossible!!!

You've gotten to watch a lot of your fans grow from kids to adults, while constantly getting a whole new wave of young fans every year. Do you feel a certain loyalty to the older fans? Or do you view all fans as equals?

Frank Welker: Again without getting maudlin, the fans are so important and you would be surprised to see how much the studios monitor them. When you have such vocal fans as the Transformer fans they become a voting block and ultimately play a significant role in the direction the powers go. For actors, they keep us in the game so both new fans and old all fans are important...But like old friends, old fans keep you in line because they have known you for the longest.

To check out the entire article, head over to TVWeb.com by clicking here.

Re: TVWeb.com Interview with Frank Welker - Transformers Prime (1375530)
Posted by Bouncy X on May 1st, 2012 @ 11:22am CDT
he did the dubing for other countries? thats pretty cool...outside of jackie chan, didn't think anyone ever did that, much less voice actors and especially for such small roles like he's had in the live action movies.

i wonder of this means he did Dr. Claw for the overseas tv markets since its the same voice he used for Soundwave.