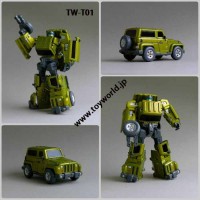 Toyworld has revealed an upcoming third-party Throttlebot Rollbar known as TW-T01. For scale purposes the figure has been posed by FansProject's Backfiery. Based on the teaser image they plan on releasing the whole Throttlebot team.

Posted 3 days ago
News Categories: Toy News, Movie Related News, Cartoon News, Comic Book News, Site News, Rumors, Event News, Digital Media News, Collectables, Sponsor News, Game News, Site Articles, Store News, Company News, People News, Press Releases, Sightings, Reviews, Unlicensed Products News, Auctions, Transtopia, Interviews, Knock Offs, Collector's Club News, Editorials, Heavy Metal War, Podcast, Contests, Book News, Top Lists
Click here to post your comment about this news story!
Re: TW-T01 Unofficial Rollbar Revealed (1374247)
Posted by Supreme Convoy on April 28th, 2012 @ 5:09pm CDT
I had Rollbar as a kid. I loved that figure!
Re: TW-T01 Unofficial Rollbar Revealed (1374254)
Posted by Bumblevivisector on April 28th, 2012 @ 5:26pm CDT
Rollbar was my first Throttlebot, so I thought it was cool to see him acting as Throttlebot leader in Marvel #30 when I finally found it. I've found that some fans who didn't own any of the 6 as kids now consider them so awful they can't even look at them, so they're way past due for new toys with actual articulation and proportions.

Nice touch making his spare tire a gun; I used to pretend it was a little Gatling gun firing behind him in jeep mode. IIRC, he had a firepower of 1 to reflect his not having a gun, and none of the others had guns most of the time in the comics because Ratbat sent them to Earth unarmed, a nice reflection of the fact that you couldn't really even pretend they could wield weapons with their immobile arms.

Bumblevivisector wrote:Hmm, I don't see Wideload's silhouette. He was unique for a dump truck, so it'd be a shame not to take a crack at him. Scale issues though...

Here I thought I was the only one to notice Wideload's silhouette missing from the pic. Freeway was a blue Corvette and that looks like his silhouette in the middle while the white Searchlight and the red Chase could fit for both left and right silhouettes, leaving the bottom one to be the gold Goldbug, the Bumblebee upgrade.

Personally, I'd rather the orange and blue Wideload be made as opposed to the gold Goldbug. If Not-Rollbar's vehicle and robot forms are any indication, these figures are going to be very cool.
Re: TW-T01 Unofficial Rollbar Revealed (1374300)
Posted by wolverinetodd on April 28th, 2012 @ 6:22pm CDT
I also like the metallic paint used on Rollbar, giving him the illusion that he's made of metal as opposed to plastic.
Re: TW-T01 Unofficial Rollbar Revealed (1374390)
Posted by craggy on April 28th, 2012 @ 7:40pm CDT
If I was Wideload I'd be all over it. As is, I'd quite like the other Throttlebots, but not at the price these are likely to go for. Looks real nice though.
Re: TW-T01 Unofficial Rollbar Revealed (1374545)
Posted by Windsweeper on April 28th, 2012 @ 10:23pm CDT
As a huge Rollbar fan, I will pick this up. My only misgiving is the head. I always loved the original head sculpt. It just seemed to ooze character but I'm not liking the linked eyes on this.

Still, I know I'll pick it up. Looks great otherwise.
Re: TW-T01 Unofficial Rollbar Revealed (1374616)
Posted by Oilspill on April 29th, 2012 @ 1:12am CDT
I really like this idea, love the throttlebots and they've never had any re-releases that I can think of (except for Goldbug of course).

Hope they do make a Wideload as well. Gotta have the whole set.
Re: TW-T01 Unofficial Rollbar Revealed (1374661)
Posted by DMSL on April 29th, 2012 @ 3:20am CDT
Looks fantastic, not sure if i dig the wheelgun though. Rather have a pistol that's stored underneath the vehicle or inside the tire but hey....sculpt looks brilliant so just a minor complaint.

If they do release the others i'll skip Goldbug as i just got the Renderform Gold Scout kit and that will look fantastic when i put that on my United Bee.

Btw i agree with what others said, if they really want to do the others they should definately not skip Wideload.

Perhaps these figures will have the pull-back engine feature?

DMSL wrote:Perhaps these figures will have the pull-back engine feature?

Only if they're bricks, for G1 accuracy!

Only slight complaint is that those bumps on his chest/roof will make it difficult to place an Autobot insignia on there.

Looking at the silhouette, it appears Goldbug will be based on the new VW Beetle which is exactly how it should be.
Re: TW-T01 Unofficial Rollbar Revealed (1374931)
Posted by Mykltron on April 29th, 2012 @ 6:47pm CDT
I need some Decep cars but the price of these things is so off-putting. Love the design though.
Re: TW-T01 Unofficial Rollbar Revealed (1419707)
Posted by daimchoc on September 13th, 2012 @ 9:04am CDT
GrindRod - c/o Toyworld's facebook page.

Darn you Daimchoc, I was only minutes behind posting about this!
I have had to check these pics over on The Allspark, and he looks sweeeeeet!

Is he Deluxe or Voyager though?