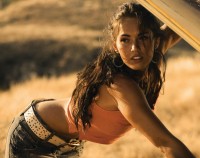 As hard as it is to believe, it's December already. Beyond the holiday rush, one thing that means is that many are already looking towards the new year, and in this case the new decade.

That also means that the "recaps" and "best of lists" for 2009 are already out in full force.

In keeping with that theme, Yahoo! has presented their 2009 - Year in Review, which among other things features their top internet searches of the year. Not surprisingly, Transformers and more specifically the blockbuster movie Revenge of the Fallen are well represented. In fact, ROTF actress Megan Fox ranks #4 in Yahoo's overall Top 10 most searched list. Here is what Yahoo! had to say about her ranking.

Like her or not, Megan Fox was one of the biggest stories of 2009. Best known for looking sultry on the red carpet and acting offended when compared to Angelina Jolie, Ms. Fox also made (more) headlines by bashing "Transformers," the film franchise that made her famous.

But then "Jennifer's Body" hit theaters. After the hipster horror flick headlined by Fox tanked at the box office, the oft-ogled starlet changed her tune about the robots in disguise.

Although some question Ms. Fox's ability to sell tickets, nobody can doubt her canny ability to drive searches wild.

In a somewhat related story. even though the US car industry has been struggling at best, the Chevrolet Camaro has been one domestic model that has definitely risen above that. In fact, the 2010 Chevy Camaro actually was the most searched car model on Yahoo this year. Revenge of the Fallen and of course Bumblebee definitely had a lot to do with that.

You can view the Top 10 overall searches here and the Top 10 most popular car models here.

they just want to see her naked...

What a remarkably cynical yet accurate perspective.