Actor Leonard Nimoy Passes Away at 83 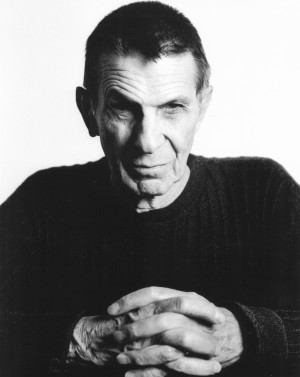 Multiple reports are confirming a sad happening for the end of this week. Established and well-known actor Leonard Nimoy, pillar of science-fiction cinematography through Star Trek character Mr Spock, and part of the Transformers universe in the 1986 animated movie (as Decepticon Leader Galvatron) and the live-action 2011 feature Transformers Dark of the Moon (as Sentinel Prime), passed away earlier today at the age of 83. An extensive retrospective on his long career can be read here. The staff of Seibertron.com offers its condolences to Nimoy's family and loved ones. He lived long, and truly prospered.

Mr. Nimoy announced last year that he had the disease, which he attributed to years of smoking, a habit he had given up three decades earlier. He had been hospitalized earlier in the week.
Continue reading the main story

His artistic pursuits — poetry, photography and music in addition to acting — ranged far beyond the United Federation of Planets, but it was as Mr. Spock that Mr. Nimoy became a folk hero, bringing to life one of the most indelible characters of the last half century: a cerebral, unflappable, pointy-eared Vulcan with a signature salute and blessing: “Live long and prosper” (from the Vulcan “Dif-tor heh smusma”).

never got to meet him but i got the closest i possibly could last year when he did a live Skype event at our Comic Con. so got to watch him on screen be very engaging and funny, taking questions from the audience which varied from little kids to Trek cos players. and those of us who sprang for the special "Nimoy Package" also received a pre-signed autographed photo.

so with this news, i shall treasure those memories along with the autograph even more!!
Re: Actor Leonard Nimoy Passes Away at 83 (1656794)
Posted by Fires_Of_Inferno on February 27th, 2015 @ 12:13pm CST
"A life is like a garden. Perfect moments can be had, but not preserved, except in memory. LLAP"
-Leonard Nimoy

That said, he seemed to be as active and making the most of life right to the end.

He is legend, and we are all better having received the gift of his talents over the years.

If there are any smokers reading this, I won't be preachy and tell you to quit, but Mr. Nimoy spent time to explain how his smoking help lead to the cause of his passing, please seek out his writings.