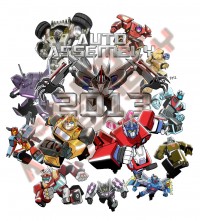 Another quick note from the Auto Assembly team. Get your tickets here!

If you haven’t already booked your tickets for Auto Assembly 2013 then time is running out FAST! You now only have one week to pre-register for Europe’s Largest Transformers Convention online and then after that point you will only be able to buy tickets on the door!

Every year the queues to get into Auto Assembly keep getting longer and longer, and pre-registering is the best way to ensure that you can have the best shot at getting to the dealers tables early on each day and getting the best seats for all the guest Q&A panels! If you pre-register, you can collect your passes from 12:30 pm on Friday afternoon for full weekend ticket holders or from 8:30 am on Saturday or Sunday and then get instant entry to the convention when the doors open.

However, if you pay on the door you will need to buy your tickets on the day and these won’t go on sale until 6:00 pm Friday for weekend attendees (when the Friday night programme begins) or 9:30 am on Saturday and Sunday once the doors open. What this means is that while all our pre-registrants are already making their way around the convention, you could still be at our Registration Desk or in a line waiting…!

So if you haven’t booked yet, head over to the Auto Assembly website now to get your tickets for what is going to be one of the best Transformers fan events of the year! So remember, pre-registrations close on Thursday 1st August 2013!

Auto Assembly 2013 is Europe's largest Transformers convention and is taking place over the weekend of 9th - 11th August 2013 at the Hilton Birmingham Metropole Hotel. To book your tickets or find out more including details of all the dealers attending, all of our guests and a full schedule for the weekend, visit the website at www.autoassembly.org.uk

Hope to see you all in August!

Auto Assembly is sponsored by

We want to thank everyone who has pre-booked their tickets for Auto Assembly 2013 and who have once again helped us set a NEW European record for a Transformers convention! We are aware that many of you will have now missed the deadline for getting your tickets for the convention, especially as we had bookings open until 48 hours before the convention last year, but don’t worry…

Despite a record turnout again, the Hilton is a MASSIVE hotel (the largest convention hotel in the UK) so we do have enough spaces left for all of you who may be interested so you WILL be able to come along to the convention and pay on the door and get into the full convention – all the panels, workshops, and experience everything that Auto Assembly 2013 has to offer. The only differences for on-the-door attendees is that you won’t get a personalised pass, and entry to the convention will take longer as you will have to complete a booking form on arrival so we will have your correct details on file for health and safety purposes. In addition to this, everyone who has pre-registered for the convention will be able to collect their passes from 12:30 pm on Friday afternoon or 8:30 am on Saturday and Sunday and will be able to enter the convention immediately when the doors open at 6:00 pm Friday and 9:30 am on Saturday or Sunday.

If you are paying on the door, you won’t be able to buy tickets until 6:00 pm Friday if you are purchasing a weekend pass or 9:30 am on Saturday or Sunday for those of you buying single day tickets after all our pre-registrants have entered the hall. Prices for tickets on the door are £50 for adults for the full weekend and £38 for Youth (under 18) and Elderly (60+). Single day tickets are £28 for Adults and £22 for Youth and Elderly. Under 6′s are FREE!

Anyway, to all of you who have booked, once again we want to thank you for helping to make the convention the success that it has become and for those of you who have missed the deadline, we hope that you’ll come along next weekend and join us for a great weekend celebrating everything that makes Transformers so special!

Re: Auto Assembly 2013 Pre-Registrations Close In One Week (1508616)
Posted by Va'al on August 2nd, 2013 @ 12:50pm CDT
Tranformers artist Alex Milne has yet some more art-based news for Auto Assembly goers: cover sketches and prints! Take a look below for more detailed info, and head over to the thread on fellow fansite Full Metal Hero for your request.

hello all
since AA is right around the corner I thought I'd pop in to give people a heads up about something new I will have at AA
by will of good fortune and thanks to my friend Josh Burcham I have come into possession of some MTMTE issue 1 sketch covers which I will have at the convention.
due to the limited number of them I have I will only be able to do about 10 of them,
as with the other sketch list I created, I thought i would get a head start and post up the 10 slots here.
same rules apply to the sketch covers as with the head sketches. the only thing is it's £5 extra for the comic. so B&W would be £20 and colour would be £35

please note that if your interested in more then one characters, that would cost more, but will be discussed in person or by PM

also I dont not have any issue 17 sketch covers, i just used them as examples. I only have sketch covers for issue 1

so there are 10 spaces available. pick up for these I would like it to be end of day Sunday so there would be lots of time to work on them I might have more at the show, but right now 10 is what I'm comfortable working on

I will be selling prints. each print will be £10

I will also have copies of the exclusive Stadium comics cover for spotlight megatron to sell. each copy will also be £10

if any are interested in the exclusive cover, please let me know so i can set some aside. it would also give me an idea of how many to bring due to space being limited for travel
thanks a lot

can't wait to see all of you next week


edit: I will check back in 3 hours or so to see if the list fills up and to let people know that their sketch is on the comic sketch list

ALSO. PLEASE DON'T SWITCH A SKETCH FROM THE OTHER LIST TO THIS ONE. it would be unfair to those who i wanted one and didn't make it onto that list. thank you

Neurie wrote:Woo hoo! That's my copy of MTMTE with the Cyclonus on it

Re: Auto Assembly 2013 Pre-Registrations Close In One Week (1509687)
Posted by Va'al on August 6th, 2013 @ 7:15am CDT
Artist Nick Roche has just tweeted the line-art for one of his Auto Assembly prints, featuring the MTMTE cast -- sort of. Check out below the More Than Meets the Bad Guys print in black and white!

(Note: These will also be available at other conventions, depending on how many Roche prints out; he has already confirmed their availability at DICE 2013.)

And in full colour, by Josh Burcham!

Banjo-Tron wrote:This is going to be an awesome convention - Geoff Senior to attend too!

Gah. Yes, forgot to post that one. Hnnng.
Re: Auto Assembly 2013 Pre-Registrations Close In One Week (1509707)
Posted by Va'al on August 6th, 2013 @ 8:40am CDT
Yet more announcements from Auto Assembly, Europe's biggest Transformers convention! This time, it's another addition to the guest roster, and yet another member of the ReGeneration One line-up: Geoff Senior! Check out the release below.

With just a few days to go, we couldn’t let things rest without a few final surprises for all of you attending – or planning on attending Auto Assembly 2013 this coming weekend… We are proud to announce the return of Marvel UK artist Geoff Senior to Auto Assembly. Geoff last joined us a few years ago when we celebrated the return of cult character Death’s Head to print but following his return to the world of Transformers through IDW’s Regeneration One providing covers for this continuation of the Marvel US series, Geoff is joining all of the other UK creative talent who will already be at the convention.

Geoff will be on hand selling prints and sketching for attendees on Saturday as well as taking to the stage with all the other Regeneration One team for the single biggest Regeneration One Panel ever collected at a Transformers event. Not booked yet? Tickets will be available on the door starting at just £22 for under 18s and £28 for adults.

With just a few days to go do we have anything else to announce? Hell yes!

Sodan-1 wrote:Possibly one of the most obscure line-ups ever.

Obscure? The print or the guests?

Sodan-1 wrote:Possibly one of the most obscure line-ups ever.

Obscure? The print or the guests?

Lol, the print sorry. I know it makes sense given the context. It's just refreshing not to see the same few Autobots all the time.
Re: Auto Assembly 2013 Pre-Registrations Close In One Week (1510280)
Posted by Va'al on August 8th, 2013 @ 9:27am CDT
Artist Nick Roche has prepared yet another print for this year's Auto Assembly, and quite likely future conventions too. This one, like the More Than Meets the Bad Guys one, is also based on MTMTE, and is titled 'The Wake'. Take a look at the linework below! And one more time with colour, by Josh Burcham!

wouldn't mind getting a copy at some point
Re: Auto Assembly 2013 Pre-Registrations Close In One Week (1510314)
Posted by Banjo-Tron on August 8th, 2013 @ 10:52am CDT
Bah - is anyone else annoyed that the Cybertronian Times is not getting printed this year? 'tis a real shame

Was the first convention I've been to, definitely thinking of going again next year now
Re: Auto Assembly 2013 Pre-Registrations Close In One Week (1511113)
Posted by Banjo-Tron on August 11th, 2013 @ 2:26pm CDT
Yeah, I'm looking forward to the next one already! It was a real treat to get a sketch from Geoff Senior! All the guests were brilliant, friendly etc. well, with the exception of Alex Milne who was just non-communicative to the point of coming across rude. Maybe he's just uncomfortable with conventions. Amazing artist though. Dan was just awesome and his wife was really friendly too. And Neil's Q&A was hilarious. I didn't realise how versatile a performer he is.
Click here to view additional comments about this topic at the Energon Pub Forums ...