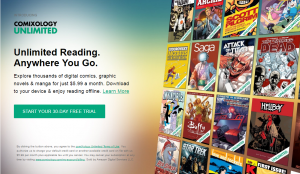 Howdy fellow Seibertronians; are you ready to delve into the world of comics, catch-up with the current conversation or just continue your favorite ongoing series? Well the new Comixology Unlimited service may be just what you're looking for. Fellow user Flashwave has pointed us to a ComicBookResources.com article explaining the new service. And of course a wide variety of Transformers comics are included in Unlimted.

Highlights are as follows:
•Unlimited reading of selected rotating titles
•Read online or offline on your device
•Recommendation tools
•30 day free trial
•$5.99 a month
•US only, more regions to follow

The entire article can be read here and to be taken to the official Comixology site to sign up for a free trial, click here.

Remember to keep your browsers pointed to Seibertron.com for the latest in Transformer news, the largest Transformers galleries found on the web and the liveliest Transformers discussion this side of a space bridge.

If it's rotating titles does that mean a Transformers title I'm reading one month could be unavailable the next and then back again at some later date? And how often do the titles rotate? Weekly? Monthly? Yearly? They could really use more information there.

Emerje wrote:Sounds like a great deal, but this part is rather worrisome:

If it's rotating titles does that mean a Transformers title I'm reading one month could be unavailable the next and then back again at some later date? And how often do the titles rotate? Weekly? Monthly? Yearly? They could really use more information there.

I went ahead and signed up for the trial, but yeah - more info plz!

Not all the RID and none of the MTMTE or Sins of the Wreckers comics are available. So I'm guessing not the newest releases. You can download the comics, but I'm going to assume there is an expiration date built in so they stop working at a certain point. Checking out digital books from the library works the same way. When you select a comic that is part of Unlimited you have three choices; Borrow / Buy / Wishlist. Borrow struck me as an odd choice, but makes sense.

I haven't tried it out yet and there really is little info available (I dug around pretty thoroughly and signed up before posting). I'm guessing something like Netflix where movies/shows come and go, probably a licensing deal. I set myself a reminder to cancel before they charge me just in case.

I'll have to pull down a comic or two tonight and give it a whirl. It will be interesting to see how this pans out. I've been wanting to do some more reading; maybe this will be the catalyst I need to get back in. I'll load my tablet full when I get a chance and report back here once I get a good feel for the service.
Re: Comixology Unlimited - Online Comic Subscription Service (1792415)
Posted by Flashwave on May 24th, 2016 @ 11:47pm CDT
After submitting the article, I pulled down a few comics myself. Looks like most of the spotlights and older IDW works are on there. It's interesting that RID Vol. 6 is NOT on the Unlimited list, but 5 and 7 are. My guess, is that they are trying to use this as a way to generate traffic for older less read titles, that maybe new readers might be interested in, thereby giving value to whatever licening agreements they have, as well as a way to advertise and hook people on a series, enticing them to buy the following volumes, such as the RID seriesthat they might then buy the current releases. Sneaky sneaky.