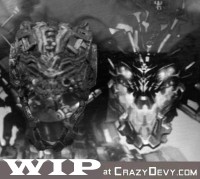 Seibertron.com member Jenus was so kind as to inform us that the youngest unofficial 3rd party toy manufacturer crazydevy has updated their website.
The company that seems to have taken a liking to Devastators has recently announced that they will be releasing an upgrade set for the ROTF Legends Class Devastator called "Mean Robot Power parts", this set consists of hand replacements, a pair of wreaking balls and as of now a new head.

As you might make out from the image the new head is going to be more movie accurate.

Stay tuned to seibertron.com for all your Transformers related news.

Heh, I can't even make out what the hell that is lol!

ha im glad im not the only one looks more like meatball with machine parts afdded to it be big help if it was in color like all the other pictures i actually thought the head comes with htis set was prety acute to me with the red details in the face who knows.

once colro version of this new gets released i like to see comparison show with the original head & the new side by side see what looks better
Re: Crazydevy.com Mean Robot Parts Update - New Head (1045209)
Posted by Rated X on February 7th, 2010 @ 11:23pm CST
Why dont they make add on's for the supreme class Devastator ??? The legends class figure looks like it was made for children under 3 no matter how you spice it up. How about some bad toys for big boys ??? LOL