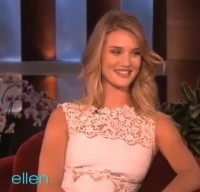 Maxim Magazine's Most Beautiful Woman of 2011, Rosie Huntington-Whiteley, recently appeared on The Ellen Degeneres Show and spoke about her experience while filming her first film Transformers DOTM. Check out the embedded interview below.

KorbinJones wrote:I'm not a Megan Fox fan to begin with. When I heard "Carly" was going to be in this movie, I didn't care who it was. I'm sold on Rosie as long as she kicks some robot ass...

I want to show you Guys & Gals just how much I dislike Megan Fox.

I made this stopmotion short explaining what happen between ROTF & DOTM.

El Duque wrote:Maxim Magazine's Most Beautiful Woman of 2011, Rosie Huntington-Whiteley, recently appeared on The Ellen Degeneres Show and spoke about her experience while filming her first film Transformers DOTM. Check out the embedded interview below.

Just my opinion, but she sounds more down to earth than Megan Fox in the interview.
Re: DOTM's Rosie Huntington-Whiteley Interview (1220149)
Posted by sentinelprime1234 on May 10th, 2011 @ 7:37pm CDT
Megan Fox is way skinnier then her, Rosie is very sexy looking, and cute lol
Re: DOTM's Rosie Huntington-Whiteley Interview (1220212)
Posted by T-Macksimus on May 10th, 2011 @ 9:18pm CDT
I haven't paid much attention to Rosie outside of DotM stuff and the Maxim article. I damn near sprayed Mt. Dew all over my monitor when it came up that she was dating Jason Statham. That lucky son of a... well, anyhow I agree with SKYWARPED_128, she does seem a lot more down to earth than Megan. This is the second interview I've seen her in and she just seems a lot more personable. I don't think that continued big screen gigs will do to her what they have done to Megan and some many other young actors/actresses. She strikes me as being a lot more grounded and I have always had the impression that Jason Statham is the same way so he'll keep her from turning into an uber-b**ch!
Re: DOTM's Rosie Huntington-Whiteley Interview (1220232)
Posted by NatsumeRyu on May 10th, 2011 @ 10:16pm CDT
LOL, every one's debating whether she's "hot" or not.

I remember a long while ago (RoTF time frame) I heard one person complain about lot's of British accented bots in the two movies. And so when she said she had a British accent in the movie I was laughing thinking about that. haha.

Hip-Hoptimus Rime wrote:
Heh, reminds me of the epsiode of "Archer" where Lana is getting guys to have revenge sex with, and an openly-gay character is in line for a turn. Someone asks him why, since he's gay, and he answers, "Nobody's that gay."

Sweet! An "Archer" reference. Similarly, perhaps Megan Fox has Johnny Bench hands?
Re: DOTM's Rosie Huntington-Whiteley Interview (1220300)
Posted by vectorA3 on May 11th, 2011 @ 2:27am CDT
She seems more intelligent than Fox. Also doesn't seem jaded. But still not hotter than Olivia Wilde, Munn or Beau Garrett.
Re: DOTM's Rosie Huntington-Whiteley Interview (1220697)
Posted by Jazz-1982 on May 12th, 2011 @ 2:32am CDT
The more pictures and footage of Rosie that i see, the hotter she looks. Although I seem to have been one of the few people who was disappointed to hear that Megan Fox wouldn't be completing the TF journey with the rest of the original cast. I'm also proud to see the UK being represented in the Transformers cast.

Shia Lebouf seems to have a good record with his female counterparts. There was more than enough smoke to suggest a fire with him and Megan Fox and with Carey Mulligan as well in Wall Street 2 so I wonder if he tried anything with Rosie.
He'd have to deal with her boyfriend Jason Statham if he did...