All of today's featured auctions are unique items straight from Seibertron.com. I'm gearing up for my wedding, which is later this year, so it's time for these special items to find new homes. Enjoy!

This auction is for the Transformers ARMADA IP CREATIVE BIBLE. I received this item via the mail from an anonymous fan of Seibertron.com a few years ago. I forgot that I had this until recently when I was going through a box I had in my basement that I hadn't opened from when I moved back in 2008. Now engaged, I thought I'd save this item for when I have a massive blowout of extra stuff to help pay for wedding expenses. This "bible" was published on October 29th, 2001 (about 9 months prior to Hasbro's release of Transformers Armada). It is 56 pages long which includes the cover which I believe features unique artwork. There is also an additional set of paperwork included with this which includes 27 black-and-white "product" pages that feature product shots, "animated" (box) artwork from Dreamwave (months before their first comic hit the stands), and artwork from Aeon (the cartoon's primary animation company). Read more about this special item here.

This auction is for a unique one-of-a-kind item that I received as a gift from Hasbro in early 2009. This item is a MISB 25th Anniversary Optimus Prime reissue in Transformers Universe packaging. The front window of the packaging is autographed by the 2008 (early 2009???) Transformers Brand Team from Hasbro. This item is really special to me. It bums me out that I have to part with it but I need help paying for my upcoming wedding so it's got to go. Hopefully whoever wins this auction will appreciate how unique and special this item is to die-hard Transformers collectors as much as I did.

Other than one signature on the window that I can't decipher, I believe all of the other autographs belong to the following people ...

This auction is for a BEAST WARS Transformers PRESS KIT (Press Release) from Alliance. The press release is dated "May 27th, 1996" and is 13 pages long (including the "cover" page). The contents are as follows:

I don't remember how I got my hands on this. I can't remember if they were handing them out at Botcon 1996 or if I received it directly from Mainframe for my old "Trans-Forum" newsletter (the precursor to Seibertron.com that was published from 1996 to 1999). Some of the edges of the paper have started to yellow and the staple is getting a little loose that holds the pages together. 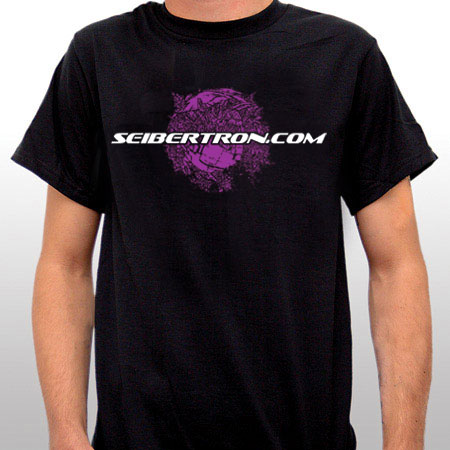 This auction is for an official XL Seibertron.com T-SHIRT. It is a black t-shirt with the Seibertron.com logo over the planet Cybertron. The logo is white over a purple planet Cybertron. This is the perfect chance for you to buy your shirt to show your support at BotCon 2010. Speaking of which, the annual Saturday Night party just happens to fall on Seibertron.com's 10th anniversary on June 26th. The photos in this auction are examples of the item that you are bidding on.

This auction is for ALL THREE of the unreleased Target exclusive Movie scout class figures from 2008. This auction includes three MOSC Transformers figures Gunbarrel, Reverb, and Backtrack. These three figures were canceled and were never officially released in the States. The photos in this auction are of the actual items that you are bidding on. Please refer to the pictures for further information and to judge the packaging condition of these items.

This week's featured seller is none other than chicagorhinox, the official eBay account for Seibertron.com. Here's a list of all of the items that are currently available from Seibertron.com:

AutobotJazz wrote:just ordered me one of the Seibertron shirts. Wanted one for a while now.

same here cost a fortune in postage (to the uk) but hey, im happy i got one

Optimus has his combined head, Red Alert's head is completely white minus the visor, and Hotshot... wow, can't say alot about him, considering he looks NOTHING LIKE HIS TRUE SELF!!!

Re: Featured eBay auctions: Armada Bible, Hasbro autographed toy, BW Press Kit, & Seibertron t-shirts (1072621)
Posted by LiKwid on May 9th, 2010 @ 5:57pm CDT
Just got one of the seibertron.com shirts..SoOOOOoOO Sportin it Botcon!...That is..if we ever get to register