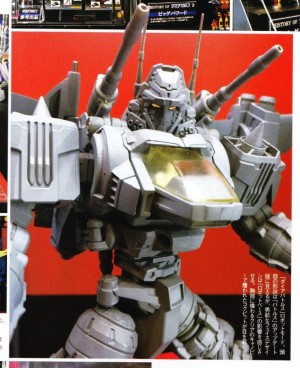 Fellow Seibertronian Powered Convoy, also an active member over at fellow fansite the Allspark, has sent us some high-resolution scans of previously revealed or seen coming items from Takara Tomy's stables and their licensees, courtesy of the Figure King magazine issue #210. You can check out the images mirrored below, featuring Diaclone Diabattle, MP-27 Ironhide, Q Transformers, UW Devastator and more!

Carnivius_Prime wrote:How much is that movie Optimus Prime (in the window)?

Two herds of cattle and three acres of land.

Carnivius_Prime wrote:How much is that movie Optimus Prime (in the window)?

Two herds of cattle and three acres of land.

Awesome. I'll go win the lottery and then I can buy all the big highly detailed movie figures like that one and also afford a bigger home to display them in.

And also I wouldn't mind driving about in an actual Prime truck so I need to see how much one of those would be too. Also I need to pass my driving test.

Awesome. I'll go win the lottery and then I can buy all the big highly detailed movie figures like that one and also afford a bigger home to display them in.

And also I wouldn't mind driving about in an actual Prime truck so I need to see how much one of those would be too. Also I need to pass my driving test.

Ooh! Display your collection in the traiker! I reccomend sturdy shelves tbough if you drive like Mario Andretti

Q: What were the details of having chosen Devastator as a large scale item this time?
A: The proposal was from Hasbro. They referred to it as "a kickass product", because Metroplex, a project that many fans wished for to be realized as a super giant product, was popular, it came to be that Devastator was chosen as the second one. It was done due to the timing of the Combiner Wars series just being developed, and so the plan to try and turn it into a product to symbolize the Combiner Wars was advanced. In order to cover the correspondingly large sum investment, it seemed to have been a difficulty even for the Hasbro company to let such a plan be accepted.

Q: How did you decide on the size?
A: The height of the previous figure Metroplex, I considered the play value of combining and it was calculated that the size would have "a height of 45cm". This height and "the fact that 6 Constructicons combine and turn into 1 robot", "that it would be 6 newer and different types of construction machines" were the essential conditions from the Hasbro company. To clear these conditions, it was okay to disperse/vary the height of the disconnected robots , although the design before and after combining changed from the time of G1, it was good. But after all apart from myself I thought about how the respected G1 Devastator configuration should be; then I proposed the current design. Because I thought this was the course of action that the fans strongly wished for. So, implementing this height of 45cm was accordingly difficult, for the combining process I had to come up with several clever ideas.

Q: In total, this is considerably close to the G1 version, right?
A: Concerning the points that are designed based on the original G1 version, it's constructed similar to a masterpiece (transformer). The toy of course incorporated elements of the anime design. In fact to clear the tight development schedule, there are parts where I appropriated ideas for use in an MP Devastator that I had written down a long time before. I thought: "doesn't this seem like the only chance I can make a giant MP Devastator, if I do my best here then the thing that the fans eagerly waited for can be realized". I had the sense that there was nothing like it before. If it surpassed a masterpiece wouldn't that be terrible (smile).

Q: What were the points in development that troubled you?
A: Generally speaking the development schedule and parts count was strict, you know. Because making 6 voyager class (figures) rather than having prepared only a development schedule and parts count for making just 1 Metroplex (figure). Usually if you make one, a hypothesis is made for the mobility that every robot can use, the degree of mobility legs and arms move before and after. Generally, because there was no precedent for such a size of Transformers combiner, several things were quite difficult.

Q: For the modern combiner warriors multiple people were in charge, you (Hasui) alone were responsible for Devastator, right?
A: Yes. Because it was a product that if you did not make and look at the complete balance by yourself, you would never reach the goal. But, the advancement of 6 combiners at the same time was a continuous hardship which I had not experienced up to now.

Q: This time you turned surplus parts into weapons, right?
A: I was also able to construct it so that surplus parts got lost/disappeared, but if I did that the parts count and hinges would increase have and the cost would have risen. Still, at first due to making 6 (figures) and being at the limit, there was no spare room for making weapon parts. For that reason, to make them separate items at the time, I dared to propose to make a few parts into handheld weapons.

Q: What kind of itmes are you (Hasui) presently in charge of?
A: Currently I'm in the middle of being in charge of foreign items. Of the currently released some things from "Generations", in "Adventure" I'm in charge of Big Bumblebee and Big Grimlock. For the extending gimmick in Big Bumblebee's feet I took some hints from 'Sky Garry' (this thing: ‚b|‚R‚U‚O ƒXƒJƒCƒMƒƒƒŠ[). For Big Grimlock also generally__ I became aware of a different transformation, it became a product that specialized in a degree of satisfaction and sense of accomplishment according to the transformation. For these the concept of Kung-Fu like and somewhat flashy transformations, that made you look and be surprised was called "Trans-Fu".

Q: Please let us hear the salespoint for Devastator as a developer.
A: For the domestic specifications I want to think that I wanted to focus on the separate characters, to reflect that. As separate items they are easy to play with, please experience the times they can turn into things that can be enjoyed. In any case I aimed to the last to produce the G1 image. I combined masterpiece and also scale, I aimed for a tall height that was bigger than Prowl and the others and smaller than Soundwave. After combining, in particular scenes the size was all over, but (smile) I combined the images and mixed together masterpiece and generations, if you can play with a Devastator that's just as you like that's enjoyable, right?