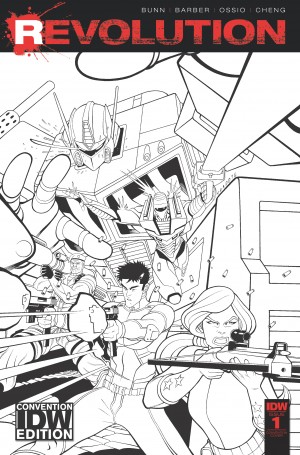 With New York Comic Con 2016 just round the corner, we have a press release directly from IDW Publshing with their exclusive releases for the event - but in terms of Transformers, Revolution is the only related title taking the stage! Nonetheless, check out the variant exclusive cover below. And Rom the Spaceknight.

IDW Publishing Announce NYCC 2016 Exclusives & Debuts
IDW Publishing is heading to New York Comic Con with a ton of exclusives you won’t want to miss! See below for a full list of your convention must-haves.
NYCC EXCLUSIVES

IDW Entertainment currently serves as the worldwide distributor of Wynonna Earp airing on the Syfy Channel in the U.S. and is producing BBC America’s Dirk Gently, based the best seller by Douglas Adams starring Elijah Wood and Sam Barnett, and Brooklyn Animal Control for USA Network.

This occasional feature on Seibertron.com is a one-off (three-off?) write-up on those other titles that don't fall under the robots categories, so you may go find more comics if you like what you see. The reviews are brief, with an eye to connecting them to the wider story and what readers might enjoy coming from a Transformers perspective, so please keep that in mind. [For an alternate and more systematic look at how Revolution is currently working out, see ScottyP's comics FAQ here!]

Cullen Bunn, whom regular comics readers will undoubtedly recognise from several Marvel and other titles, dives deep into the Microverse, reigniting a spark in a very very old and dormant fire that not many may have remembered. However, he does so with such gusto and charm, even in the obnoxiously 80s patina that most of these properties have, that you can't help but chuckle at the interactions and overt cheese of some of the scenes. The Biounits, Acroyears, names - they just made me giggle so much, reading them in 2016. At the same time, Baron Karza is beautifully nuanced as a villain, and actually has a good characterisation through the Revolution book itself.

Bonus: Direct and unexpectedly good link to Cybertronian lore. Ties up with Transformers franchise in general, with things discussed in Titans Return, and with the covers teasing

Malus (but not really): The cheese. The name Shazraella.

As it hasn't had enough time to go anywhere significant, there's not really too much to say about this one-shot comic - if not that it's probably the most played down and yet the most direct in terms of how G.I. Joe and Earth in general are planning to respond to the Cybertronian contingent and the perceived threat that Optimus's annexation of the planet to the Council of Worlds constitutes for, well, us. Written by Brandon Easton, with visuals from Tony Vargas and Jordi Esquin, the book is a crisp if slightly by the numbers origin story of the Kommando at the hands of Miles Mayhem, building to some interesting dynamics with the Joe envoy Scarlett. And then, it just... stops. Which is a shame. (But will start/continue in November as its own series!)

Bonus: Ego trips all over the place.

Malus: Ego trips all over the place.


and ROM the Spaceknight #1-#3, Revolution #1
(takes place in between issues. maybe. possibly. or before.

Currently running through three issues of its new ongoing series, with Chris Ryall and Christos Gage at the helm, the return of the Solstar system guardian had a very promising beginning, with a bit of a plateau after the second issue hit. With a giant team taking control of the art, there are some really sweet spots visually too, but sometimes the story just doesn't hit the right beats enough to hold it all together.

Bonus: The designs (Wraiths and Rom in particular) are fantastic, and the book is the one that will providing the biggest cohesive for the various threads and titles so far, with its planet/universe wide conspiracies.

Malus: May not be one to follow too closely if it doesn't catch you immediately, and it does have a lot of Ryallisms (compare: Onyx), but that may be your thing!
Re: IDW NYCC 2016 Exclusive Revolution Cover and Press Release (1829665)
Posted by william-james88 on September 30th, 2016 @ 10:35am CDT
Why are they called mask if what they are wearing is more along the line of helmets?

william-james88 wrote:Why are they called mask if what they are wearing is more along the line of helmets?

Re: IDW NYCC 2016 Exclusive Revolution Cover and Press Release (1829822)
Posted by Va'al on October 1st, 2016 @ 1:11am CDT
Before you dip into the preview for IDW's Revolution #3, take a look at the full opening sequence for the second issue of the cross-franchise event, coming out next week in print and digital: as Comics Alliance posts the first seven pages of Revolution #2, plus all of the covers that come with the issue! We will be reviewing this on Wednesday, too, but feel free to join the discussion in the Energon Pub before then!

Revolution #2 (of 5)
Cullen Bunn & John Barber (w) • Fico Ossio (a) • Tradd Moore (c)
ROM—A MURDERER?! That’s what OPTIMUS PRIME and the TRANSFORMERS think—and right or wrong, there’s only one outcome: all-out war! Meanwhile, G.I. JOE turns to the one person who can save the world from ultimate destruction—MILES MAYHEM!
FC • 32 pages • $3.99

Microraptor wrote:I love how it specifies Jazz liked "that" left arm, like there are others and he just really liked that particular one.

It was his special left arm; there is no other like it!

It's basically the plot of the whole issue! *rolls eyes* *still sorta enjoyed it*

All things considered, it's probably a wise choice to establish ROM as a potential threat to Cybertronians. They both work on gobbledy-goop sci-fi magic, so there's no real dissonance there. He's a threat to them in the same way that a monkey which could punch with the strength of a buff adult humie would be threatening to us.
Re: IDW NYCC 2016 Exclusive Revolution Cover and Press Release (1830456)
Posted by ScottyP on October 4th, 2016 @ 11:36am CDT

It's basically the plot of the whole issue! *rolls eyes* *still sorta enjoyed it*

ScottyP wrote:I don't mind it. If it was Death's Head we'd all be saying it was the Best Thing Ever. Which it would be, yes?

I miss that Freelance Peacekeeping Agent.
Re: IDW NYCC 2016 Exclusive Revolution Cover and Press Release (1830470)
Posted by o.supreme on October 4th, 2016 @ 1:16pm CDT
I guess its a good thing that Hasbro/IDW has control of ROM now over as opposed to Marvel. But a while back, when I was looking at concept art for the animated series Avengers: Earth's Mightiest Heroes. The "season 3" that never came about because of Jeph Loeb

. ROM was going to be featured in at least one episode. This was back in 2013, imagine what that small cameo would have done to boost that characters popularity.
Re: IDW NYCC 2016 Exclusive Revolution Cover and Press Release (1830600)
Posted by Shot Put on October 5th, 2016 @ 8:23am CDT

o.supreme wrote:I guess its a good thing that Hasbro/IDW has control of ROM now over as opposed to Marvel. But a while back, when I was looking at concept art for the animated series Avengers: Earth's Mightiest Heroes. The "season 3" that never came about because of Jeph Loeb

. ROM was going to be featured in at least one episode. This was back in 2013, imagine what that small cameo would have done to boost that characters popularity.

That was essentially fanart one of the show's character designers made to show what he would have liked to see. Rom would have never shown up in season 3 because Marvel never owned him.
Click here to view additional comments about this topic at the Energon Pub Forums ...