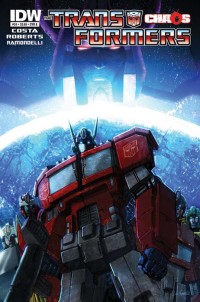 The fine folks over at Comics Continuum have shared with us IDW's Solicitations for August. Among the Ninja Turtles and GI.Joe action are three Transformers comic releases. The Ongoing Transformers series continues its bi-weekly trend with #23 and #24. The third comic is a Transformers Classics: UK Vol 1 Paperback. It also looks that July spells the last of the Movie-verse IDW run that has run for 4 years. Check out the spoilers and covers below!

Written by James Roberts, art and covers by Alex Milne.

CHAOS Prelude! Last issue, you discovered the first ever meeting between Optimus Prime and Megatron. And if the surprises there weren't enough -- you won't believe what happens just hours later! Optimus Prime recounts the fascinating end of their introduction as he decides the fate of the jailed Megatron.

CHAOS: PART 1! The long-awaited event that will have lasting repercussions on the lives of our heroes and villains gets off to a mega-start! The Autobots land on Cybertron to discover Galvatron's plan is already in effect -- but what is it? What could he possibly want on a dead planet?

Re: IDW Publishing - August 2011 Transformers Comic Solicitations (1226969)
Posted by T-Macksimus on May 22nd, 2011 @ 9:30pm CDT
Work is picking up and I'm considering starting to throw money at the comic series since I won't be buying the toys from the movie. My one biggest concern is that CHAOS may be in some way tied to "Chaos-bringer" or Unicron and I will be seriously pissed if it is. Everyone says that they wanted him in TF3 (which would have SUCKED!!!) and if they bring him back into the comic universe it's going to be just an absolute sh**-fest! The character is DEAD, he died in 19-freaking-86, leave him dead and stop bringing him back into every single cartoon and comic series!

Now watch, after my rant CHAOS will have absolutely nothing to do with Unicron and I'll have gone off for no reason whatsoever.