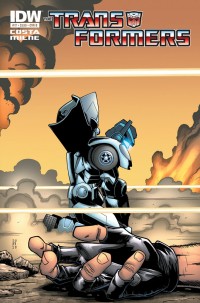 March already? The Infestation crossover comes to an end, and this month will give us three different Transformers Comics. Ongoing continues with Issue 17, while we get Transformers: Prime, Vol 1, featuring screengrabs from the cartoon. The Dark Of The Moon prequel continues with Rising Storm #2. Lastly, a new mini-series is released, Heart of Darkness. Check out the covers, and spoilers below! Mike Costa (w) Alex Milne (a) Matere, Nick Roche (c)
Megatron's plan enters its second stage as the Autobots continue to fall under attack from heavily armed humans. Elsewhere, Starscream attempts to initiate a plan of his own with an old ally. Costa and Milne aren't bringing everyone out of this issue in one piece as the REVENGE OF THE DECEPTICONS continues!
*2 regular covers will be shipped in a 1-to-1 ratio.
FC 32 pages $3.99 TRANSFORMERS: RISING STORM #2 (of 4)
John Barber (w) Carlos Magno (a) Brian Rood (c)
MEGATRON's deadliest plan yet kicks into high gear-it's all-out war! Plus-BUMBLEBEE squares off against BARRICADE for what may prove to be the final time, while OPTIMUS PRIME calls in every AUTOBOT on Earth to put an end to STARSCREAM! The stakes rise in this intense prequel to Transformers 3!
FC 32 pages $3.99 Dan Abnett & Andy Lanning(w) Ulises Farinas (a) Farinas, Casey Coller (c)
GALVATRON. Last seen, he was leading a team of Decepticons through space. Clearly, he has a purpose, an agenda, and a vendetta. But how it will play out and to what end has been shrouded in mystery. That mystery is about to be revealed...
*2 regular covers will be shipped in a 1-to-1 ratio.
FC 32 pages $3.99

Blurrz wrote:Costa and Milne aren't bringing everyone out of this issue in one piece

When has Costa ever left anyone alone?
Re: IDW Publishing - March 2011 Transformers Comic Solicitations (1159660)
Posted by YoungPrime on December 20th, 2010 @ 7:51pm CST
Yeah....I'm not feeling the art work on Galvy here either but I sure hope the story on him is good.

Of course, I know that spins out of Infestation. If they do a paperback collecting that entire story, I may buy that as well.
Re: IDW Publishing - March 2011 Transformers Comic Solicitations (1159950)
Posted by gantzrunner on December 21st, 2010 @ 10:23am CST
Seriously? Does anyone remember when Transformers comics were drawn by artists that actually put time and effort into the artwork? I used to be in awe of the comics I picked up...now all I wanna do is redraw them myself. In recent tf history at least two artists I have been awed by traded their awesome artwork in for cartoony styles and that drives me nuts as well. The Jazz cover looks like a panel blown up to cover size, not at all something used to catch the eye and make you want to read the issue. IDW is slowly turning Transformers into a half-assed cashcow. Normally I don't rant like a jackass but when something I pay money for looks worse than what I can produce myself, I get pretty disappointed

Re: IDW Publishing - March 2011 Transformers Comic Solicitations (1159984)
Posted by kirbenvost on December 21st, 2010 @ 11:34am CST
The FIRST issue of 'International Incident' was great, with EJ Su (I wish they'd let him do all the issues) & a lot more bots...after that it kind of went downhill, but it wasn't terrible. I don't like new Spike though. All that said, I'm still interested.

im kinda piqued by the galvatron mini. the art is definetly different but i dont mind that in small doses and am i being too optimistic in thinking it actually sounds like it might harken back to the ol continuity? ok i know its set after infestation but the NAME has to reference the anti matrix.