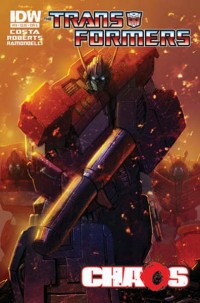 Thanks to the folks over at Comics Continuum, we've got solicitations and spoilers for the upcoming Transformers comics for the month of August. With the Movie-verse comics now but all finished, we only have three comics for this month, two of them Ongoing/Chaos, and the other is the fourth volume of Heart of Darkness. Check out the spoilers and teasers below!

Written by Dan Abnett and Andy Lanning, art and cover by Ulises Farinas.

Galvatron returns! A major power-house villain returns from the Dead Universe with a new purpose, new powers, and a brand new army! Blazing out of the events of INFESTATION and paving the way to Transformers: Chaos -- Heart of Darkness is an essential piece of the ongoing Transformers saga!

"The Last Story on Earth" part 1 of 3! While there is much "Chaos" on Cybertron, there's no less bedlam here on Earth as our remaining Autobots investigate the accusation that Spike, their trusted human ally, murdered a Transfomer in cold oil(?) Now it's up to our heroes to find the truth and decide the fate of human/Cybertronian relations for years to come! Prowl and Jazz take center stage!

"Chaos" rages on! A hole is punched through to the core of Cybertron itself--but what for? Where's Galvatron? And why is Megatron, deep in the Autobot base and stuck in his cell, laughing? It all spells one thing -- trouble with a capital "Crush the Heroes!" Chaos part 2, in which things go from bad, to holy-hell-how-are-we-gonna-get-out-of-this-alive!


Keep it at Seibertron.com for the latest Transformers news on the net!