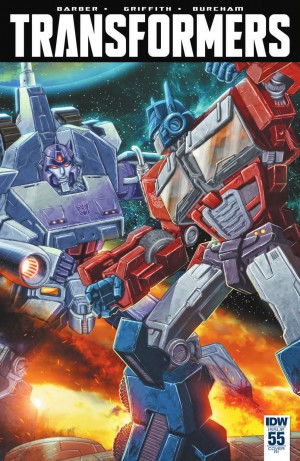 Issue 55 is the wrap to the ‘All Hail Optimus Prime’ story arc. The events have led to this what could be a final confrontation. How does it end? Digitally, some of us already know. In print, some of us waited. It is time.

This issue in a nut shell… CHANGE comes to the forefront. The crux of what it seems to mean to be a Transformer (and a person for that matter). How one reacts, changes, adapts, or doesn’t, and the results…all come to a HEAD.

Galvatron makes like a banana ice cream sundae and SPLITS! His coup de grace, his 4th down drive, his last second shot… all came up short and he lost. Galvatron chooses the noble path: to live to fight another day. Or is he just choosing a more suitable place for what could be his final stand? Who will pursue him? Will he or another Transformer utter the phrase: one shall stand one shall fall?

The answers are found in (and on the cover) of the issue. While Galvatron has always been very staunch in his ideals of purity and expansion echoing Nova Prime (even though at times he found himself at odds with Nova), he does tend to over do at times (understated), and his ideals often mean that whole entire ‘impurities’ can be wiped out. He stretches the truth, he looks out for himself, and uses people. Hence why he’s pretty universally considered a ‘bad guy’.

But Optimus Prime has always been his opposite. Always wanting to preserve and support life. Trying to use noble, honorable, merciful, and peaceful means whenever possible, wanting to believe the best in all…which is pretty hard when you are overseeing a campaign of a four billion jillion year war. It’s these qualities that have always made Optimus Prime able to inspire loyalty.

Optimus' famous quote, his ideal to live by. His belief, along with his uncompromising ideal to seek peaceful solutions whenever possible.

It’s when these two ideals clash, and neither wants to give ground, that we see this arc ending. What will happen when the writing is on the wall? Who will change to achieve goals? Who if anyone will compromise themselves and their ideals?

This issue satisfyingly wraps up the arc, and begins the next. Characters have shown growth and steps have been taken. Like any well-written story, you’re left wanting to continue reading more because you have questions, and the story has answers. When the dust settles where does this leave Earth? With the end we received, Titans Return with perhaps a visit from Onyx Prime seem inevitable. The upcoming IDW REVOLUTION should help to answer other questions that we are left with as well.

The art in this book by Andrew Griffith is hands down incredible! He’s always done impressive work, but I think he’s getting better and better at his craft. The colors by Josh Burcham are well played to support the story, most notably as supportive of setting changes. And as Dr. Va’al credits often, and as an under appreciated part of the visual experience, Tom B. Long adds some incredible letters to the story with some very satisfyingly scripted 'CHOOMs', 'CHAKs', and 'AHs' along with the character dialogue.

I wasn’t really very kind the last time I reviewed Transformers. I felt like it was kind of doing over what had already been done. The upcoming REVOLUTION seems to address that and that’s what appears to lie in our immediate future. This issue allowed me to give the final exhale on this arc, it feels like a finale and I feel satisfied that things are for the moment, settled, and a firm direction has been set. Sadly, future solicits and sudden schedule changes have caused some cats to be out of the bag early, but the issue is still a nice resolution, before we get going again with TITANS RETURN and REVOLUTION.

I like the arc as a hole and it dawned on me last week that this and the dying of light were pretty much the finales of both books. Yeah we're getting some Titans return tie in and Revolution but after its all done, this and and MTMTE ends with ten trades each. I was going to get worried one series would have one more than the other. As a big picture, this was the end of RID and I'm satisfied.

Would you consider shooting hitler murder? Galvatron was robot hitler for crying out loud. The dude was working toward genocide or the entire earth and any cybertronian who he didn't consider "pure".

So predictable.
Re: IDW The Transformers #55 Review (1811706)
Posted by Targetmaster Kup on August 3rd, 2016 @ 11:08am CDT
To me it seemed like in his final moments Galvatron realized the truth of what he had become. But Optimus, who gave Megatron a second chance again, decides he will kill him anyway. To me, Optimus became less likable in this issue. But as others have said, Galvatron has no spark, he is undead and so as long as his head lives, he will live on to Master a new body. Probably one that matches the new Titans Return toy. Then maybe he will get Astrotrain's head

and make him a new body too.

Re: IDW The Transformers #55 Review (1811875)
Posted by Rodimus Prime on August 3rd, 2016 @ 11:45pm CDT
I still have an inkling that all this somehow will end up with the Lost Light arriving on Earth and Megatron and the Autobots confronting Optimus and the Decepticons in the crossover finale arc that leads up to the 100th issue of each story. Megatron vs. Optimus once again, but this time they both changed sides. (I mean, Optimus not really "joining" the Decepticons, just acting like them and taking command of them. Megatron is still co-captain of the Lost Light, isn't he?)
Re: IDW The Transformers #55 Review (1811945)
Posted by Targetmaster Kup on August 4th, 2016 @ 6:45am CDT

Rodimus Prime wrote:I still have an inkling that all this somehow will end up with the Lost Light arriving on Earth and Megatron and the Autobots confronting Optimus and the Decepticons in the crossover finale arc that leads up to the 100th issue of each story. Megatron vs. Optimus once again, but this time they both changed sides. (I mean, Optimus not really "joining" the Decepticons, just acting like them and taking command of them. Megatron is still co-captain of the Lost Light, isn't he?)

Galvatron: fully deserved. Yes he was defenseless, but that was something regretable that needed done.

Overall, a good story arc. I'm wondering how they will do the whole explanation with Metrotitan, considering he did appear to blow up before and then he's on Earth.

and I like the Soundwave/Prime duo. Makes for some fun conversation
Re: IDW The Transformers #55 Review (1812304)
Posted by Genericon #378 on August 5th, 2016 @ 4:44am CDT
Wow IDW, you're doing a great job at killing favourites for absolutely no reason!

I want a reunion party between Soundwave and Megatron. Stat. It'd be wonderful.

And I've said it before, I'll say it again... there's just something so incredibly badass about seeing Optimus and Soundwave team up. Even more than Optimus with Megatron; there's just... I don't know. I love it so much.
Re: IDW The Transformers #55 Review (1812423)
Posted by Kurona on August 5th, 2016 @ 10:40am CDT
So I mean, since Galvatron kicked the bucket, I was thinking about who's actually left of Nova's crew; who isn't dead or turned their back on it. Cyclonus has got new friends, Galvatron's dead, Scourge is dead, Nova's dead, Jhiaxus is dead, Straxus is dead, Grindcore's dead...


Looks like our next big bads are Tailpipe and Hyper-somebody. Can't wait
Re: IDW The Transformers #55 Review (1821083)
Posted by snavej on September 2nd, 2016 @ 12:03pm CDT
So, they were fighting in the upper clouds of Jupiter! The electromagnetic radiation environment is pretty heavy there, so they must have amazing shields. Also, the gravity is approximately 1000 times that of Earth, so their antigravity and/or retro-rockets must be 1000 times more powerful than we see when they're on Earth. I wonder how they all got so juiced up? Were they on Nucleon or Ore 13 or something?

snavej wrote:So, they were fighting in the upper clouds of Jupiter! The electromagnetic radiation environment is pretty heavy there, so they must have amazing shields. Also, the gravity is approximately 1000 times that of Earth, so their antigravity and/or retro-rockets must be 1000 times more powerful than we see when they're on Earth. I wonder how they all got so juiced up? Were they on Nucleon or Ore 13 or something?

Why is Bumblebee, an alien robot, named after an Earth insect?
Re: IDW The Transformers #55 Review (1862865)
Posted by Kurona on February 25th, 2017 @ 7:05am CST
Been reading through this series post-dark cybertron a few times recently because I didn't feel I gave it the chance it really deserved; my initial reading of it was "extra understanding of what happens in MTMTE's universe". So giving it another chance, it's been incredible.

And for reasons I don't feel I can adequately put into words...

This is one of the most powerful lines in Transformers history to me.
It sends chills down my spine. Galvatron goes on this long speech about how everyone has to count on him to combat the bigger threat coming; that there's no way they can hope to stand against it without him, and... and then Prime delivers that.
It's such a brilliant juxtaposition. It's such a brilliant use of the medium and of panel space. It's a fantastic resolution and an amazing subversion of the heroes-and-bad-guys-team-up-to-defeat-bigger-bad-guys trope. And in certain respects, it's politically relevant.

I'm just rambling on here but I just couldn't not comment on it. It's chilling, it's well done, it hints at Optimus' coming character and it's a great way to end the comic with a trope subversion. I love it.

And... one more thing. I think they seeded a contrast to this quite some time ago.