IDW to Appear at First UK Convention in February 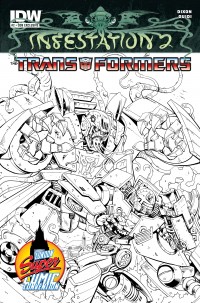 IDW to Appear at First UK Convention in February
Publisher will have booth, panels, exclusives at the inaugural London Super Comic
Convention

San Diego, CA (January 16, 2012)—IDW Publishing will be attending our first-ever UK comic convention when the inaugural London Super Comic Convention, kicks off the weekend of February 25th. In addition to having a booth on the show floor, IDW’s Chief Creative Offier/Editor-in-Chief Chris Ryall will be in attendance participating in an IDW panel, doing portfolio reviews, and promising an exclusive announcement or two as well. The show is billing itself as “the U.K.’s Biggest American Creator-Driven Comic Convention.”

“I’m very happy to be present at the debut London Super Comic show and meeting the fans,” said Chris Ryall. “In fact, I feel like I owe it to our loyal UK fans to make a good first impression at one of their cons, so I’ll be announcing at least one gigantic new series, if not more.”

In addition to portfolio reviews, fans will have chance to pick up a con-exclusive cover for Infestation 2: Transformers, and get books signed by Ryall and creators such as Tony Lee, J.K. Woodward, Phil Jimenez, and others. A full signing and panel schedule will be announced as soon as it is finalized.


Visit IDWPublishing.com to learn more about the company and its top-selling books.


About IDW Publishing
IDW is an award-winning publisher of comic books, graphic novels and trade paperbacks, based in San Diego, California. Renowned for its diverse catalog of licensed and independent titles, IDW publishes some of the most successful and popular titles in the industry, including: Hasbro’s The TRANSFORMERS and G.I. JOE, Paramount’s Star Trek; HBO’s True Blood; the BBC’s DOCTOR WHO; Toho’s Godzilla; and comics and trade collections based on novels by worldwide bestselling author, James Patterson. IDW is also home to the Library of American Comics imprint, which publishes classic comic reprints; Yoe! Books, a partnership with Yoe! Studio.

IDW’s original horror series, 30 Days of Night, was launched as a major motion picture in October 2007 by Sony Pictures and was the #1 film in its first week of release. More information about the company can be found at IDWPublishing.com.