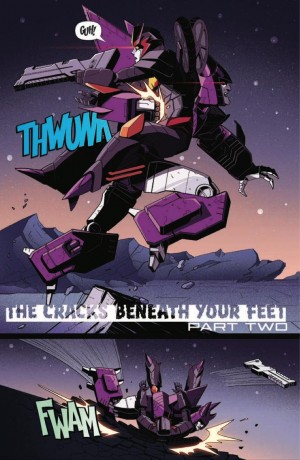 Happy Tuesday Seibertronians! Just in from IDW's homepage we have a quick detail summary of issues #8 and #9 of IDW's Transformers! 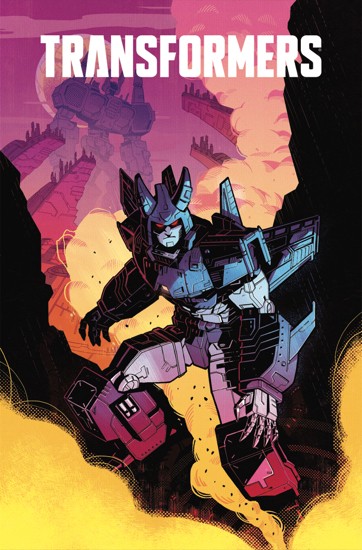 "As Megatron seeks to bring about change to Cybertron, he meets with Termagax, a living piece of Cybertronian history and founder of the Ascenticon movement. Will she set him on the path to peace, or lead him to an unrepairable rupture with the Senate?"
AVAILABLE: June 2019
CREATORS:
Brian Ruckley (Author) • Cachét Whitman (Artist) • Beth McGuire-Smith (Artist) • Anna Malkova (Cover Artist)
IMPRINT: IDW
COLOR: FC

And here's the summary for issue#9: 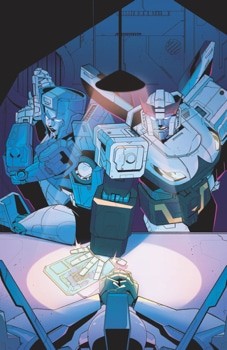 Then Thanks to a few posts from IDW Manager, Creative Development / Senior Editor Tom Waltz at #Transformers on Twitter we have this nice preview page showing the introduction of the new character Termagax! Per Mr. Waltz's summary:
"In #Tranformers #8 (in stores, we finally meet the enigmatic #Termagax! Turns out she likes to talk smack about #Starscream behind his fuselage just like everyone else." 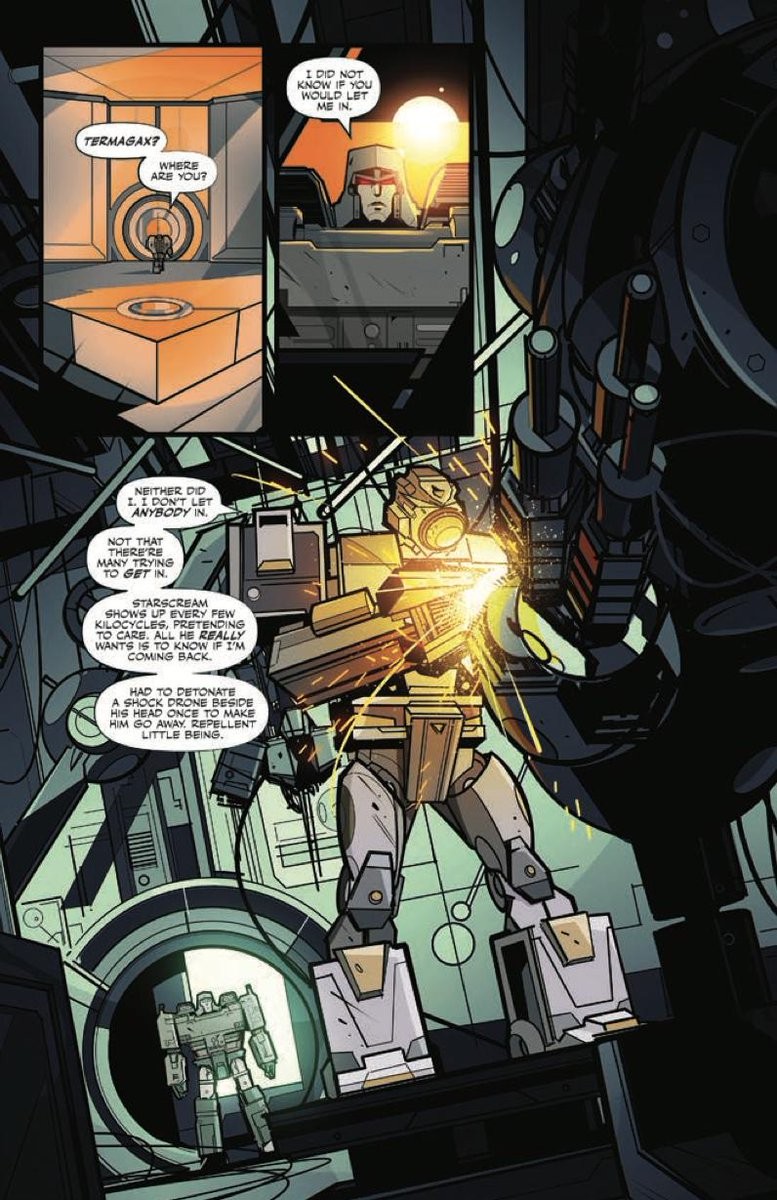 Sounds like she just may be the mother of all Decepticons, literally!
Is she the new Fallen?
Is she the new Terminus?
Will she help Megatron finally find his love for violet chest mounted iconography?

Mr. Waltz also posted this nice image of Cyclonus from issue #8 on his own Twitter account with the tag line:
"In #Transformers #8 #TheCracksBeneathYourFeet Part 2, #Cyclonus has some serious #Flamewar issues he needs to tackle. Literally." 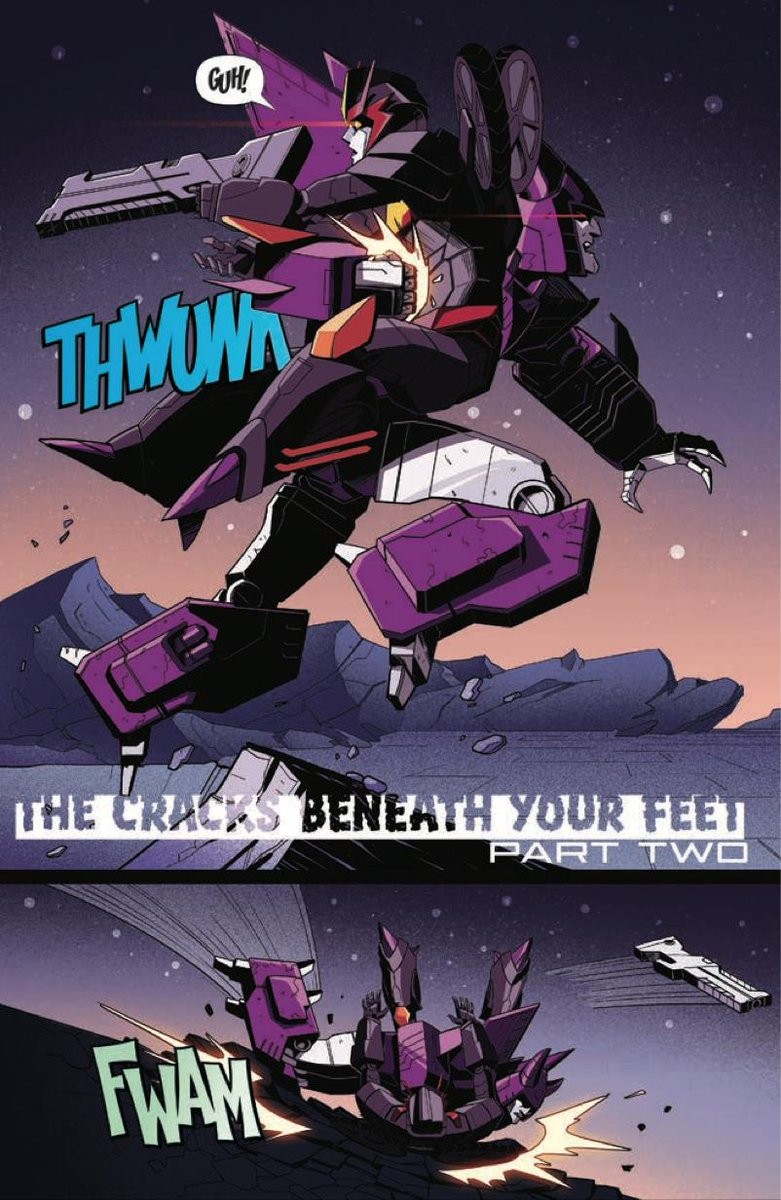 And lastly also from Mr. Waltz's own Twitter page he's also provided a nice black and white preview image of Chromia from issue #9 with the summary:

"Join #Chromia to find out what dangers lurk in the shadows below #Cybertron in #Transformers #9." 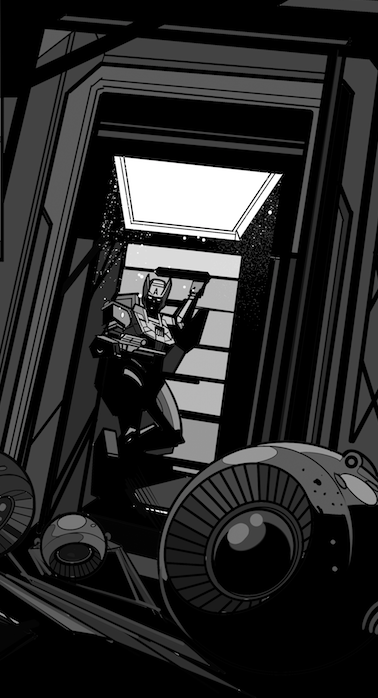 As always enjoy the peruse and share your views with the Seibertron crew!

Big Grim wrote:Hopefully that means the series is gonna start to really pick up. At the moment it's meandering a bit too much. They need to focus a bit more, in my opinion.

Rodimus Prime wrote:I have a question: is the writer brand new at this? Or has he had previous experience?

He has previous experience.
Re: IDW Transformers #8 and #9 Previews (2025294)
Posted by Bounti76 on June 20th, 2019 @ 8:37pm CDT
From IDW Publishing, we have news of a brand new Transformers ongoing book set to debut in September! Titled Transformers: Galaxies, the new series is set to explore the origins of various 'bots in the rebooted IDW continuity via story arcs that focus on one character or group- think of it as a series of extended Spotlight-style stories. Galaxies will be written by Tyler Bleszinski, and art duties will be handled by longtime Transformers artist Livio Ramondelli. 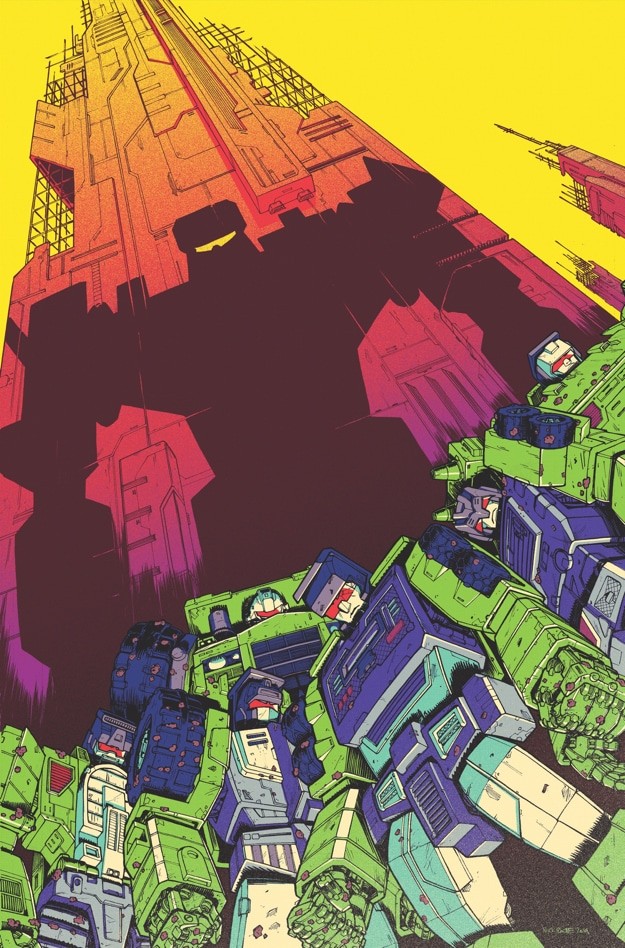 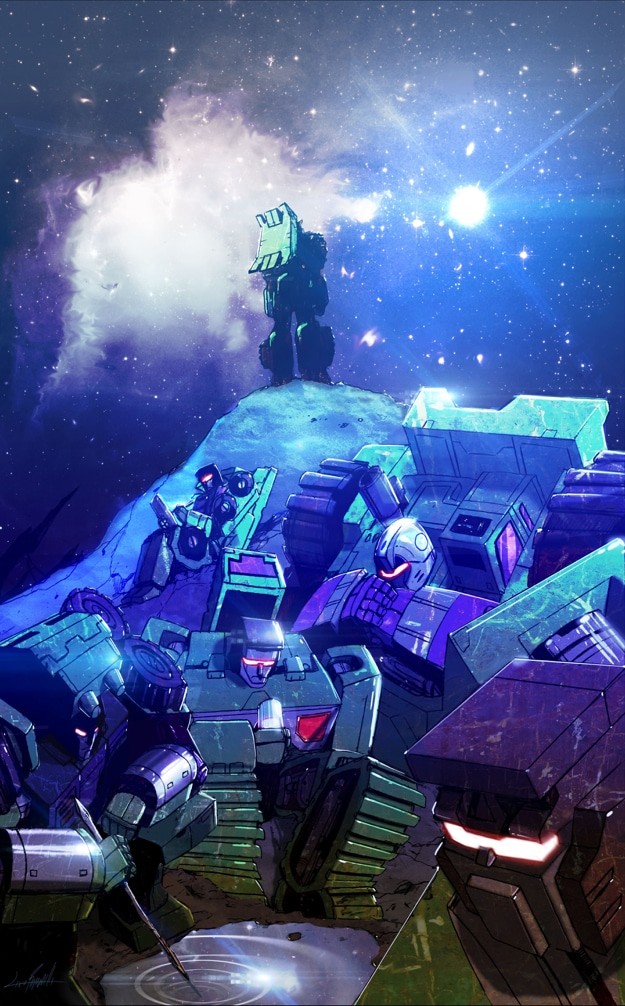 This preview comes to us from Tom Waltz on Twitter, and with an apparent delay the issue is set to come out next Wednesday, July 3.

Check out the page below, and let us know what you think in the comments section below! 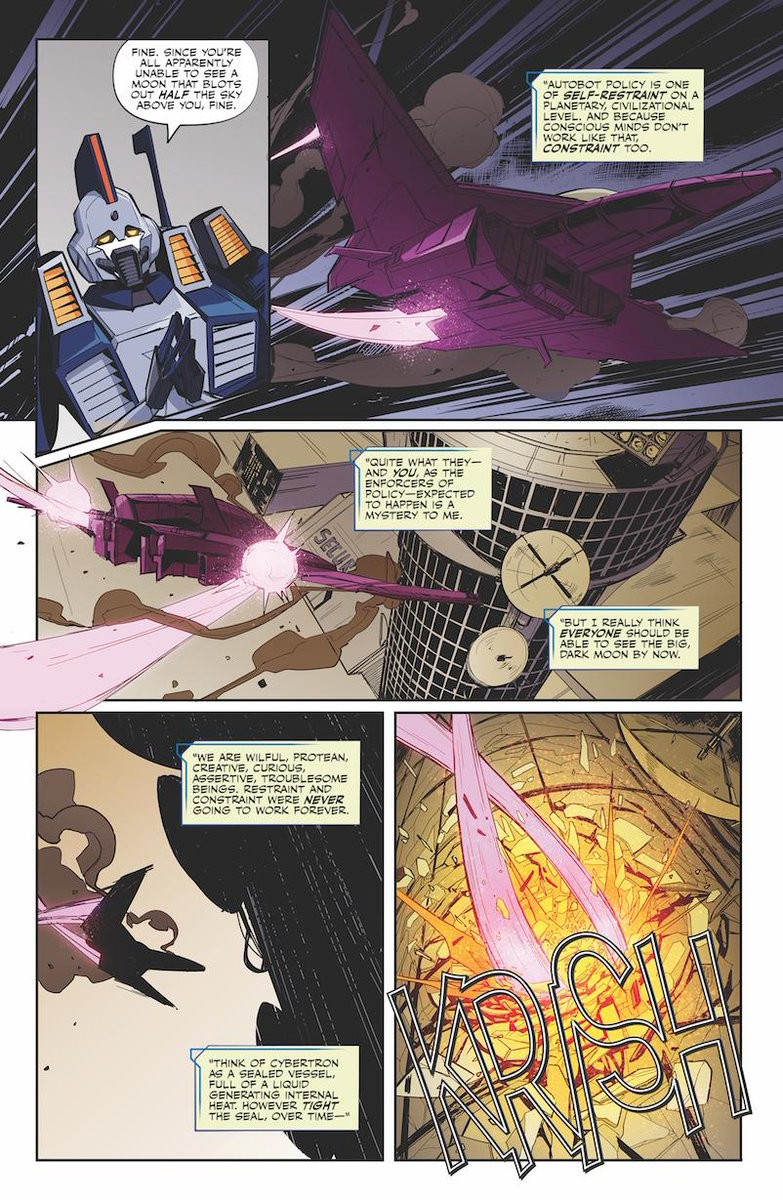 Re: IDW Transformers #8 and #9 Previews (2026019)
Posted by Stargrave on June 26th, 2019 @ 11:47am CDT
Thanks to artist Winston Chan from his Twitter account we have a great image of the cover for issue #13 of the current IDW Transformers! You can see Starscream along with a particular pumpkin-hued Prime in the background with a nicely drawn Prowl and Chromia on the run in the foreground. Check out the image and as always share your view with the Seibertron crew in the forums.

From Winston's Twitter:
"The cover drawn and coloured by me for issue 13 of
@IDWPublishing's new #Transformers comic.
I'm so grateful for the chance to realise a dream. Much thanks to
@IDW_David_M and @TomWaltz.
Hope you all like it." 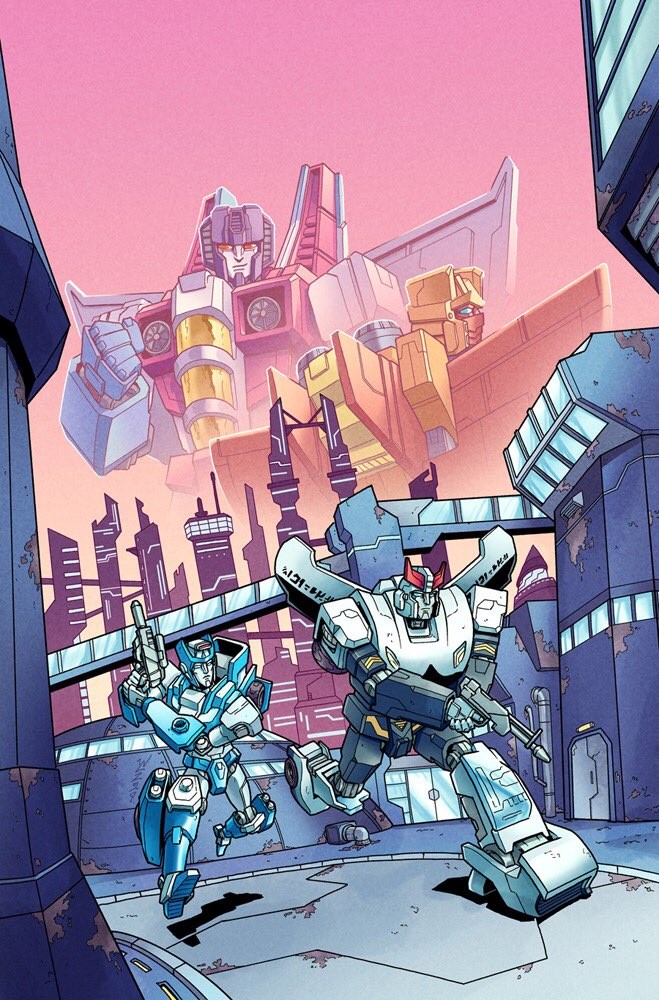 Nice art, but I feel like we had better art before.

Yes I agree with sentinel. I’ve been looking forward to his official introduction even though a small part of me wondered if TR toy would be used. I have the toy. I like it but it’s not the best translated in art. I am hoping for heroic Sentinel Prime and not robot nazi sentinel. Worked for the first IDW but let’s go back to a bot Optimus looked up to.

ZeroWolf wrote:Can I ask for a sentinel prime of the middle ground or one more akin to his Animated incarnation?

It would definitely help show that this is a new continuity and not just a redo of what we already got.
Click here to view additional comments about this topic at the Energon Pub Forums ...