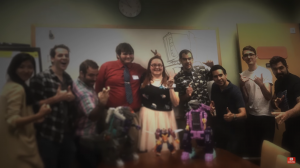 Several months ago, Hasbro sent out a press release highlighting their new campaign to connect faces and names to the gigantic toymaker company, called Hasbro Stories. As a series of short clips on YouTube, they spotlighted employees and departments that sparked the interest of potential viewers, from personal hobbies to connections to the brands they work on, giving a human face to the usually corporate reality for a wider audience.

Well, they're back! We have a whole list of clips for you to enjoy, spanning from My Little Pony to Consumer Care, to Baby Alive and Global Philantropy - and of course, Transformers. Two clips in particular are included below, focusing on Corey and Thor & Amanda. Corey is the eye behind the lens that has taken pretty much all the stock photography images of the figures we know and love (and many other Hasbro products); couple Thor and Amanda met through Transformers, and share an interest with each other, and about each other, and can be seen in a number of images with the franchise and the brand team for our robotic plastic friends. Check out the clips below!