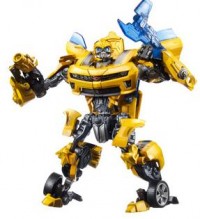 The Hasbro website has been updated with their official press release for Toy Fair 2010. What's new are the clear pictures that accompany the article. Thankfully the press release only goes to the tip of the iceberg - if you missed Seibertron.com's outstanding coverage with over hundreds of pictures, you can check that out here.

HASBRO’S TRANSFORMERS BRAND EXPANDS “MORE THAN MEETS THE EYE” UNIVERSE
On the heels of launching 2009’s largest grossing movie and in anticipation of the next installment in 2011, the TRANSFORMERS brand from Hasbro, Inc. ramps up the play in 2010 with new offerings that build on the energy and excitement from the brand’s history and blockbuster film franchise. Featuring over-the-top action figures, unique role-play items and innovative twists on the TRANSFORMERS brand signature play pattern, the 2010 lineup offers dozens of toys and two exciting promotions to satisfy and excite the brand’s ever-expanding fan base.


This spring the AUTOBOTS, the heroic protectors of Earth, need help from their human allies in the N.E.S.T. GLOBAL ALLIANCE as the planet continues to face threats from the evil DECEPTICONS. Hasbro is inviting kids and fans to join the alliance through a special promotion that is currently underway. By getting the N.E.S.T. ALLIANCE PACK and collecting three stickers included in specially marked TRANSFORMERS products, kids and fans can join the N.E.S.T. GLOBAL ALLIANCE and mail away for a special edition RAVAGE figure not available anywhere else. The promotion requires a payment of $4.95 for shipping and handling charges to receive the special edition figure and the offer is good while supplies last. Requests must be postmarked by April 30 and received by May 14. Then, in the fall, kids can ‘live’ the TRANSFORMERS adventure as the “Hunt for the DECEPTICONS” promotion begins. Look for exciting details about this interactive promotion later in the year.


If fans can’t wait until 2011 for the next TRANSFORMERS movie they can watch online webisodes of “Cyber Missions,” featuring new TRANSFORMERS adventures. “Cyber Missions” finds the AUTOBOTS working with humans in the N.E.S.T. global alliance to defend Earth against the revenge-seeking DECEPTICONS. There will be 12 webisodes total which began airing online at http://www.TRANSFORMERS.com in early January and new webisodes will continue to air throughout the year.

BUMBLEBEE continues to be one of the most popular TRANSFORMERS heroes as he acts as both a defender and a warrior for good. The new BATTLE OPS BUMBLEBEE action figure continues to push the boundaries of TRANSFORMERS toy innovation and showcases two sides of BUMBLEBEE with features unique to each of these roles. For example, when serving as a guardian, BUMBLEBEE features more playful phrases along with authentic engine sounds and lights. Then, when converted into battle mode, BATTLE OPS BUMBLEBEE has missile launchers that pop out, a converting plasma cannon that lights up, and phrases that change to reflect his battle personality.

Expanding upon the essence of DEVASTATOR — a robot built by combining multiple construction vehicles — the TRANSFORMERS brand unveils the new POWER CORE COMBINERS expression that redefines the magic of combination play. The toys deliver an interchangeable system of robots, vehicles and weapons that escalates the level of fun and increases the number of robots within a child’s TRANSFORMERS toy universe.

For those wanting to engage in heroic AUTOBOT role play, the TRANSFORMERS line offers new items including the OPTIMUS PRIME CYBER SWORD toy which features lights, battle and conversion sounds, as well as key phrases from OPTIMUS PRIME.

And for the youngest AUTOBOT-in-training, the TRANSFORMERS brand unveils the new ACTIVATORS expression of action figures. Designed with the youngest TRANSFORMERS fans in mind, ACTIVATORS toys feature easier conversion from vehicle to robot modes than traditional TRANSFORMERS figures and are available in popular characters such as OPTIMUS PRIME, BUMBLEBEE and MEGATRON.

Highlights of new TRANSFORMERS products available in 2010 include:

For more than 25 years, TRANSFORMERS action figures have been known as “ROBOTS IN DISGUISE,” providing fans with the enjoyment of converting incredibly detailed, realistically styled vehicles into awesome battling alien robots. In 2010, Hasbro is offering a wide variety of all-new versions of fan-favorite characters, including OPTIMUS PRIME, BUMBLEBEE, MEGATRON and STARSCREAM in an array of scales: DELUXE, VOYAGER (larger scale), and LEADER (largest scale and includes lights and sounds).

TRANSFORMERS POWER CORE COMBINERS
The TRANSFORMERS POWER CORE COMBINERS introduce fans to an all-new assortment of figures that expand on the classic play pattern of the popular “ROBOTS IN DISGUISE.” This new expression of figures combine with one another, in dozens of variations, to create a wide variety of larger COMBINER robots, with each figure serving as various body parts and weapons. Available in 2-packs and 5-packs.

TRANSFORMERS POWER CORE COMBINERS 5-Pack
(Approximate retail price: $19.99; Ages 5 & up; Available: Fall 2010)
The TRANSFORMERS POWER CORE COMBINERS 5-Pack features teams of TRANSFORMERS characters that can combine together to form one large TRANSFORMERS figure. Each team consists of one SCOUT scale figure and four LEGENDS scale vehicles. The SCOUT scale figure features one ‘vehicle’ mode and two ‘robot’ modes and each of the LEGENDS scale vehicles can plug into the specially marked ports on the central SCOUT scale figure to instantaneously convert into an arm or leg using auto-conversion technology. All figures can be swapped out with one another to form multiple different combinations and new figures. 5-Pack figures are interchangeable with 2-Pack figures.

SPEEDSTARS TRANSFORMERS STEALTH FORCE OPTIMUS PRIME Vehicle
(Ages 4 & Up; Approximate Retail Price: $24.99; Available: Fall 2010)
Featuring electronic lights and sounds, motorized conversions and firing projectiles, kids can “bring to life” the epic TRANSFORMERS battle with this new vehicle from the SPEEDSTARS TRANSFORMERS line. For covert combat, watch as select parts of this OPTIMUS PRIME semi-truck vehicle convert with the touch of a button to reveal stealth mode weaponry hidden inside to battle the evil DECEPTICONS like no other vehicle available.

I always felt that M.A.S.K. was a feeble rip off of Transformers. Now Transformers is ripping off M.A.S.K.!
Re: Official Hasbro Toy Fair 2010 Transformers Press Release (1049243)
Posted by Crystal Rodimus on February 20th, 2010 @ 5:54pm CST
Was wondering when they'd make movie Activators. Bumblebee actually looks pretty good, if a bit super-deformed. Cool regardless.

naw, because half of MASK is the human component, and these don't have that. Plus with the MASK team now a sub-faction of GIJoe, they are just ripping themselves off.
Re: Official Hasbro Toy Fair 2010 Transformers Press Release (1049292)
Posted by UltraPrimal on February 20th, 2010 @ 9:45pm CST
ZOMG! That Activators Bumblebee is tooooooo cute!

I think I'm gonna cry.
Re: Official Hasbro Toy Fair 2010 Transformers Press Release (1049325)
Posted by Fires_Of_Inferno on February 20th, 2010 @ 11:54pm CST
You know, I'm really against all the Bumblebees as much as everyone else here, but that battle blade bumblebee is actually looking interesting. For one he has two hands that both fold back so that he has his cannon and a giant blue axe which is actually pretty damn sweet, his chest looks like it transforms properly, and if I'm not mistaken it looks like his mask slides down, could be wrong though. I mean I already have two bumblebees, the 70's camero one and the screen battles concept camero bumblebee bumblebee. I'd gladly spend money on this one too, and why not? I mean, how many of you bought Cheetor, Transmetal Cheetor, and Transmetal 2 Cheetor?
Re: Official Hasbro Toy Fair 2010 Transformers Press Release (1049326)
Posted by Blurrz on February 20th, 2010 @ 11:56pm CST

Fires_Of_Inferno wrote:I mean, how many of you bought Cheetor, Transmetal Cheetor, and Transmetal 2 Cheetor?

leokearon wrote:I have one question about the 5 pack Power Core Combiners to the limbs have robot modes to do they just transform from alt mode to limb?

'Nuff said.
Re: Official Hasbro Toy Fair 2010 Transformers Press Release (1049749)
Posted by icenemesis on February 22nd, 2010 @ 4:32pm CST
I don't know about you all, but that new deluxe BB look sweet. he has both his hands and has two awesome weapons. though where did he get the axe?
Click here to view additional comments about this topic at the Energon Pub Forums ...