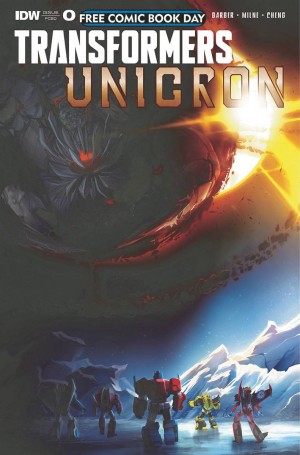 Synopsis
Not a whimper, nor a bang-the end comes with a squall of entropy shrieking from the ravenous maw of death itself. The message is clear: Unicron has arrived. The Transformers lock into a desperate bid to save Rom's homeworld from the world-killer - but why has Unicron chosen this world on his path to Cybertron... and Earth? The biggest story in the history of Transformers starts now: for Unicron's arrival can mean nothing less than the end of a universe.

a narrative universe, that is

Story
First things first: this issue is part of the Free Comic Book Day initiative, in which participating physical comics stores give out free copies of comic books from a number of publishers. If you don't know where to find a store near you, try this tool (works relatively accurately outside of US and Canada too)!

Second: even just the opening, and the preview, of this book will spoil at least one and a half storylines from the current Optimus Prime ongoing series. The cover does too. So that's that, and we all know now. I will not dwell on it further, but if you'd rather wait for the next two issues of OP to hit before finding this issue, do so! 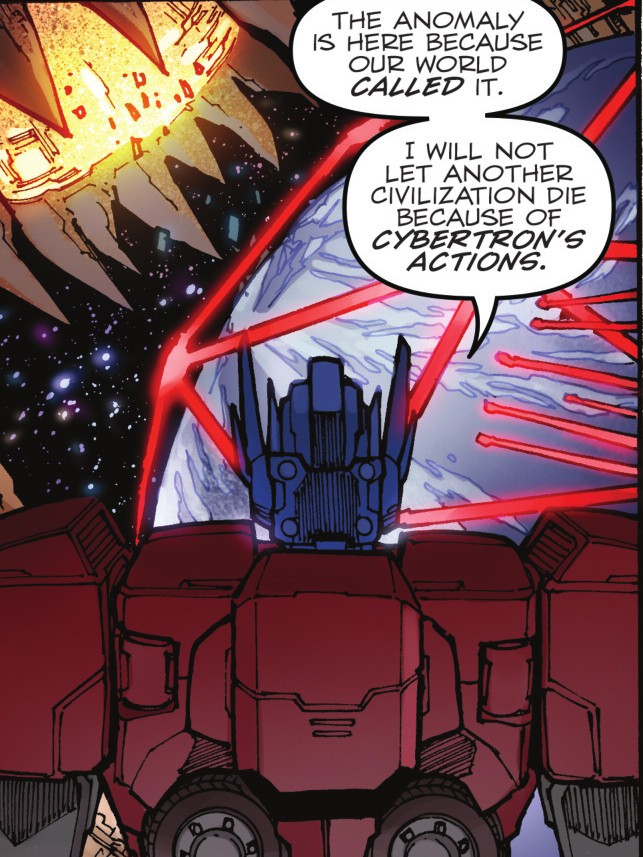 Now, into the main course: John Barber brings Unicron to the Transformers universe, fully, entirely, wholly and viciously . And I really mean that last one. There is no sympathy from me towards those asking for the entire IDW universe casts to be annihilated as the continuity ends, but it looks like Barber is definitely starting to trim those down from the get go (a recurring theme since David Mariotte's arrival on editorial, now that I think about it...) - and not even in the main part of the story.

Optimus Prime is the more or less de facto narrator (his caption tag says so), and the technique is one that will be familiar to all of Barber's readers - but even so, this ..thing, this threat is new to him too. He does not have prior knowledge. None of the characters beside him do, nor does the Solstar Order, nor does the reader. And that narration helps us - established fans of Transformers, and in the know about the mythos in general - see this new Unicron, this IDW version of him, in a different light.

I give you: OP raising an eyebrow

There are of course some lighter moments, where possible, mostly in the form of wit quickly truncated by the events taking place around the characters (Rom's deadpan behaviour, Wheeljack being himself, Pyra Magna's shade towards Optimus), but for such a short story, there are so many heavy beats that you will most definitely be wanting some more.

Alex Milne, who has had a taste of Elonian blood already in the Shining Armor mini-series that saw the first collaboration between Cybertronians and Rom's Solstar Order (including specific characters in this issue, who reference that fact), returns to similar worlds to bring some painstaking detail to the frames he lays out with almost dark glee. And, most admirably I thought, he gives us a sense of the sheer scale that Unicron holds compared to everything else on the page, without ever fully showing the planet - this is not Unicron's story, after all, but that of the people facing him. 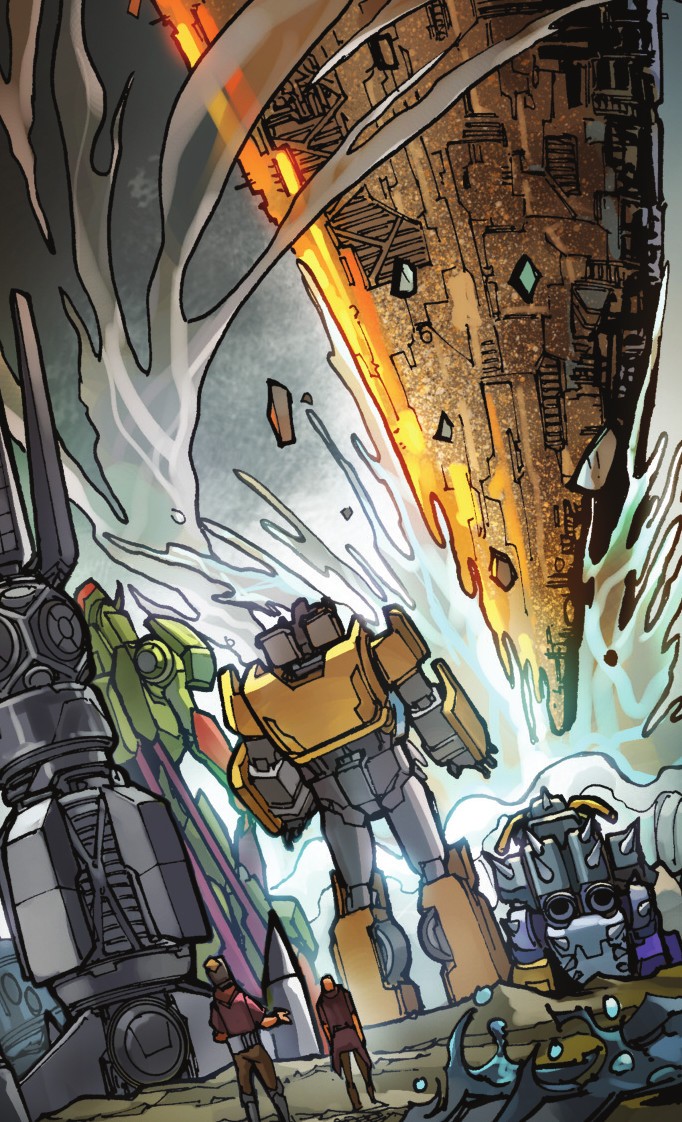 Colours are provided by a previous collaborator of Barber's and a new for Milne, Sebastian Cheng, last seen in Revolution and Revolutionaries. While showing the same vibrancy of some of those series, in fact, he manages to convey some truly dark moments for everyone involved with some impressive lighting angles and surfaces.

What else can I add about Tom B. Long's lettering, really, at this stage - other than reiterate his necessary role in something as vast and encompassing as the entire Hasbro Universe and its unmaker, with captions placed right, dialogue paced out, and a new title redesign that ..just works.

There is just the one cover, being a FCBD comic, but the composition - one that we have seen many a time, is a pretty good reminder of the immense powers at work on the universe right here, and Sara Pitre Durocher delivers.

As I said above, the pacing that Barber has created - by dropping us into the story exactly as it's happening (unavoidable, given the scheduling of the book compared to the ones leading into it) and building to it through Revolutionaries and Optimus Prime, Shining Armor, and the early days of exRID - allows for some pretty breakneck reading and experiencing of the heavier moments taking place in the pretty short issue. And it's done in such a way that will allow several readers to really want to get into the main story come July, while not relying on senseless shock value twists or carnage for its own sake (yes, we all know what I'm referring to here). 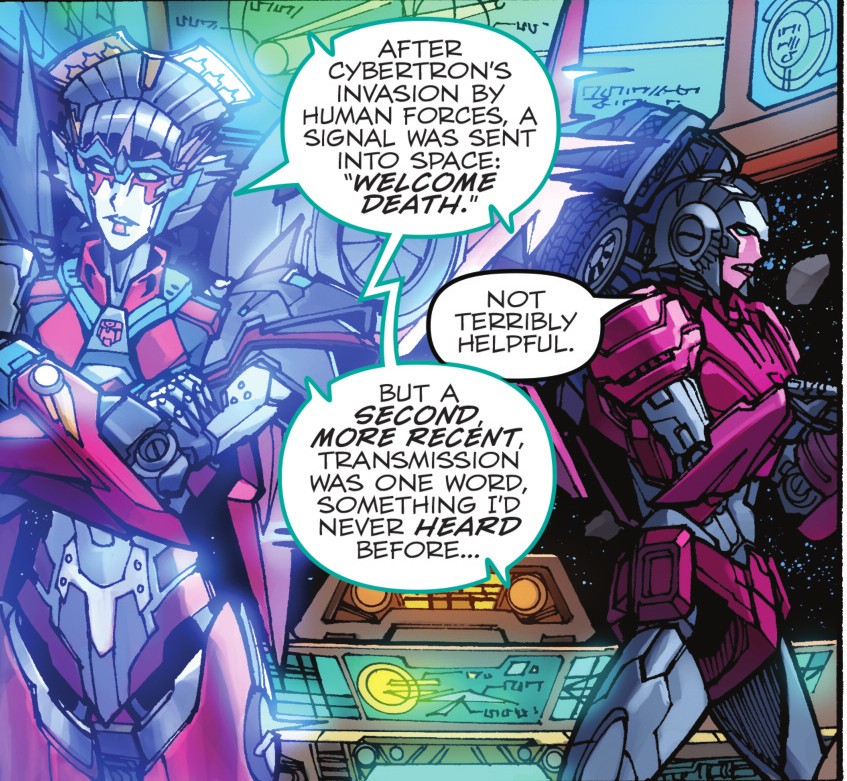 Milne and Cheng work really well together too, which is a low-key relief. Having seen both of their work apart from each other, I wasn't entirely sure it would end up looking this good, and am excited to see more (even just on covers, like for Unicron #1). The extra treat in the book, though? John Barber's letter at the very end, tidying up a lot of the threads that have lead to this moment, and initially written in January - there's Revolutionaries, Dark Cybertron, exRID, First Strike, and more, laid out for readers who wanted to follow up without keeping everything at hand. It's good. It's Barber. It's good Barber.

Re: Review of IDW Transformers Unicron #0 - #FCBD (1957766)
Posted by ZeroWolf on May 5th, 2018 @ 3:09am CDT
This story arc has got a lot to live up to but I have trust in barber. I still think unicron will be gone at the end (maybe they'll use magic and then shift unicron into the new continuity, so it becomes their problem

AllNewSuperRobot wrote:I took the plunge. It is Unicron after all. I've pre-ordered issues 1 & 2 so far. This #0 one doesn't seem to exist physically online though? Is it required reading for issue 1 or will it be part of that issue, for those that miss out??

you may find 0 after today - but it probably is a good idea to obtain. I am sort of iffy on something like this being part of FCBD - because not everyone can get the day off. I was lucky.
Re: Review of IDW Transformers Unicron #0 - #FCBD (1957817)
Posted by Randomhero on May 5th, 2018 @ 2:50pm CDT
I had a theory Unicron was going to be targeting the Ores. Guess I was right.

He’s taking all the ores and doing what Shockwave attempted with Regensis in Dark Cybettron. Much like shockwaves goal was to turn into a singularity that forever feeds off the universe Unicron is doing the same.
Re: Review of IDW Transformers Unicron #0 - #FCBD (1957822)
Posted by D-Maximal_Primal on May 5th, 2018 @ 3:30pm CDT
Picked it up, first time actually being part of free comic book day. Great read, sad story that gives me hope for Unicron.

You killed Wheeljack.... that was so sad.

And what is it now, unicron has eaten 4 colonies and he's starting on Eukaris #5 at the And? Wow. And man he's killed a lot already
Re: Review of IDW Transformers Unicron #0 - #FCBD (1957828)
Posted by rslatt74 on May 5th, 2018 @ 3:47pm CDT
Is it just me or does it look like Rom and his buddy are about to be transformed into Scourge and Cyclonus?

rslatt74 wrote:Is it just me or does it look like Rom and his buddy are about to be transformed into Scourge and Cyclonus?

Black Bumblebee wrote:Maybe I missed it in one of the spin offs (I only really read Lost Light & Optimus Prime), but has it been explained how they got Bumblebee back from the dead (or wherever he was)?

Unless they give Unicron more personality and less irritating (Pyra) and forced (Bumblebee) dialog from the rest this is going to be a bland ending.

2 out of 5 for me.
Click here to view additional comments about this topic at the Energon Pub Forums ...