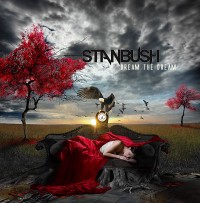 Here at Seibertron.com, Transformers is always going to be our main focus because frankly, that's what our site has always been and always will be mainly about. However, from time to time we're more than happy to venture "outside the box" so to speak and this is definitely one of those times. With that, here's our review of the latest album from Stan Bush, an artist who is well known to the majority of Transformers fans, but who is also someone whose music goes far beyond the world of Transformers.

Melodic Rock, a musical genre that defined much of the 70's and 80's has become an afterthought to some in today's society. Still, fans of bands like Foreigner, Kansas, Survivor, Journey and more continue to admire and appreciate that style to this day. Beyond the classic material, there are actually even some musicians who continue to keep pumping out fresh melodic rock. Stan Bush is one such example. While his name might not be quite as nationally recognized as some, Stan has been recording albums for decades now and his latest offering "Dream the Dream" might well be his best ever. For those of you not familiar with him, Stan is an Emmy award-winning singer-songwriter who is probably most known for his work on several 1980's soundtracks including the 1986 Transformers animated movie, Bloodsport and Kickboxer. One of his songs, "The Touch" has become a major cult hit over the years, having been written for Transformers but later also featured in the film Boogie Nights, on television in episodes of Chuck and American Dad and also as a downloadable track for the Guitar Hero: World Tour video game.

However, Stan's musical talents go far beyond one song, as "Dream the Dream" proves. I actually already own Stan's previous 2 albums, 2004's "Shine" and 2007's "In this Life" so I'm not exactly a stranger to his music. As I've said before, this may well be his best album yet. While I enjoy it, it's simply not going to be for everyone. If your cup of tea is Eminem or Beyonce, well this might not be the best choice for you. For pure melodic rock fans, it doesn't get much better than this. Before you get started, I'd advise cranking up the volume a bit as these songs tend to sound their best when they are played loud. Stan as usual sings his heart out on each and every song and the level of raw emotion that comes through with his vocals can't be understated. Being that they're mixed in with some hard driving guitar, outstanding keyboard work and extremely catchy drumbeats doesn't hurt, either.

I think what strikes me the most about this particular mix of songs though is the overwhelming optimism contained in so many of the lyrics. Too many songs these days seem to either be about shock value or life gone wrong, and it's very seldom you hear music these days with positive messages. The album title "Dream the Dream" is actually very fitting as most of Stan's messages in his lyrics center around things like love and hope and happiness. The title track itself is a great example of this but it's hardly the only one worth checking out. Other personal favorites include "I'm still here," "More than a miracle" and "The Touch: Sam's Theme."

I guess I should give everyone some background on "The Touch - Sam's theme." The original version of "The Touch" is always going to be Stan's signature song. Stan had re-recorded it for "In This Life" but had kept everything intact. However, in 2009 he went in a different direction with another version of "The Touch" that he released to coincide with the release of Transformers: Revenge of the Fallen. It was entitled "The Touch: Sam's Theme" and was quite a departure from the original song. The whole feel of the song had been altered to the point where it now had more of a Linkin Park style. Well, not entirely Linkin Park because Stan had decided to have a rapper accompany him on this song. If you haven't heard it, I'd probably just advise not doing so. So, when I saw "The Touch: Sam's Theme" listed as the final track on this album, I have to admit I sort of groaned to myself. However, this time the rapper has been removed and Stan's lyrics and signing take center stage, and the end result is one of the best tracks not only on this album, but of Stan's career.

Overall I'd highly recommend this album to any Stan Bush fan, as well as fans of melodic rock or just those who enjoy positive and uplifting music. The best place to get "Dream the Dream" and many of Stan's other great albums is at his official website, stanbush.com. The website has just undergone a major overhaul, also so it's definitely worth checking out. Also, sometime in the near future Seibertron.com will be conducting an interview with Stan himself so be sure to keep your eyes peeled for that as well.