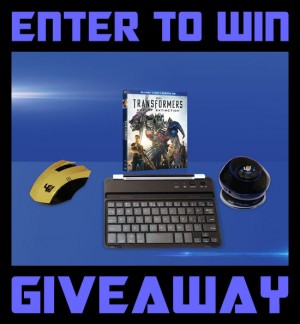 In order to enter this contest, all you have to do is be a registered member of Seibertron.com, enter the contest on this page, and keep your fingers crossed! Not a member yet? Click here to join. Already a member? Click here to sign in. The winners will be announced on Tuesday, October 7th, 2014. 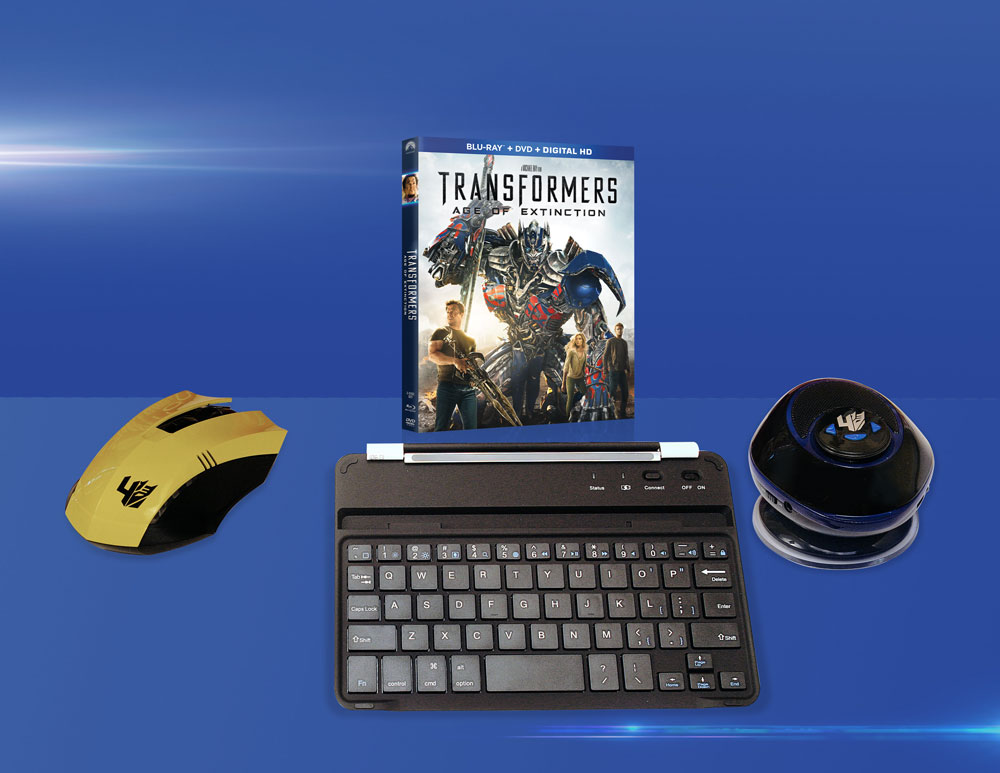 The following text is the official press release from Paramount Home Entertainment regarding Transformers Age of Extinction's release on Blu-Ray and DVD.

The spectacular Combo Packs also include an in-depth interview with Michael Bay about his approach to the film’s jaw-dropping action sequences, a crash course on the “Bayhem” of being on set for the massive, global production, a revealing look at the design process inside Hasbro Headquarters, and more. Plus there’s even more than meets the eye with the hilarious TRANSFORMERS KREON trailer where KREON figures take you through all of the blockbuster TRANSFORMERS movies. In addition, the Combo Packs include a brand new Angry Bird TRANSFORMERS trailer where birds and pigs turn into Autobots and Deceptihogs, creating havoc on Piggy Island. The Blu-ray 3D includes expanded images as seen in IMAX™ theaters.

Disc 2 (Blu-ray):
* Bay On Action - In-depth interview with Michael Bay about his vision and approach to the film’s mind-blowing action sequences.
* Evolution Within Extinction:
--Generation 2 - A look at where the fourth film picks up as we meet new faces - both man and machine - and a Transformers world after the Battle of Chicago.
--Drive Like Hell - Two entirely re-envisioned models of OPTIMUS PRIME and BUMBLEBEE appear in the film, along with an intimidating new nemesis, LOCKDOWN, as a Lamborghini Aventador plus other incredibly cool cars including a sophisticated Bugatti Veyron and a sleek Pagani Huayra. Check them out and see how actor Jack Reynor learned how to drive his Sonic rally car for the intense chase sequences.
--Small Town, Big Movie - When Transformers rolls into some small Texas towns, the normally quiet and picturesque countryside is suddenly alight with explosive action. Explore the different locations with members of the show's art department and hear from robotics students whose designs appear as part of Cade’s lab.
--Shadow Protocol Activated - Follow the production to Detroit with unprecedented access to GM's Lansing plant and Milford Proving Grounds test track; watch an impressive indoor car chase created in an auto parts factory; return to Chicago where location managers discovered a historical movie theater that served as the backdrop for Cade’s fateful first encounter with OPTIMUS PRIME; and finally travel to Washington state and the unlikely site of a never-used nuclear power plant.
--The Last Stand - A vacant lot in downtown Detroit is turned into a square block of Hong Kong. Watch as it literally takes shape from the ground up - then marvel as the crew blows it up piece by piece.
--The People’s Republic - China plays an extremely prominent role in the film both on-screen and behind-the-scenes; in fact, four Chinese actors were chosen from thousands of applicants on a reality TV show to appear in the movie. In addition, the production traveled to Hong Kong, the beautiful valley of Wulong Karst National Park in Chongqing and the Great Wall in Beijing to capture breathtaking footage.
--Rise of the DINOBOTS - Several new TRANSFORMERS characters make their live-action debut in this film. Get a brief history of the new recruits and then go inside Industrial Light & Magic to see how they were designed and conceptualized for the film.
--The Finishing Touch - Watch Michael Bay work like you’ve never seen him before. The director connects virtually with his Santa Monica headquarters, visits the editing bay and then checks in on the visual effects house in San Francisco - all from the comfort of his Miami home office. Also, get an in-depth look at the music contributions of Imagine Dragons as they collaborate with the film's composer Steve Jablonsky. Finally, get exclusive red carpet access to the film's world premiere in Hong Kong.
* Just Another Giant Effin’ Movie - Discover the fun, frenetic and amazing way a movie like Transformers: Age of Extinction gets made.
* A Spark of Design - Enjoy an exclusive look inside Hasbro's creation of TRANSFORMERS: Age of Extinction Stomp and Chomp Grimlock action figure from concept and development to sculpting and painting, and then ultimately to the assembly line.
* T.J. Miller: Farm Hippie - Actor/comedian T.J. Miller never imagined he’d be part of a massively successful franchise like Transformers so he sets off to personally thank the people who made it possible. Come along as he visits Bay Films, gets some pointers from Kelsey Grammer, and even stops by
Mark Wahlberg’s house in this funny piece.
* KRE-O TRANSFORMERS: Take Us Through the Movies! - OPTIMUS PRIME will bring you up to speed on all of the TRANSFORMERS movies one by one in this hilarious, animated short where the TRANSFORMERS KREON figures act out the movies while building and rebuilding each scene…brick by brick.
* The Angry Birds TRANSFORMERS: Origin Story - Bonus content tells the origin story of how the EggSpark has landed on Piggy Island causing the eggs on the island to turn into evil Egg-bots, wreaking havoc across the whole island. The EggSpark has also caused the Birds and Pigs to turn into Autobots and Deceptihogs, who must team up in order to stop the Egg-bots before it's too late!
* Trailers

The Blu-ray 3D Combo Pack and Blu-ray Combo Pack available for purchase include a Digital Version of the film that can be accessed through UltraViolet™, a new way to collect, access and enjoy movies. With UltraViolet, consumers can add movies to their digital collection in the cloud, and then stream or download them - reliably and securely - to a variety of devices.

Hasbro, Inc. (NASDAQ: HAS) is a branded play company dedicated to fulfilling the fundamental need for play for children and families through the creative expression of the Company’s world class brand portfolio, including TRANSFORMERS, MONOPOLY, PLAY-DOH, MY LITTLE PONY, MAGIC: THE GATHERING, NERF and LITTLEST PET SHOP. From toys and games, to television programming, motion pictures, digital gaming and a comprehensive licensing program, Hasbro strives to delight its global customers with innovative play and entertainment experiences, in a variety of forms and formats, anytime and anywhere. The Company's Hasbro Studios develops and produces television programming for more than 180 territories around the world, and for the U.S. on Hub Network, part of a multi-platform joint venture between Hasbro and Discovery Communications (NASDAQ: DISCA, DISCB, DISCK). Through the company's deep commitment to corporate social responsibility, including philanthropy, Hasbro is helping to build a safe and sustainable world for future generations and to positively impact the lives of millions of children and families every year. It has been recognized for its efforts by being named one of the "World's Most Ethical Companies" and is ranked as one of Corporate Responsibility Magazine's "100 Best Corporate Citizens." Learn more at http://www.hasbro.com

Re: Seibertron.com's "Enter to Win" Transformers Age of Extinction Giveaway from Paramount (1609855)
Posted by RotorstormNZ on September 30th, 2014 @ 3:13pm CDT
Aww, damn my being born on the wrong side of the Pacific to enter!!

Good luck to all

Re: Seibertron.com's "Enter to Win" Transformers Age of Extinction Giveaway from Paramount (1610013)
Posted by MightyMagnus78 on October 1st, 2014 @ 2:50am CDT
Can't enter, so good luck to all those that can.

Or staff members! Talk about a double whammy for me!

Re: Seibertron.com's "Enter to Win" Transformers Age of Extinction Giveaway from Paramount (1610108)
Posted by lonrac on October 1st, 2014 @ 11:19am CDT
Hey, Good luck to all the eligible members