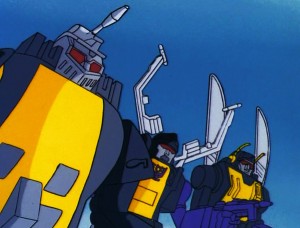 We got some new recovered audio posted by the TransformersAtTheMoon Twitter today, this time from season one, episode fifteen, "A Plague of Insecticons." Featuring the late Wally Burr and his impressive voice talents along with featuring "body English" sessions for the Insecticons voiced by Hal Rayle, Michael Bell and Clive Revill! Be sure to check it out below!

### Additional Dialogue 1 ###
MEGATRON: Giant insects? Well done, Laserbeak. We must intercept them at once. Prepare for aerial rendezvous.

**NEW** MEGATRON: If those insects are really what I think they are. Our Autobot friends are in for a ghastly surprise.

**Note that not all of Skyfire's audio was not recorded during the episode. **

**NOT RECORDED ** SKYFIRE: I can't fly us outta here. That wallop from Kickback shorted my transform circuits.
**NOT RECORDED ** BRAWN: Well, let's look at the bright side. At least they didn't bring that sawed-off nerd Rumble along.

### EXTENDED SCENE ###
SOUNDWAVE: My sensors indicate we are no longer alone.

BRAWN: Give me a toss, Optimus. I wanna teach that bug a lesson!
OPTIMUS PRIME: Uhh! Go get him, Brawn!
BRAWN: Gotcha, beetle-brain!

KICKBACK: Bombshell! Shrapnel! Look! Storm clouds! The day is won!
MEGATRON: What is that idiot-headed grasshopper talking about?
BOMBSHELL: He's talking about the end of the Autobots!
MEGATRON: But our enemy is on the ground, not in the sky.
SHRAPNEL: But our weapon is in the clouds, and Bombshell's explosion has brought it to us-us!

And then Kickback's internal cackling veered so close to Donald Duck that it sounded like a crank call from the New York Ripper!

"Stupid! You're all so stupid! WAKHK-WAHK-WAAAAAAAAHKHKHKHK!"

And here's the Unfinished Animation comparison from the panel:

When the cartoon was on tv, I wasn't really old enough to understand what I was seeing. The first Transformers series that I grew up enjoying was Beast Wars, and I bought the 5 Rhino DVD boxsets later to go through the original cartoon that I had missed. All this time, I thought those hilarious errors were a part of the times and added a level of natural entertainment to the series. Now, I'm finding out that what I'm watching is actually not what aired on television but actually an unfixed version of it?

I'm ok with this. Will likely get the Shout Factory copies to go with my Rhino copies now, so I can make a slideshow of all the errors.
Re: Sunbow Transformers Deleted Audio - A Plague of Insecticons (1947028)
Posted by Bronzewolf on March 19th, 2018 @ 5:13am CDT
TF fan site TFAt TM have posted another installment of their absolutely incredible series of audio clips from the original G1 Transformers cartoon! Pertaining this time to the episode "Heavy Metal War" specifically, the audio gives us not only behind the scenes banter from the likes of Wally Burr, but also extended or deleted scenes! These extra bits and pieces are fascinating to listen to, and they give more context and flesh to these stories we thought we knew so well!

The folks over at TFatTM have posted the newly released audio in YouTube video format, which we've mirrored down below! Below that is a transcript of what you're hearing that highlights who's talking, as well as what's new and/or extended! For more details, visit TFatTM's article via the link above!

SCRAPPER: We return to our master Megatron!

FOREMAN: They're... they're with the Decepticons!

*NEW* Scavenger: I have reading Scrapper, it must be the secret entrance

*NEW* Scrapper: It's about time you did your job, Scavenger. Hook -- activate the entranceway

MEGATRON: My Constructicons have returned to our temporary base right on schedule. They were worth the time we spent building them in these caverns.

*NEW* STARSCREAM: That remains to be seen oh mighty Megatron

MEGATRON: Unload and attach them to your new invention at once.

SCRAPPER: I am honoured to serve, Megatron.

*NEW* SCRAPPER: Interlock the components and synchronize the pulse linkage

MEGATRON: Soon, Starscream, soon, Scrapper's invention will give me the power to defeat the Autobots...

*NEW* OPTIMUS PRIME: You've got us curious, Wheeljack, what's your big surprise? And what does it have to do with -- the Dinobots?

*NEW* IRONHIDE: Oh, get on with it! You take longer to say something than a slow-motion mechano-mouth with the glitch!

*NEW* WHEELJACK: Uh, yes. As you know the Dinobots have always been unpredictable ... and kind of clumsy sometimes ... But I've been reprogramming them ... so just watch!

*NEW* IRONHIDE: Big deal. SO now we got us a Dinobot baseball team that eats the ball!

*NEW* SPIKE: Me too, Wheeljack

*NEW* SPARKPLUG: Right! You did a good job with the big guys

*NEW* WHEELJACK: Thank you, Optimus Prime. I try to do my best. Okay Dinobots ... Transform!

*NEW* GRIMLOCK: Next time. Me, Grimlock, do even better

*NEW* IRONHIDE: Hmmphtf! Now that the Dinobot beauty pageant's over maybe we can ..

SPIKE WITWICKY: Looks like just one, Dad. One's one too many when it's Megatron!

*NEW* CLIFFJUMPER: I got the speed so follow my lead!

*NEW* IRONHIDE: Okay, So you're faster, Cliffjumper -- But Iim tough!

*NEW* OPTIMUS PRIME: Bumblee -- Take out friends out of danger!

MEGATRON: I have come to talk, not fight, Optimus Prime.

*NEW* MEGATRON: Perhaps you will do me the courtesy of hearing me out before you doubt me?

MEGATRON: I come about a matter of Cybertron law, Optimus Prime. Our war has gone on for millions of years -- Decepticons fighting Autobots

*NEW* MEGATRON: with no end or victory in sight

*NEW* OPTIMUS PRIME: A sad but unavoidable truth so long as you seek to dominate the universe.

*NEW* MEGATRON: Nuy Cybertron Law may provide a solution to our seeming dilemma. I refer to the age-old code of combat

MEGATRON: in which opposing leaders -- you and I, Optimus Prime -- may do battle. The loser must exile himself and his army to deep space for eternity. The winner may stay where he chooses. Do you have the courage for that?

MEGATRON: I now have the strength of all my Decepticons.

*NEW* MEGATRON: The unsuspecting Optimus Prime is as good as beaten! (laughs)

*NEW* STARSCREAM: With all due respect, Megatron -- I suggest you not celebrate your victory prematurely ... as there might be one flaw in your otherwise flawless plan.

*NEW* MEGATRON: And what might that be, "loyal" Starscream?

STARSCREAM: The Autobots' computer, Teletraan 1... if it detects your deception, it will alert Optimus Prime.

*NEW* MEGATRON: Teletraan 1 has already been accounted for in my master plan.

MEGATRON: Scrapper, you and the others have your orders. Constructicons, transform!

*NEW* MEGATRON: I chose these caverns as a temporary base because of their nearness to Autobot Headquaters.

MEGATRON: While all the Autobots are assembled to watch my combat with Optimus Prime, my Constructicons will tunnel their way beneath those headquarters, then enter the control room and destroy Teletraan 1! (Laughs) Optimus Prime won't know what hit him! (Laughs)

OPTIMUS PRIME: The code specifies a fair battle, Spike. Under those rules I'm confident I can beat Megatron.

*NEW* IRONHIDE: And if Megatron tries anything cute, we'll rotate his circuits!

*NEW* OPTIMUS PRIME: No, Ironhide. The law of Cybertron must be obeyed and Autobot honour must be preserved. I will fight Megatron alone. I have given my word.

OPTIMUS PRIME: Besides, if he does not abide by the rules, Teletraan 1 will tell us.

*NEW* CHIP: According to my calculations, you shouldn't have much trouble Optimus. Your strength is far greater than Megatron's.

*NEW* SPIKE: Stomp him good, Optimus! He's had it coming for a long, long time.

*NEW* OPTIMUS PRIME: I will do my best not to fail you -- the other Autobots -- or the Earth.

*NEW* MEGATRON: I wouldn't want you walking to the show, that might tip our hand!

*NEW* STARSCREAM: You will remember to return our chips ounce you've used them against Optimus Prime, won't you?

*NEW* IRONHIDE: Strange -- some of those crumbs usually like to show off by changing to their jetplane modes.

*NEW* RATCHET: No biggie, Ironhide. They probably don't want to take the spotlight away from Megatron.

STARSCREAM: And the use of my null ray, too.

*NEW* OPTIMUS PRIME: He never .. did that before!

*NEW* RATCHET: This doesn't print out right! How'd Megatron get so versatile?

*NEW* SPARKPLUG: C'mon, Optimus! You can do it!

SKYWARP: You should see me do that when I've got my power chip.

IRONHIDE: Way to go, Prime! You're not down yet!

*NEW* MEGATRON: Foolish move. I knew you were going to do that!

MEGATRON: (Laughs) You cannot blast what you cannot see!

SPIKE WITWICKY: I can't believe it.

*NEW* SCRAPPER: Then fight! But remember -- the computer is our main objective!

SLUDGE: Sludge not see these Decepticons before.

SNARL: Not see again, either, because we dynamite them to pieces!

*NEW* BONECRUSHER: Blast him! Reduce him to metallic dust!

SPIKE WITWICKY: Hey... check that out! What is it?

*NEW* SLAG: Dinobots no fool around!

IRONHIDE: Our Dino-buddies! We gotta help!

*NEW* STARSCREAM: We could join the battle -- if we still had out powers.

*NEW* MEGATRON: My Devastator needs to help in vanquishing these Dinoboy oafs

IRONHIDE: Uhh... sorry about that.

*NEW* OPTIMUS PRIME: I have a plan to defeat that giant robot.

DEVASTATOR: Nothing defeats the Devastator! Nothing!

Megatron's nixed temporary jet-mode reminds me of his Titans Return toy, both have the fusion cannon underneath. 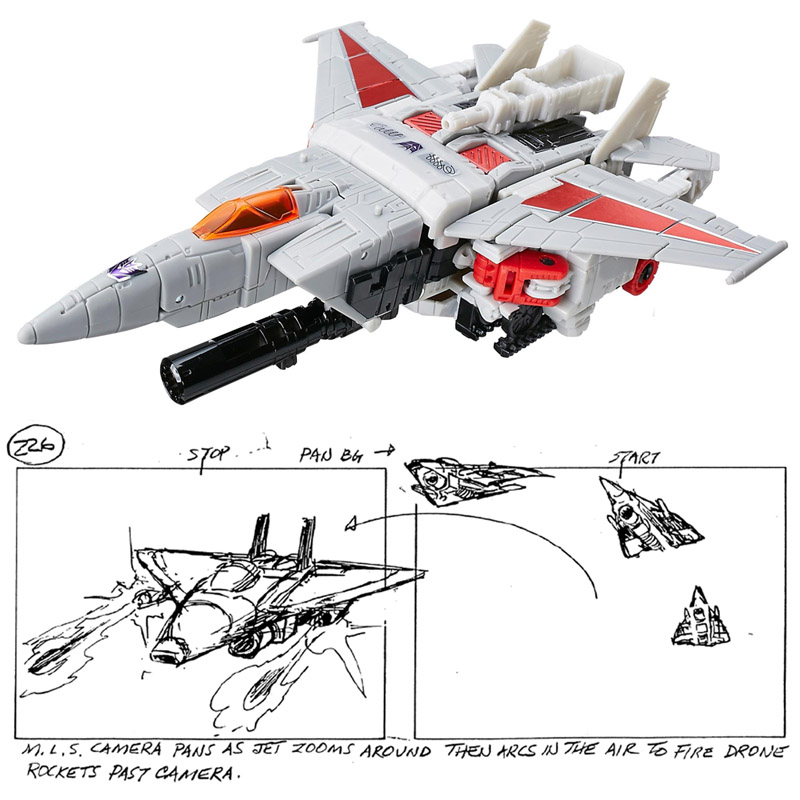