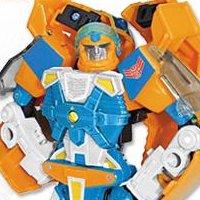 After numerous delays, the Official Transformers Collector's Club membership exclusive figure Dion has started to ship. Members in their forum have reported receiving sipping notices and even the actual figure. So if you're a club member, log in and check out what folks are saying, after you click here.

Seibertron.com will likely be soon featuring a gallery of him, but in the mean time you can view some leaked images we reported on here.

Haven't seen anything about notices in the club forum. Checked my email, and I didn't get one. Only one post from haywire26 about getting his figure in the forum, from what I saw. (Must not be looking hard enough, and I'm too keen on checking the mail box for mine.) He seems to be more excited about getting Coptur than Dion, though.

Membership figure update! We have discontinued the membership card with the free figures. Instead we have put a card online that you can customize with your name. Enjoy!

In place of the membership card that came with the previous five figures, there is now the kind of profile card you get with other TFCC exclusive figures, as well as with BotCon figures (like Razorclaw and Elita-1). Actual tech specs! I wonder how you do the custom membership card...

Tried to post photo proof, but the pic ended up being too big. I'll try doing some with Elita-1 and a couple Primes on my cell phone. see if those are any better.
Re: TFCC Dion Beginning to Ship (1085537)
Posted by ShGarland_1383 on June 12th, 2010 @ 6:59pm CDT
I wonder if it's okay to post the MTMTE bio... The tech spec card is the profile from the Diamond edition Wings of Honor comic, swaping the abilities and weaknesses with traditional technical data...

As for the pic...aside from including Animated Sentinel Prime as the elite commander in my collection, it's pretty much a War Dawn reunion...if I remember right...