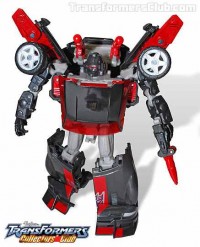 The official Transformers Collectors' Club has sent out the following update regarding the shipping status of the 2012 exclusives Over-Run and Shatter Glass Drift. See below:

This email is going out to all members.

If you did not have an order or have received your order for Over-Run and Drift, please disregard this email.

Here is the latest update on Over-Run and Drift's shipping schedules. Our original order was split into two shipments in China. The first shipment came in the early part of February. The remaining items are coming with the BotCon sets and is on the water now.

We anticipate that the second shipment will arrive here around the first/second week of April. At that time we will finish shipping the remaining orders. The shipments have gone out in the sequence that they were ordered. If your invoice number is higher than 62851 your items will come in a few weeks. We appreciate your patience. If your invoice number is 62851 or lower, your shipment is on its way.

We could have held all the orders until the entire shipment was here, but we felt that it was important to get as many orders out the door as possible and into your hands.

Thanks for your support!

This is a shady club. I will never sign up with these people again. These items should have been here. There is no excuse but the same one they have every year. Why is it we have to wait for Botcon. I ordered on 2/3/2012. Now I have to wait for a convention, and get my item in April. I hate this club

What does that have to do with my order.

FunPub is either doing something shady or they are highly inept...I say both.
Re: TFCC Over-Run and Shattered Glass Drift Shipping Update (1360181)
Posted by Sentinel Maximus on March 19th, 2012 @ 8:26pm CDT
Got mine today!

The figure is awesome!

Terrible thing with this security issue. I changed my visa # right away when it happened. Funpub has alot of 'damage control' ahead of them if they wish any kind of loyalty from the TF fanbase.
Re: TFCC Over-Run and Shattered Glass Drift Shipping Update (1360212)
Posted by Vicalliose on March 19th, 2012 @ 10:10pm CDT
What the- ugh... Oh yeah, I feel SO friggin special right now. Asshats...

Vicalliose wrote:I'm about certain at this point that next year's BotCon is going to have a pretty slim crowd.

I always said 5% of the reason I go to Botcon is the panels, 10% is the dealer room, shopping and the exclusives, and 85% is hanging out with friends. I'm seriously considering saving a few hundred bucks and just seeing my friends on my own time for next year.

Speaking of Botcon, considering how late these are arriving, what would be really nice is if they offered to let us just pick up our exclusives at the convention and reimbursed us for shipping. Provide some ID and a copy of your order receipt and BAM, here's your order. I'm not saying they should have done this as an alternative, considering the amount of people who ordered and aren't going to the convention, but as an option for those that ARE going. Hell, I'll even take the option without the reimbursed shipping - saves me the trouble of having to worry about a package sitting outside my door for four days unattended.