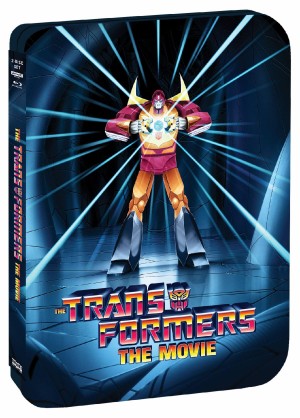 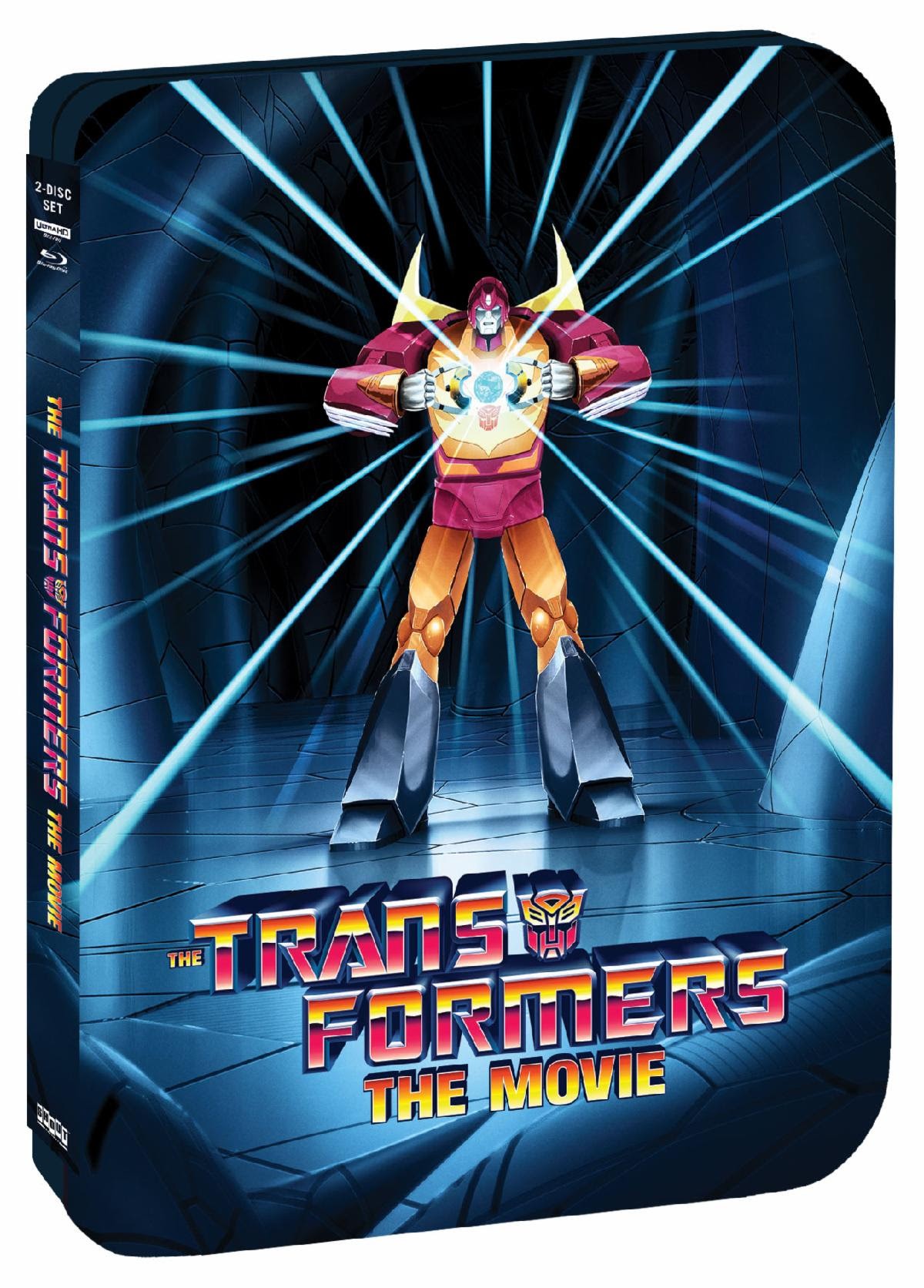 Experience the enormously popular animated feature THE TRANSFORMERS – THE MOVIE like never before! In celebration of the film’s 35th anniversary, THE TRANSFORMERS – THE MOVIE has been meticulously re-restored from a cleaner-than-ever, brand-new 4K transfer of the original 35mm film elements. Fans now can immerse themselves in this thrilling animated adventure with stunning picture quality for the optimal home entertainment experience, in 4K UHD for the first time.

THE TRANSFORMERS – THE MOVIE has captured a special place in the hearts of millions and has been a staple in the pop culture zeitgeist since it premiered in theaters 35 years ago on August 8, 1986. Featuring memorable characters – the heroic AUTOBOTS, villainous DECEPTICONS and UNICRON, thrilling action and a heartfelt storyline, THE TRANSFORMERS – THE MOVIE is a cultural touchstone that spans generations. Beloved by legions of fans, this full-length animated adventure boasts the voice talent of Orson Welles in his final voice acting role and an all-star voice cast that includes Peter Cullen, Eric Idle, Casey Kasem, Judd Nelson, Leonard Nimoy, Robert Stack and Frank Welker.

Under license from Shout! Factory, THE TRANSFORMERS – THE MOVIE SteelBook and standard 4K UHD will also be released in the UK this September.

Whether reliving the excitement from childhood or discovering this animated feature for the first time, THE TRANSFORMERS – THE MOVIE 35th Anniversary Edition is a must-own for fans and collectors and makes the ultimate fan gift!

Movie Synopsis:
The AUTOBOTS, led by the heroic OPTIMUS PRIME, prepare to make a daring attempt to retake their planet from the evil forces of MEGATRON and the DECEPTICONS. Unknown to both sides, a menacing force is heading their way – UNICRON. The only hope of stopping UNICRON lies within the Matrix of Leadership and the AUTOBOT who can rise up and use its power to light their darkest hour. Will the AUTOBOTS be able to save their native planet from destruction or will the DECEPTICONS reign supreme?

THE TRANSFORMERS – THE MOVIE is co-produced and directed by Nelson Shin; produced by Joe Bacal and Tom Griffin; supervising producer, Jay Bacal; executive producers, Margaret Loesch and Lee Gunther; music score by Vince Dicola and Ed Fruge.
﻿
About eOne
Entertainment One Ltd. (eOne) is a talent-driven independent studio that specializes in the development, acquisition, production, financing, distribution and sales of entertainment content. As part of global play and entertainment company Hasbro (NASDAQ: HAS), eOne's expertise spans across film, television and music production and sales; family programming, merchandising and licensing; digital content; and live entertainment. Through its extensive reach and scale, and a deep commitment to high-quality entertainment, eOne unlocks the power and value of creativity.

eOne brings to market both original and existing content, sourcing IP from Hasbro’s portfolio of 1500+ brands, and through a diversified network of creative partners and eOne companies.

About Shout! Factory
Shout! Factory, LLC is a leading multi-platform media company devoted to film and TV distribution, development, and production, as well as the preservation and revitalization of the very best in pop-culture entertainment. Founded by Richard Foos, Bob Emmer, and Garson Foos in 2003, Shout! owns and manages a large portfolio of films, contemporary and classic TV series, animation, and documentaries. The company’s creative acquisition mandate has established it as a leading independent distributor, with partners and properties including GKIDS, Sesame Street, The Carol Burnett Show, The Johnny Carson Show, IFC Films, Stephen J. Cannell Productions, ITV Studios, Major League Baseball Productions, and many others. Shout! Factory Kids focuses on live-action and animated kids and family properties, and the company releases films and television shows in other genres under the Scream Factory and Shout Select imprints. Shout! develops, acquires and distributes new films via Shout! Studios, owns and operates libraries including Mystery Science Theater 3000 (in partnership with creator Joel Hodgson) and the Roger Corman New Horizon Pictures Library, and operates the acclaimed streaming service Shout! Factory TV. Shout! Factory is based in Los Angeles, California. For more on Shout! Factory, visit shoutfactory.com.

oh i see. the blu is full frame. ok i will stick with my original rhino release.
Re: The Transformers: The Movie 35th Anniversary Limited Edition SteelBook Out August 3 from Shout! Factory (2105658)
Posted by o.supreme on May 26th, 2021 @ 7:44am CDT
We've been discussing it here

Anyway, the 4K version is fullscreen, but the BRD is widescreen. You have to understand however that the original film was animated in 4:3 at the time, and cropped for theatrical release, so in this rare case the fullscreen version is the best way to see everything.

I registered just to comment on this topic. Unless I'm mixed up, Shout's press release states the new 4K version is only widescreen, not the complete full screen. If so, that's stupid. My interest in re-re-rebuying the movie has gone down to almost zero. Are they being devious and saving a 4K full screen for the next anniversary? Anyone else care? They got me excited and then disappointed me.
Re: The Transformers: The Movie 35th Anniversary Limited Edition SteelBook Out August 3 from Shout! Factory (2105715)
Posted by First-Aid on May 26th, 2021 @ 8:47pm CDT
Here's the interesting thing. Most TVs now are essentially widescreen aspect ratio so Widescreen really doesn't make much of a difference on modern TVs.

griftimus prime wrote:will this be the real widescreen? or cropped to look widescreen?

oh i see. the blu is full frame. ok i will stick with my original rhino release.

Every movie shot on 35mm film is cropped to 16:9 for widescreen tv’s

Ironically the “full” screen versions of the 86 movie are also cropped
Re: The Transformers: The Movie 35th Anniversary Limited Edition SteelBook Out August 3 from Shout! Factory (2105795)
Posted by Deathsaurus1 on May 28th, 2021 @ 12:37am CDT

griftimus prime wrote:will this be the real widescreen? or cropped to look widescreen?

oh i see. the blu is full frame. ok i will stick with my original rhino release.

Every movie shot on 35mm film is cropped to 16:9 for widescreen tv’s

In addition to "The Touch" music video, it would have been a nice bonus feature on the 4K set if they added the alternate opening crawl and ending dialogue as seen in the UK. I was quite surprised we got that on VHS from Rhino way back when, and I still have that VHS, but it would be nice to watch in an updated format.
Re: The Transformers: The Movie 35th Anniversary Limited Edition SteelBook Out August 3 from Shout! Factory (2105870)
Posted by Jedi Kermit on May 28th, 2021 @ 6:29pm CDT

o.supreme wrote:Understood. But then shouldn't the "Full Screen" version on Sony's 20th anniversary DVD set Disc 2 (2006), and the "Full Frame" Blu Ray Disc on Shout!Factory's 30th anniversary Blu Ray (2016) have the same presentation as the Rhino DVD from 2000?


Not necessarily, it all depends on what source was used in the mastering process for that particular release, how it was mastered, and what aspect ratio was used...hence I refer back to the link in my previous post.


Something else to look at... Look up "Transformers the Movie Reconstructed".....