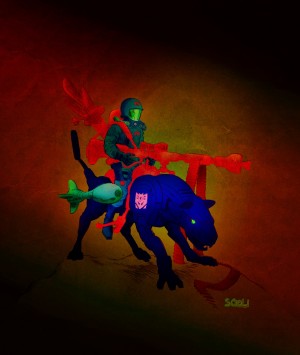 Entertainent news website Newsarama has posted an interview with Tom Scioli, the author and artist of the upcoming Transformers/G.I. Joe crossover. Not much is said about the story itself, but we do get an insight into its conception and Scioli's take on the franchises. Read the whole interview here, and take a look at some preliminary artwork and snippets below!

Here now are excerpts from our long, long geek-out session with Scioli on these great characters and how they warped our childhoods, and a look at some of the behind-the-scenes drawing for the upcoming series. If anything, we did learn this: Scioli is bringing a real passion and love for the characters to this book, and you can get a glimpse of it here.

Newsarama Note: The art shown here is not final, and only represents Scioli’s initial doodles and experiments with the characters’ looks. It does not represent what will appear in the actual series.

Newsarama: Tom, how did this come about?

Tom Scioli: Pretty organically – I sent some samples of my work to IDW, and then I was contacted by John Barber about doing a cover for Black Dynamite, and then I started pitching ideas around the image I’d come up with, and it was a bit too much all at once, but after a while he contacted me with an idea for a Transformers/G.I. Joe comic, this one-sentence pitch. So those were all the steps.

Nrama: This can get confusing, but what continuity does this take place in?

Scioli: My thoughts are that this is its own continuity – they can be similar to other books except for how these worlds interact, or they can be completely different, I hate to change anything without a good reason, but I do like to feel like everything is up for grabs.

There’s no unified continuity for either of these properties – they’ve both existed for a long time, and had their own worlds, but there is no one “right” version.

Nrama: To kind of give this reminiscing a point – these were characters explicitly designed to sell toys. And yet here you and I are, nearly three decades later, we’re talking about them, fans are still going to see the movies, watching the cartoons, buying the toys – why are they so powerful?

Scioli: I think the designs are really strong, that whatever the initial impetus for creating these things was, people still invested the full weight of their imaginations and creativity on them, and so they transcended whatever initial decision-making brought them into being.

Someone like Larry Hama offered whatever he had in terms of life experience and imagination into G.I. Joe, and it’s something that transcends generations, something kids and adults can enjoy years later. Comics are something designed to sell themselves, and I’ve spent might adult life reading and making comics.

The commercial aspect is almost invisible. I think it’s almost beside the point.

This comic could have an amazingly well written and compelling story, but the art will just drag it down and make it seem like the worst thing ever.
Re: Tom Scioli Interview - Transformers / G.I. Joe Crossover (1540787)
Posted by TheForgottenTaxi on January 10th, 2014 @ 7:15am CST
This art looks fantastic!

It's totally different than anything we've seen for the brand in the past, but that's what's so great about it. It's like they let an alternative indie comics guy loose and let him do what he wanted.

My only worry from reading the interview is that he seems like a bigger GI Joe fan than a Transformer fan.
Re: Tom Scioli Interview - Transformers / G.I. Joe Crossover (1540966)
Posted by MGrotusque on January 10th, 2014 @ 5:31pm CST
That Cobra Commander riding Ravage is cringe worthy. It would NEVER happen.