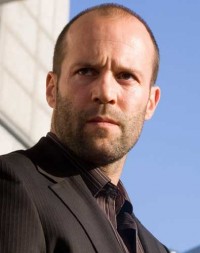 If you have high blood pressure you might want to avoid this rumor, because it comes with a rather sizable pinch of salt. ComicBookMovie.com is reporting that Transformers 4 is rumored to have already been greenlit and action star Jason Statham is in consideration for the new male lead. Shia LaBeouf has stated on several occasions that Dark of the Moon would be his last Transformers film, and as many of you already know Jason Statham is romantically tied to DOTM's new leading lady Rosie Huntington-Whiteley. Does this connection add validity to this rumor? If this came to fruition would it be a continuation or the existing storyline or a reboot? Only time will tell, but for the moment this should most definitely be treated as a rumor.

"One of the stars being mentioned is Rosie’s boyfriend Jason Statham," says a Hollywood insider.

"It’s clear the franchise still has huge potential but with a new leading man capable of taking Transformers in a new, darker direction. Jason could be just the man to do that and his relationship with Rosie would be an added bonus in marketing the movie."

Re: Transformers 4 with Jason Statham? (1253424)
Posted by Hoistimus on July 5th, 2011 @ 11:47pm CDT
Seeing that I'm working on collecting all of Statham's movies (haven't seen the Crank ones yet but I've enjoyed everything else) I'd be OK with this. Problem would be having him drive GMs instead of Audis..
Re: Transformers 4 with Jason Statham? (1253427)
Posted by Sunspot on July 5th, 2011 @ 11:50pm CDT
No that doesn't work for me. We've had enough of brainless action and explosions, which are just Statham's speciality. His emotions range from stone-faced to stone faced with teeth showing. His movies are what we'd like Transformers to stear away from.
Re: Transformers 4 with Jason Statham? (1253428)
Posted by Rodimus Prime on July 5th, 2011 @ 11:50pm CDT
Well, I like him as an actor, he's pretty good. My favorite movie of his is Death Race, and I think he'd be a really good fit for the action parts. They might need a serious dramatic actor (It's TF, but still... ) to carry the story.

As for TF4 itself, I figured there wold be 1, but I thought they might have waited 5-6 years. I was actually wondering if they would go the Indiana Jones route and wait 20 years for #4, with Bay and Shia coming back anyway.
Re: Transformers 4 with Jason Statham? (1253433)
Posted by DavidT on July 5th, 2011 @ 11:58pm CDT
I love Jason Statham movies and he's a pretty good action star, but if they were to use him, it would need to be a reboot for me to like it. I think Christian Bale would be a better choice for an aged Sam! Plus Bale already has experience working with robots LOL... Loved Terminator Salvation!
Re: Transformers 4 with Jason Statham? (1253437)
Posted by OptiMagnus on July 6th, 2011 @ 12:01am CDT
Eh...I don't know. I really liked Shia, actually. I thought he and Rosie were better lead roles together than with Megan Fox. I'd like to see Rosie come back with a similar role, but all these romantic swaps are going to get confusing. I just don't think this guy can work. Plus, we have all these dead characters on the Decepticon side and one important Autobot.. There would end up being...too many new characters, but I could think of a few names to throw in.
Re: Transformers 4 with Jason Statham? (1253438)
Posted by cybercat on July 6th, 2011 @ 12:02am CDT
I love Statham to death and he can carry both a ridiculously high-action stunt movie and actually act. What's more, he has a sort of wry sense of humor I adore.

I think he might be fun in a TF movie, but...not as a continuation of this series. First...there's no one left to kill unless the plot of TF-4 is "Hatchling Stomping". Or Unicron, who's always been a lame villain.

But as a totally new reboot, with a new director?

Sunspot wrote:No that doesn't work for me. We've had enough of brainless action and explosions, which are just Statham's speciality. His emotions range from stone-faced to stone faced with teeth showing. His movies are what we'd like Transformers to stear away from.

Probably the best comment Ive read here in a while. hahaha
Re: Transformers 4 with Jason Statham? (1253449)
Posted by Megatron Wolf on July 6th, 2011 @ 12:19am CDT
Statham is a great action star and all but he wouldnt be a good fit for the lead in a TF movie, wait what the hell am i saying hed fit in perfectly since all TF seems to be is mindless over the top violence with a frak load of explosions. Just reboot the damn thing already.
Re: Transformers 4 with Jason Statham? (1253472)
Posted by Mindmaster on July 6th, 2011 @ 2:12am CDT
Jason who?

Re: Transformers 4 with Jason Statham? (1253480)
Posted by BATTOUSAIXD on July 6th, 2011 @ 2:45am CDT
A continuation of this series is fine with me and if Statham got the lead, it wouldn't bother me. I like him better than Shia, especially if they are going for a darker movie (UNICRON

). I would think it would be hard to still have it take place on Earth with a new human lead, unless Sam is dead or something. So, a space trip to Cybertron would be great (Statham could lead a human team of explorers the Autobots bring with them.) Oh and lately I haven't been able to get the idea of a movie Galvatron out of my head; I think he has some great potential.
Re: Transformers 4 with Jason Statham? (1253488)
Posted by Just Negare on July 6th, 2011 @ 3:38am CDT
I really like teh movies Statham is in, but I'm not under any illusion that he's a certain kind of actor with a very certain sort of style. I couldn't envision him working in a Transformers movie if it was similar to the current 3, if they changed the format to somethign more along his lines it could work.

PLEASE don't reboot. Let's stick with these awesome looking characters.
Re: Transformers 4 with Jason Statham? (1253512)
Posted by partholon on July 6th, 2011 @ 5:09am CDT
considering his age, and obvious age difference at that, if this IS on the level then were either looking at TF 4 being set a decade or so down the line.

or a complete reboot from scratch.

ya have to admit, stratham looks like a bloke that'd work on an oilrig !

SlyTF1 wrote:YES! TF4 1s on the way! Never heard of this guy though.

How have you never heard of Jason Statham? He has been in Crank 1 and 2, The transporter series, the Expendabless, Death Race, The Mechanic, and a bunch of other stuff.

I commandeth thou to seeth a Jason Statham movieeth.

BTW, please let Unicron be in this!

I'd be very interested to see how this could pan out...It could be a very risky gamble, but if his part is right, it could work.

The best film I've seen him in is Death Race and considering the Transformers connections (Tyrese Gibson, Mustang, weapon-loaded vehicles destroying the crap out of each other, etc), it's the one film that's making me think Statham wouldn't be a bad choice...Hmm...

But we shall have to wait and see!
Click here to view additional comments about this topic at the Energon Pub Forums ...