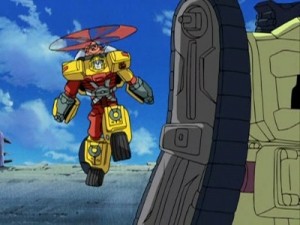 Thanks to our own Sabrblade, we have some interesting news about the
Armada episode 'Remorse'- a second English dub of the episode had been discovered!

Wait.... Armada? And an episode that aired nearly 17 years ago?? Apparently, it was discovered that a streaming service, TubiTV, used the Shout Factory version of the Armada series (instead of the original release on Rhino DVD) and in that episode, a second English dub was discovered that slightly changes some plot details, as well as some lines changing significantly. Read on to discover what Sabrblade found out.

According to a discussion on this TFWiki talk page, a discovery has been made that episode 40 of Armada, "Remorse", was given a second English dub that contains some lines altered from its original English version, as well as the Unicron Battles version of the opening that original premiered with episode 41 instead.

The new lines that have been changed feature a new filter on the Autobots' voices that make them sound even more metallic and monotone than before, and now their dialogue mentions Smokescreen's name having been changed to Hoist two episodes earlier than when his name change was first brought up in Episode 42.

Further details on this are as follows:


Fred had his first line extended from "Is there any way we can fix Optimus?" to add, "the way we fixed up Smokescreen? I mean Hoist?", which required starting the line sooner and made his speech overlap with the animation of him just crying. Red Alert's response was then rewritten some to fit in another mention of Smokescreen's deal, going from...

"I'm sorry. It can't be done. Optimus's body released its Spark when it blocked the Hydra Cannon's blast, and without it, there's no way we can bring him back. I wish there was some way we could, but we're just going to have to pull ourselves together and carry on without him."

"No. I'm sorry, we can't. Optimus's body released its Spark when it blocked the Hydra Cannon. We saved Smokescreen's Spark and were able to reformat him into Hoist. I wish there was some way that we could but... we're just going to have to carry on without him."

This discovery was first found on the Tubi TV streaming version of the episode, and has now been confirmed on Twitter to also exist on the Shout! Factory DVD release of the series, while the original Rhino DVD release had only the first dub version.

This makes me wonder if there might have been any other dub changes made at the time in any other episodes, which could also be found on the Shout! Factory DVD set.

Have any of you Armada fans noticed anything similar, if you have both DVD releases? Let us know below!

Posted 1 day ago
News Categories: Toy News, Movie Related News, Comic Book News, Cartoon News, Site News, Rumors, Event News, Digital Media News, Collectables, Game News, Sponsor News, Site Articles, Store News, Company News, People News, Press Releases, Sightings, Reviews, Unlicensed Products News, Auctions, Transtopia, Interviews, Knock Offs, Collector's Club News, Editorials, Heavy Metal War, Podcast, Contests, Book News, Top Lists
Click here to post your comment about this news story!
Re: Transformers: Armada Episode 40 'Remorse' Discovered to Have a 2nd English Dubbing (2072967)
Posted by o.supreme on July 20th, 2020 @ 9:02pm CDT
I have the entire series on DVD, the originals from Rhino. When it said , different dub, I initially thought it meant a different voice cast ( as in the case of Megatron in the first episode of Cybertron). But sine it's the same voices with different dialogue, that is quite some detective work Sabre. I'll never know Armada well enough to notice any changes in dialogue. I've been watching some BW on Tubi mostly for convenience. It's nice so many TF series Arron there even though I have them all on DVD.

Re: Transformers: Armada Episode 40 'Remorse' Discovered to Have a 2nd English Dubbing (2072975)
Posted by bvzxa on July 20th, 2020 @ 9:35pm CDT
It wouldnt surprise me as Cartoon Network rushed the show to be aired and pretty much the animation was either unfinished or poorly drawn. However in Japan when Micron Legend was released they got the full animation frame by frame for many episodes.

o.supreme wrote:that is quite some detective work Sabre.

Heh, well, all I did was stumble upon the TFWiki talk page discussion. Bag of Magic Food was the user who discovered the change, Chris McFeely looked into it, and Twitter user SBGHaseo confirmed it for him. I'm just the messenger in this case.

But of course, this is not the only instance of a Unicron Trilogy series episode having two different dub versions. Energon's first episode got two different dubs as well. One that aired on TV that was more or less a faithful translation of the Japanese version, and a second new dub that first appeared on Paramount's DVD releases that contained significant line changes, moved some scenes around, and even cut out a shot or two for no good reason (example: A shot of Rad, Carlos, and Alexis as grownups was cut out of this second dub) begging the question of why this second version was made for that episode in the first place when the original version was perfectly serviceable.

The only translation error that was actually corrected by this second dub was a line in the first dub that had Alpha Q declare himself to be a servant of Unicron, which is what he was in the Dreamwave Energon comics but not in the cartoon. This line was omitted in the second dub of the episode, but every other change made to that episode by this second dub just seemed pointless.
Re: Transformers: Armada Episode 40 'Remorse' Discovered to Have a 2nd English Dubbing (2072992)
Posted by TulioDude on July 20th, 2020 @ 10:30pm CDT
Maybe this is the sign we have been looking for!

TulioDude wrote:Maybe this is the sign we have been looking for!

TulioDude wrote:Maybe this is the sign we have been looking for!

o.supreme wrote:I'll never know Armada well enough to notice any changes in dialogue. I've been watching some BW on Tubi mostly for convenience.

Heh, I was only watching casually too, but I like reading TFWiki's write-ups after every story just to be sure I know who every character was and didn't miss anything, so it jumped out at me when the wiki failed to acknowledge new developments like a name change in the same episode. There may have been a few other episodes that had a different version of the intro narration than when online sources tell me each started; I had shrugged it off as Tubi messing around, since swapping the intros would be an easy edit for anyone to make, but if anyone's bored, you could go see if it's the Shout DVDs that differ there too! (You may also need the DVD for this series just because Tubi won't show episode 17, at least in my area right now. It may have something to do with the following episodes 18 through 39 having an issue with the sound leveling where voices are too quiet and/or sound effects are too loud, so maybe they've just been taking episodes down one at a time to work on redoing that.)

And while Tubi's catalog is generally based on the Shout Factory releases, which must be why you can't find the later seasons of Rescue Bots or either series called "Robots in Disguise" there, we also discovered that its Generation 1 episodes are ripped from the old Rhino DVDs, only with most of the commercial bumpers deleted, and with the 2.0 sound mix so you don't hear any of the infamous "bonus" sound effects Rhino added. The series is presented in the episode order from Shout's discs, though!